Dodgers outfielder Cody Bellinger is returning to the injured list with a left hamstring strain.

Los Angeles recalled right-hander Mitch White before Tuesday night’s game against the Philadelphia Phillies to take the roster spot of Bellinger, who left Friday’s game against Texas in the fifth inning.

“We just felt that as we got together with the training staff and Cody to take it out of everyone’s hands, rip the band aid off and get him back to health,” manager Dave Roberts said of the decision after Los Angeles' 5-3 victory over Philadelphia Tuesday night. “We are going to need him the rest of the way and we need him healthy.” 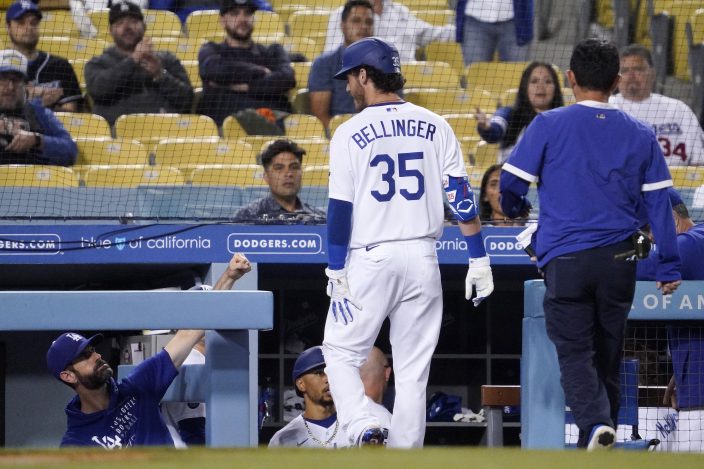 Los Angeles Dodgers' Cody Bellinger holds the back of his leg after being taken out of the game during the fifth inning of a baseball game against the Texas Rangers Friday, June 11, 2021, in Los Angeles. (AP PhotoMark J. Terrill)

The hamstring injury is the latest physical ailment for the 2019 NL MVP. Bellinger missed 46 games earlier this season with a hairline fracture to his left leg. He had shoulder surgery in the offseason.

Bellinger was 10 for 33 with eight RBIs this month. He hit a grand slam — his only homer this season — and set a franchise record with six RBIs in the first inning of the Dodgers' 14-3 rout of the St. Louis Cardinals on June 2.

The defending World Series champions have been hit hard by injuries but still entered Tuesday one game behind first-place San Francisco in the NL West.

Max Muncy was placed on the IL Saturday with an oblique strain. World Series MVP Corey Seager, whose hand was broken by a pitch May 15, is still at least three weeks away from returning to the lineup.

Infielder Gavin Lux, outfielder AJ Pollock and rookie Zach McKinstry have also spent time on the IL. Starting pitcher Dustin May (right elbow) and infielder Edwin Ríos (right shoulder) are out for the remainder of the season, while reliever Corey Knebel (right lat strain) is unlikely to return until the late stages of the season.