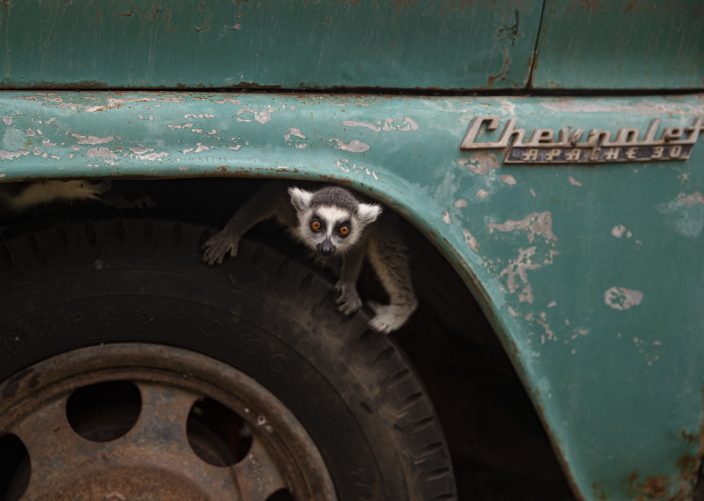 A ring-tailed lemur peeks out from the front tire of a truck inside the Buin Zoo in Santiago, Chile, Tuesday, June 15, 2021. The largest private zoo in Chile, experiencing a serious economic situation due to the closure of its doors as a result of the prolonged quarantine measures, has started a campaign coined, “Sponsor an Animal”, to raise money to maintain the animals. (AP PhotoEsteban Felix) 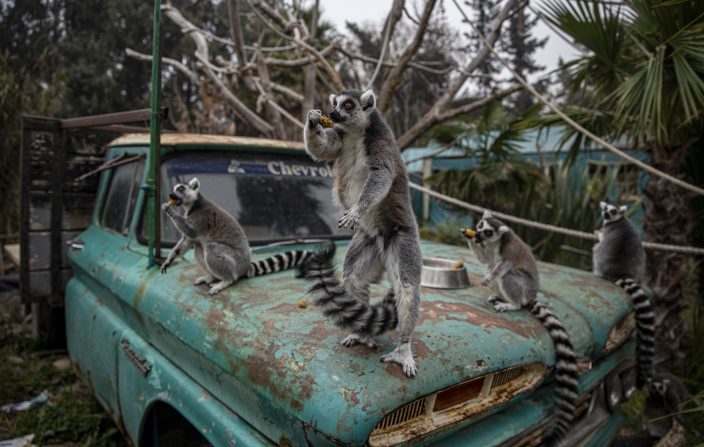 Ring-tailed lemurs sit on the hood of a truck while snacking inside the Buin Zoo in Santiago, Chile, Tuesday, June 15, 2021. The largest private zoo in Chile, experiencing a serious economic situation due to the closure of its doors as a result of the prolonged quarantine measures, has started a campaign coined, “Sponsor an Animal”, to raise money to maintain the animals. (AP PhotoEsteban Felix)

AWOL WEAPONS-SECRECY — The U.S. Army has hidden or downplayed the extent to which its firearms disappear, significantly understating losses and thefts even as some weapons are used in street crimes. The Army’s pattern of secrecy and suppression dates back nearly a decade, when The Associated Press began investigating weapons accountability within the military. Officials fought the release of information for years, then offered misleading answers that contradict internal records. By Kristin M. Hall, James Laporta and Justin Pritchard. SENT: 1,520 words, photos, graphics. An abridged version of 840 words has also been sent.

BIDEN-PUTIN — President Joe Biden and Russia’s Vladimir Putin sit down at last for their highly anticipated summit in Geneva. It’s a moment of high-stakes diplomacy that comes as both leaders agree that U.S.-Russian relations are at an all-time low. By Aamer Madhani and Jonathan Lemire. SENT: 990 words, photos, video. UPCOMING: 1,100 words after 7:35 a.m. meeting begins. With BIDEN-PUTIN-WHAT THEY WANT — A look at what Biden and Putin hope to achieve.

ISRAEL-PALESTINIANS — Israeli aircraft have carried out a series of airstrikes at militant sites in the Gaza Strip, the first such raids since a shaky cease-fire ended the war with Hamas militants last month. The Israeli airstrikes targeted facilities used by Hamas for meetings to plan attacks, the military says, blaming the militant group for any act of violence emanating from Gaza. By Ilan Ben Zion. SENT: 1,040 words, photos.

CHINA-TIBET-CONTESTED-BUDDHISM — High-pressure tactics employed by China’s ruling Communist Party appear to be finding success in separating Tibetans from their traditional Buddhist culture and the influence of the Dalai Lama, a rare and strictly controlled tour of the region showed. By Sam McNeil. SENT: 1,210 words, photos.

LEBANON-MILITARY IN CRISIS — Since the civil war, through wars with Israel, militant bombings and domestic turmoil, Lebanese have considered their military as an anchor for stability, one of the only institutions standing above the country’s divisions. But the military is now threatened by Lebanon’s devastating financial collapse, one of the worst the world has seen in the past 150 years, according to the World Bank. By Zeina Karam and Bassem Mroue. SENT: 1,070 words, photos.

VIRUS-OUTBREAK-SCHOOL-ENROLLMENT — School districts that lost enrollment during the pandemic are looking anxiously to the fall to see how many families stick with the education choices they made over the last year. If the public school enrollment dips persist, schools that lose students eventually could see funding cuts, though pandemic relief money is helping for now. By Kalyn Belsha and Gabrielle Lamarr Lemee of Chalkbeat and Annie Ma and Larry Fenn of The Associated Press. SENT: 1,150 words, photos.

NKOREA-THINNER-KIM — The health of North Korean leader Kim Jong Un has long been a source of morbid fascination in rival South Korea, which sits in the shadow of Kim’s 1.2-million-strong army and his growing arsenal of nuclear-armed missiles. Has he gained even more weight? Is he struggling for breath after relatively short walks? What about that cane? Why did he miss that important state anniversary? By Hyung-Jin Kim and Kim Tong-Hyung. SENT: 510 words, photo.

NEW ZEALAND-GERRARD-INTERVIEW — A scientist who has played a key role in New Zealand’s lauded coronavirus response says the nation used it’s luck well to stamp out the disease and is now eyeing the experiences of other countries to determine when it can reopen its borders. By Nick Perry. SENT: 920 words, photo.

CONGRESS-INFRASTRUCTURE — Patience running thin, Democratic leaders are laying groundwork for a go-it-alone approach on Biden’s big jobs and families infrastructure plans even as the White House continues negotiating with Republicans on a much more scaled back $1 trillion proposal. SENT: 1,010 words, photos.

CONGRESS-VOTING BILLS — Senate Democrats pledge to move ahead with a vote on their sprawling elections and voting bill next week, even as it faces universal opposition from Republicans as well as a key senator from their own party. SENT: 760 words, photos.

MILITARY-SPECIAL OPERATIONS-DIVERSITY — The Navy is developing programs to seek out recruits from more diverse regions of the country. SENT: 1,110 words, photo.

MEXICO-US — In consecutive visits this month, Vice President Kamala Harris and Homeland Security Secretary Alejandro Mayorkas have conveyed to the most important U.S. partner that the Biden administration is taking a more nuanced approach to immigration than its predecessor, but still asking what more Mexico can do. SENT: 890 words, photos.

CHINA-NUCLEAR-POWER-PLANT — A Chinese nuclear power plant near Hong Kong had five broken fuel rods in a reactor but no radioactivity leaked, the government says in its first confirmation of the incident that prompted concern over the facility’s safety. SENT: 500 words, photo.

UNITED-NATIONS-ETHIOPIA-TIGRAY — Ethiopia’s U.N. ambassador says that Eritrean troops who have been fighting with his country’s forces in a war against the Tigray region’s fugitive leaders “will definitely leave soon,” a move that would be welcomed by many including the United Nations whose humanitarian chief accused the Eritreans of using starvation as “a weapon of war.” SENT: 840 words, photo.

TABASCO’S ENVIRONMENT — As storms grow more violent and Louisiana loses more of its coast, the family that makes Tabasco Sauce is fighting erosion in the marshland that buffers its factory from hurricanes and floods. SENT: 930 words, photos.

SPAIN-ELECTRIC-CARS — Spain is Europe’s second-biggest car maker but lags behind when it comes to electric vehicles. SENT: 900 words, photos.

FINANCIAL-MARKETS — Asian shares were mixed in quiet trading ahead of a U.S. Federal Reserve meeting that may give clues on what lies ahead with its massive support for markets. By Business Writer Yuri Kageyama. SENT: 710 words, photos.

CHINA-SPACE STATION — The three members of the first crew to be sent to China’s space station say they’re eager to get to work making their home for the next three months habitable, setting up testing and experiments and preparing for a series of spacewalks. SENT: 920 words, photos.