Woody Johnson is happy to be back. And he wants nothing more than to see the New York Jets become winners.

That, of course, has been the charge of the team's owner and chairman since he took over the franchise is 2000. But Johnson was away from football the last four-plus years while serving the country as the U.S. Ambassador to the United Kingdom under former President Donald Trump.

“There’s a certain element of being a new owner, in a way," Johnson said in his first meeting with reporters since rejoining the franchise. “You have a chance to refresh. I can start a little bit anew.” 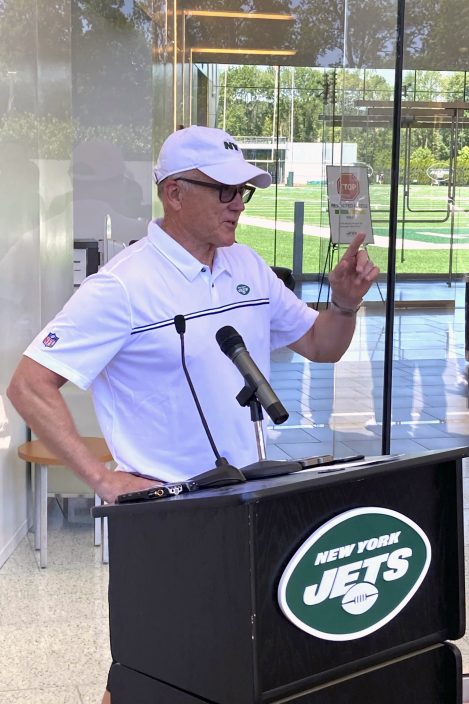 Johnson's focus has returned to the field and he likes what he's seeing from team president Hymie Elhai, general manager Joe Douglas, coach Robert Saleh — and the players, many of whom he met for the first time over the last few months.

“I think the hope that we all feel, that I certainly feel, after being at practice for the last 10 days and seeing the dynamic of the new coach Robert and Joe and Hymie, and how they work together in a new and different way that I haven’t seen before,” Johnson said.

“I think it’s a great harmony here and I’m really excited about it,” he added. “I go to the field and I can see the players — I can see them when they walk out on the field. I can see a little pep in their step. So that’s really, really good to see.”

A lot happened while Johnson was gone.

With his brother Christopher in charge in his absence, the Jets fired coach Todd Bowles, hired Adam Gase and then fired him after two seasons. Mike Maccagnan was fired as the GM, and Douglas replaced him. New York drafted Sam Darnold as its franchise quarterback but has since moved on after three subpar seasons and drafted Zach Wilson with the No. 2 overall pick. There was also last season played during a pandemic, when the Jets went 2-14 and were one of the league's punchlines.

That's something Johnson, of course, wants to see end — while balancing being patient as Douglas and Saleh build a foundation for success on the field.

"I don't think ‘patience’ is the word I'd use," Johnson said. “I feel it here with this team, I feel something that could be special. But it's too early. We're getting better every day, we see our mistakes and how we're progressing. We'll do everything in our power to put a winning team on the field — this year, (every) game.”

Johnson praised his brother's handling of the team through adversity, and he also said he believed he learned a lot about leadership during his tenure as ambassador. He called that role “a gigantic honor" but acknowledged it was difficult to be away from the Jets because that “is the best job you can have in the world.”

Johnson declined to answer a question about Trump's claims that the November election was stolen from him.

“If we could keep it to football, that would be good,” Johnson said.

But he did address accusations from last summer that he made racist and sexist comments while in his role as the ambassador.

“All of those allegations were looked at by the highest levels of the State Department,” Johnson said. "The Office of Civil Rights conducted an extensive survey and all of the allegations and concluded that none of it was substantiated. None of it.”

Johnson said his wife, Suzanne, was “absolutely furious” about the allegations because “this goes against my history and everything I’ve done for my entire life.” Johnson added that the accusations were “very, very hard on me to listen to all this stuff.”

Johnson's tenure as ambassador officially ended in January after President Joe Biden assumed office. Johnson returned to the Jets shortly after, resuming his duties of overseeing the franchise.

And he wants what every other long-suffering Jets fan has desired since Joe Namath led the team to its only Super Bowl title in 1969.

“You’ve got to have faith,” Johnson said. “And you've got to see what's actually going on. This is your team. You’ve probably had this team since you were 10, 11, 12. So you’ve had the faith. You see hope and you see leadership and a group coming together that can deliver to you what you want — and what we want, what the players want."