Manuel Locatelli scored two goals and Italy beat Switzerland 3-0 Wednesday to become the first team to advance to the last 16 of the European Championship.

Locatelli’s first goal came following a textbook exchange with Sassuolo teammate Domenico Berardi midway through the first half in Rome. His second came with a long and low shot shortly after the break that left Switzerland goalkeeper Yann Sommer immobile.

Ciro Immobile added the last goal from long range in the 89th minute. 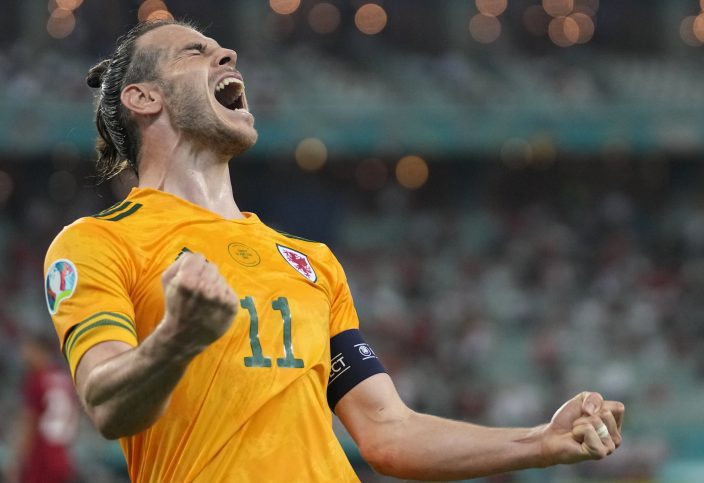 Giorgio Chiellini had a goal waved off by video review early in the match because of a handball. Then the Italy captain exited with an apparent left thigh injury.

As usual — and perhaps the only characteristic carried on from Italy teams of the past — the defense was impenetrable.

It’s quite a turnaround for a team that failed to qualify for the 2018 World Cup.

Wales' Aaron Ramsey, right, controls the ball past Turkey's Yusuf Yazici, center, and Turkey's Caglar Soyuncu during the Euro 2020 soccer championship group A match between Turkey and Wales at at the Baku Olympic Stadium in Baku, Wednesday, June 16, 2021. (Tolga BozogluPool Photo via AP)

Italy extended its unbeaten streak to 29 matches — one shy of the team record — and kept its 10th clean sheet in that run.

Italy leads Group A with a six points. Wales is next with four points, while Switzerland has one and Turkey has zero.

Italy will next play Wales while Switzerland meets Turkey in the final group games. 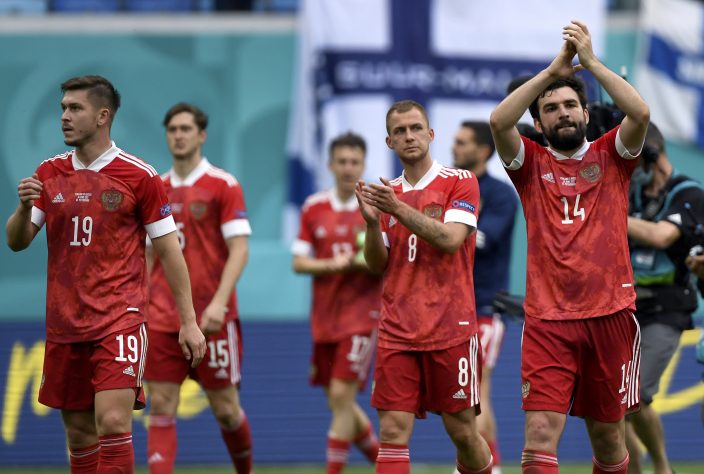 Gareth Bale set up both goals and missed a penalty in Wales’ 2-0 victory over Turkey.

Bale played a lobbed pass over the defense that Aaron Ramsey chested down before knocking it past onrushing Turkey goalkeeper Ugurcan Çakir in the 42nd minute. Connor Roberts scored the second goal in the final seconds of injury time after Bale dribbled along the touchline from a short corner. 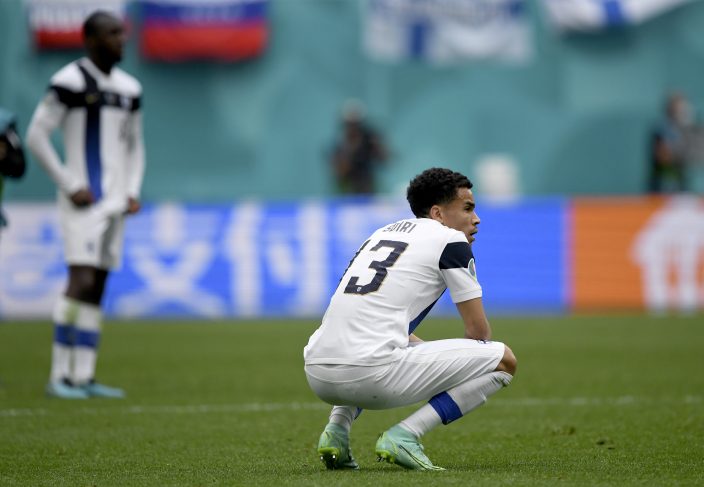 The win moved the Welsh closer to a place in the last 16 with four points in Group A. Turkey has zero points after losing both of its matches.

Bale had a chance to score one himself in the 61st minute but he sent his penalty kick over the bar after being tripped by Zeki Çelik on the edge of the area.

The Wales captain hasn’t scored for his country in 13 games. His last goal came against Croatia in Euro 2020 qualifying in October 2019.

Aleksei Miranchuk finally gave Russia something to smile about at Euro 2020, producing the one moment of class in a chaotic game and giving his team a 1-0 win over Finland.

The big center forward was the focal point of all Russia’s attacks, though this one involved him using good footwork instead of his renowned aerial prowess.

Miranchuk collected the ball on the edge of the area and slipped a short ball forward to Dzyuba, who laid it off deftly back to the playmaker. Miranchuk took one touch to cut inside Finland defender Daniel O’Shaughnessy and, with barely any back-lift, floated his shot beyond goalkeeper Lukas Hradecky and into the top corner in first-half stoppage time.

The pessimism that followed the Russians’ 3-0 loss to Belgium in their opening Group B game was replaced by loud cheers and jubilant chants of “ROSS-I-YA” at the final whistle at Saint Petersburg Stadium.

Russia is tied on points with the Finns, who missed a chance to reach the last 16 with a game to spare with a second straight victory in their first major tournament. Their first victory was 1-0 over Denmark in a match marked by Christian Eriksen’s collapse.