New Orleans Pelicans basketball operations chief David Griffin paused several seconds to compose himself while explaining why Stan Van Gundy is out as coach less than nine months after he was hired to develop a young roster featuring budding superstar Zion Williamson.

“This was something that was very, very difficult,” Griffin said, adding that the need for a new coach "revealed itself over some very open, candid conversations with a really, really good man” during the past three weeks.

While the Pelicans missed the postseason after finishing 10 games below .500, Griffin insisted his team's new coaching vacancy did not result from too few victories. 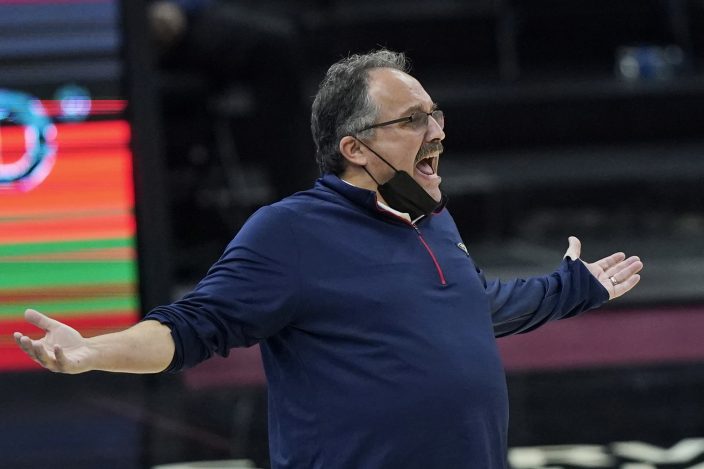 FILE - New Orleans Pelicans head coach Stan Van Gundy reacts in the second half of an NBA basketball game against the Cleveland Cavaliers in Cleveland, in this Sunday, April 11, 2021, file photo. Stan Van Gundy is out as Pelicans coach following just one season at the helm, a person familiar with the situation said. The person spoke to The Associated Press on condition of anonymity Wednesday, June 16, 2021, because the move has not been publicly announced. (AP PhotoTony Dejak, File)

“This was wrought in our philosophical difference in the way we're going to reach the next step in our development," Griffin said. “We don’t have time to waste."

Hired last October, about two months before the start of a pandemic-delayed and shortened season, Van Gundy coached the Pelicans to a 31-41 record. New Orleans finished in 11th place in the Western Conference, two games out of a play-in spot.

Now Griffin will be hiring his second coach in as many seasons after firing Alvin Gentry last summer. 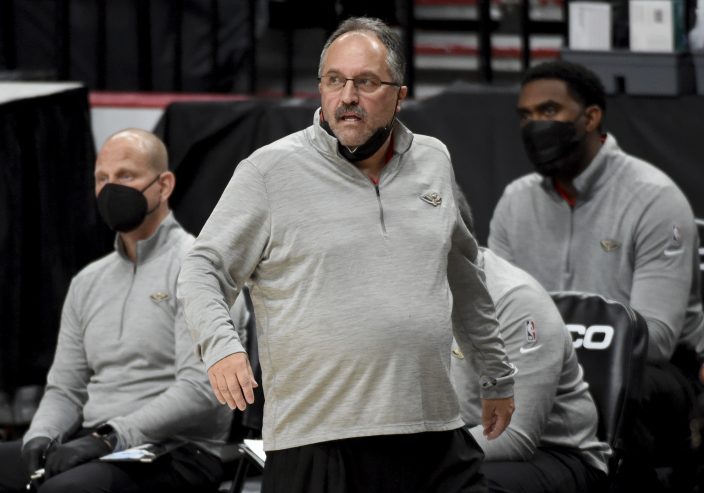 FILE - New Orleans Pelicans coach Stan Van Gundy watches from the bench during the second half of the team's NBA basketball game against the Portland Trail Blazers in Portland, Ore., in this Thursday, March 18, 2021, file photo. Stan Van Gundy is out as Pelicans coach following just one season at the helm, a person familiar with the situation said. The person spoke to The Associated Press on condition of anonymity Wednesday, June 16, 2021, because the move has not been publicly announced. (AP PhotoSteve Dykes, File)

The next coach will be Williamson's third since he entered the NBA as the league's top overall draft choice in 2019.

New Orleans is one of six NBA teams currently with head coaching vacancies. The others are Orlando, Portland, Boston, Indiana and Washington. The Wizards, like the Pelicans, announced their opening Wednesday when they parted ways with Scott Brooks.

Griffin had articulated higher hopes for Van Gundy when he hired the 61-year-old to oversee a roster in which most players were younger than 25.

But star players such as forward Brandon Ingram offered only tepid reviews of Van Gundy when the regular season ended last month.

“It’s OK," Ingram said. “This is our first year together. He has a different coaching style than I’m used to seeing from most.”

Williamson largely thrived under Van Gundy and saw his role expand with a “point-Zion” experiment that featured the agile, 6-foot-7, 284-pound forward as the primary ball-handler. But Williamson also expressed dissatisfaction with the overall direction of the club at season's end.

“Doing the same thing over and over and expecting a different result is kind of insane, so I’m not going to going to sit here and say we’re close,” Williamson said. “The reality of it is it was very disappointing not to be a part of the play-in tournament and stuff.”

The Pelicans blew 14 double-digit leads and had a rash of late-season injuries to key players, including Williamson, before losing five of their final six games.

“We are mindful of the fact that buy-in from your players matters," Griffin said. "At the same time, (the coaching change) wasn’t something they were counseled on in terms of making the decision and I don’t believe it’s going to be a part of the process where we’re leaning deeply on them for that input. ... We’ve built a knowledge base of what it is they need to succeed and that’s our job to act on."

In the recent past, two players — Chris Paul and Anthony Davis — rose to NBA stardom in New Orleans, only to leave in their prime, dissatisfied by the club's direction.

Williamson will be eligible for an extension after next season. Without a new deal, the club could keep him for a fourth season by picking up a team option before he'd become a restricted free agent in the summer of 2023.

Still, Griffin sought to downplay the extent to which the time-frame of Williamson's contract influences him.

“We're not chasing some invisible clock. We're trying to build a sustainable winner,” Griffin said. "You're either all the way in or you're all the way out."

Griffin said some candidates from the coaching search last offseason could be considered again, along with entirely new ones who may not have been available then. Griffin offered high praise for Van Gundy's assistants, saying the next coach could be expected to retain a number of them.

“We've got a group in place that we want to preserve as many of as we can,” Griffin said.

He also didn't rule out elevating a current assistant.

Noting that his lone championship team in Cleveland in 2016 had a first-year head coach in Tryonn Lue, Griffin indicated that experience won't be an overriding factor.

“It can be done a lot of different ways,” Griffin said. “The real issue moving forward is just to find somebody that you’re in lockstep with. ... That has to be something where we’re all moving together in the same spirit and the same sort of energy, and I don’t know how else to put it.”