Newly filed court documents detail gun evidence recovered from the scene of a fatal shooting of a driver during an arrest attempt by members of a federal task force in Minneapolis.

The Minnesota Bureau of Criminal Apprehension has said evidence indicates Winston Boogie Smith Jr., who was Black, fired his gun before he was killed June 3 in a parking ramp in the city's Uptown neighborhood by members of a U.S. Marshals Service fugitive task force. Authorities have said Smith was wanted on a warrant for being a felon in possession of a gun. 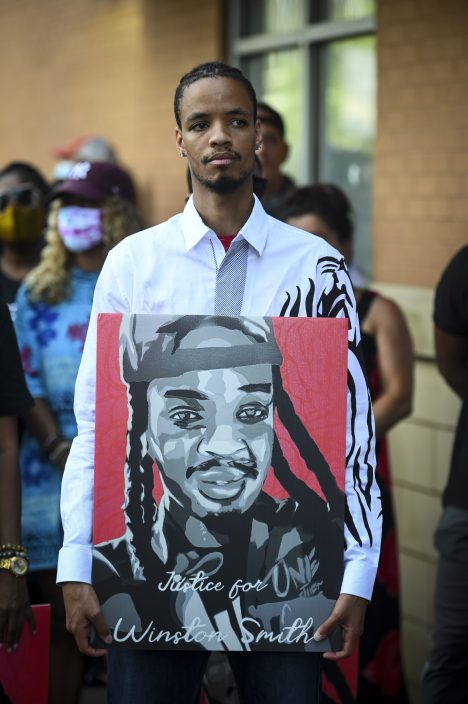 Kidale Smith, brother of Winston Smith, holds a "Justice for Winston Smith" poster during a press conference Thursday, June 10, 2021 in Minneapolis. Attorneys for the woman in a vehicle when members of a federal U.S. Marshals Service task force fatally shot the driver last week said their client never saw a gun on the man or in the vehicle. (Aaron LavinskyStar Tribune via AP)

Attorneys for an unidentified woman who was in the car with Smith said last week that she never saw him with a weapon.

Smith's death happened in a city that has been on edge since the death of George Floyd just over a year ago and the fatal shooting of Daunte Wright by an officer in nearby Brooklyn Center in April.

Smith’s shooting sparked days of protests in the neighborhood as his family members and community members have demanded transparency. Authorities have said there is no body camera or police vehicle camera footage of the shooting.

Deputies who fatally shot man in Minneapolis were undercover