The presidents of Germany and Poland met in Warsaw Thursday to celebrate the 30th anniversary of a key treaty between the two neighbors, focusing on the positive aspects of a sometimes wobbly relationship.

Germany's Frank-Walter Steinmeier held talks with Poland's Andrzej Duda, and attended a meeting with young people from both countries.

The two neighbors are at odds over the Nord Stream 2 gas pipeline linking Germany with Russia. Warsaw strongly opposes what it sees as a political tool for increasing Russian influence in Europe, while Berlin views it as purely a business project. 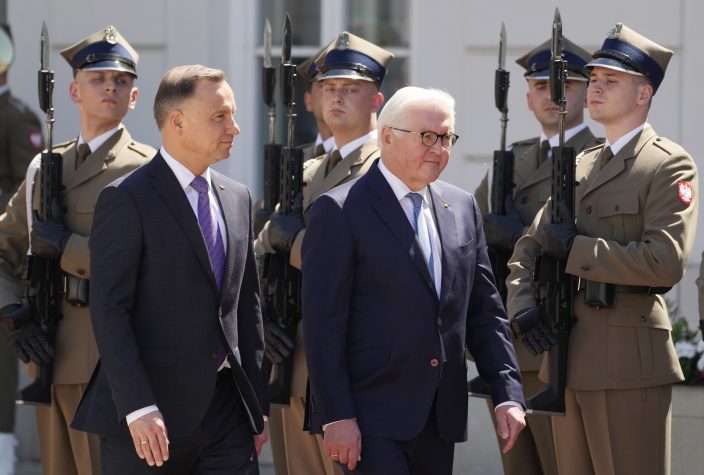 Germany's President Frank-Walter Steinmeier, front right, and his Polish host, President Andrzej Duda, front left, walk during a welcoming ceremony at the Presidential Palace in Warsaw, Poland, Thursday, June 17, 2021 at the start of Steinmeier's brief visit marking 30 years of bilateral good-neighborly relations treaty. Their talks are expected to include the future of the European Union and its tran-Atlantic ties, the developments in Ukraine and Belarus and the divisive Nord Stream 2 gas pipeline between Russia and Germany. (AP PhotoCzarek Sokolowski)

The presidents made no direct reference to the subject at a news conference following their first round of talks.

Steinmeier only said that Germany “takes criticism seriously and will make every effort to achieve reasonable solutions.”

He added that good Polish-German relations were “one of Europe's greatest successes in the past 30 years.”

The presidents also discussed plans underway for a memorial in Berlin to some 3 million Polish victims of the brutal World War II Nazi German occupation. Poland, which Germany invaded in September 1939 — triggering World War II — has been pressing for such a memorial.

Another issue both presidents mentioned was the rights of the German minority in Poland and the Polish minority in Germany.

The good-neighborly relations treaty was signed in 1991 — two years after Poland shed Moscow's dominance and embarked on forging its independent West-oriented policy.

One of the main goals was to put aside the long history of conflicts and warfare between the two countries. Berlin was a strong advocate of including Poland in Western structures such as NATO, which it joined in 1999, and the EU, which it joined in 2004.

Geier Moulson in Berlin contributed to this report.