Look around the world of sports and older athletes are winning.

Phil Mickelson recently became the oldest winner of the PGA at almost 51 years old. Tom Brady won his seventh Super Bowl — with the Tampa Bay Buccaneers this time — at 43 in February.

Jockey Jose Ferrer isn't doing anything as grandiose. He's just leading all jockeys in wins at Monmouth Park in New Jersey after 10 days of racing with 16 wins in 56 mounts, a 29% winning percentage. 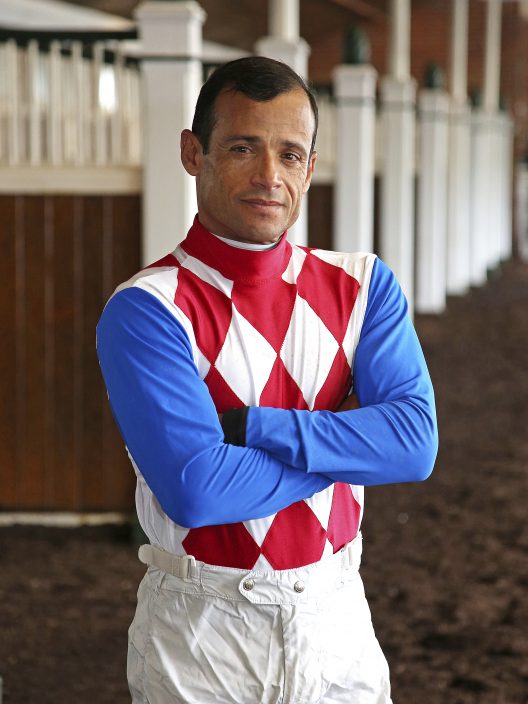 This photo provided by Equi-Photo shows jockey Jose Ferrer posed at Monmouth Park in Oceanport, N.J., Tuesday, June 15, 2021. Just look around the world of sports and athletes are winning events at older ages. Phil Mickelson won the PGA earlier this year at almost 51, and Tom Brady won another Super Bowl _ with the Tampa Bay Buccaneers this time _ at more than 43 in February. Jockey Jose Ferrer isn’t doing anything as grandiose. He’s just leading all jockeys in wins at Monmouth Park in New Jersey after 10 days of racing with 16 wins in 56 mounts. (Bill DenverEqui-Photo via AP)

By the way, Ferrer is 57 heading into Friday's twilight card.

“It’s been fantastic lately. It’s an unbelievable feeling,” said Ferrer, who has ridden 4,575 winners in a career that began in 1982. “You get those times where everything goes right for you, when everything seems to click. That’s where I feel I am now.”

Ferrer has been so hot, he's even winning with unexpected horses. Last weekend he guided 79-1 longshot Informative to victory in the Grade 3 Salvator Mile, one of seven winners he had last weekend. 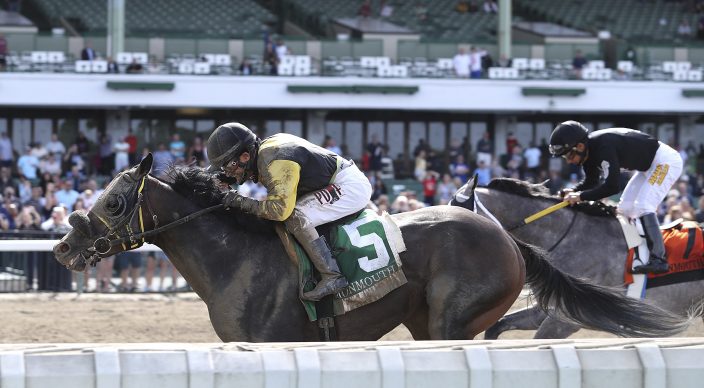 In this photo provided by Equi-Photo, 57-year-old jockey Jose Ferrer rides 79-1 longshot Informative (5) to victory in the Salvator Mile at Monmouth Park Racetrack in Oceanport, N.J., Tuesday, June 12, 2021. At right, is Traffic (7), Paco Lopez up, who finished second. (Bill DenverEqui-Photo via AP)

After the race he joked the horse couldn’t read the tote board.

A lot of his horses have been like that. Seven of his winners have paid $12 on a $2 win bet, and three have returned more than $30.

Ferrer has seen 32 of his 56 mounts hit the board. He sees no reason why he can't add a second Monmouth riding title to the one he took in 2018. That was six months after a horrible spill at Delaware Park that many feared would end his riding career.

Ferrer was born in Puerto Rico and credits his success to a tough physical regimen, adding he is in the best shape of his life. He's not into social media in his spare time.

“It’s a blessing to keep riding this long and at my age,” Ferrer said. “I like that some of the younger guys come to me for my knowledge. I am always there to help if I can. Older riders helped me when I was coming up. So I feel like I should share my knowledge and experience.”

Ferrer leads Nik Juarez by six wins in the jockey competition with 43 days left in the meet. The only major jockey missing from Monmouth this meet is Joe Bravo, who opted out because of New Jersey’s strict no crop rule.

Ferrer said he has adjusted to the new rule, adding it reminds him of 1980s when he used his hands a lot more than his stick.