Jadeveon Clowney burst out of his three-point stance, spun around a couple of tackling dummies and celebrated finishing first in a drill by thrusting his index finger in the air and letting out a loud yell.

By all accounts, he's happy, healthy and hungry with the Cleveland Browns.

And, for the first time in his pro career, Clowney has got a teammate who is his mirror image, a defensive lineman who shares many of his freakish skills — All-Pro Myles Garrett, a fellow No. 1 overall pick. 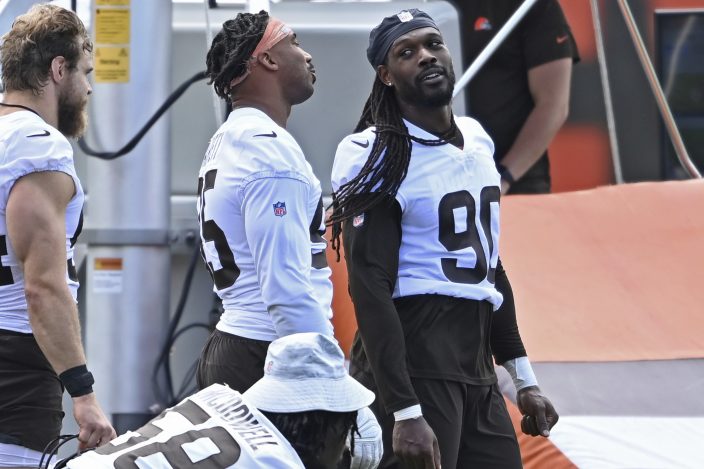 Cleveland has got a new terrifying tandem up front.

“My two tiny friends?” quarterback Baker Mayfield said when asked about the prospect of facing the Browns' brooding bookends. “I would not say it would be very fun to go up against them.”

Fun seemed to be the theme for Clowney, who stood out during Cleveland's three-day minicamp, which concluded Thursday with a high-spirited workout on the fields behind the team's training complex. 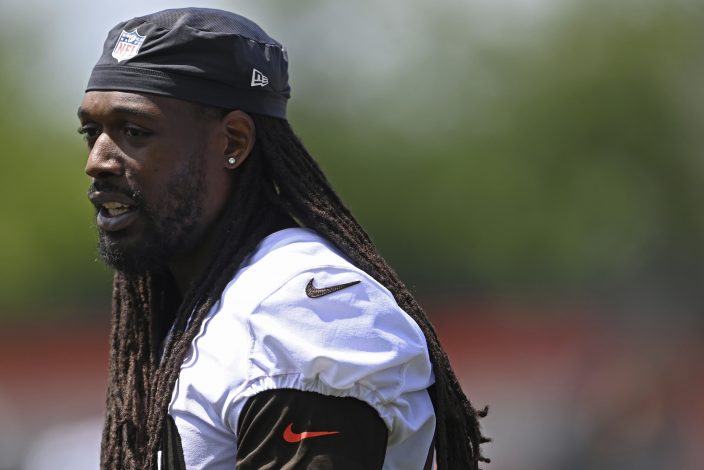 There were eyes and camera lenses trained on Clowney, who signed a one-year, $8 million contract as a free agent in April with the Browns, his third team in three years after stops in Seattle and Tennessee following a five-year stint in Houston.

This week was the first time Clowney got to work alongside Garrett, a 6-foot-5, 275-pound specimen he considers an athletic equal.

“It’s funny,” Clowney said following his first practice with Garrett. "I haven’t run into many guys like that in the National Football League yet. It took me eight years to get here to find another one like that, on defense, anyways.” 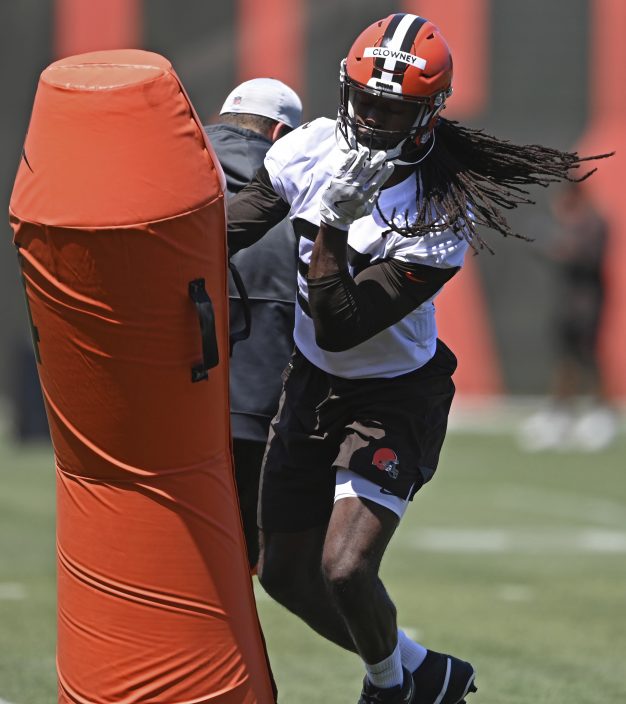 Clowney looks fully recovered after injuring his left knee — he played in just eight games for the Titans in 2020 — and undergoing surgery in December. He skipped the team's voluntary workouts to train on his own.

“I proved to myself I’m feeling good coming off the knee injury,” he said. “I’ve been training extremely hard this offseason, so I already kind of had a feel of where I was coming here. I wouldn’t have come if I wasn’t healthy.

“I felt great coming in. I feel great now. Hopefully I can continue it into this next phase and keeping being strong and faster and get ready for training camp.” 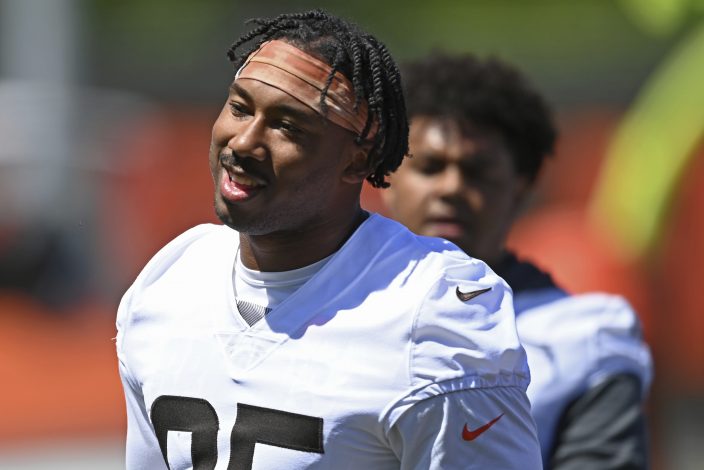 With Garrett and Clowney as the star attractions the past three days, there was a constant buzz around Cleveland's defensive line group, which has been overhauled with several new players, including Takk McKinley (free agency), Andrew Billings (back from COVID-19 opt-out) and rookie draft pick Tommy Togiai.

The head-to-head battles included some lively trash talking, and Clowney seemed to love every second of it.

"The thing about me, man, I like to have fun no matter what team I go to or where I go,” Clowney said. “I’m an excited guy. I know it’s a job, but I try to say it’s football first. I always enjoy playing football. It’s not really a job. 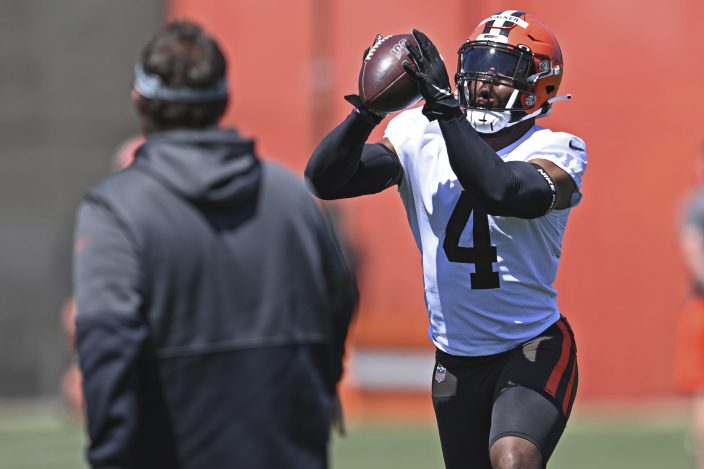 "We’ve got the best job in the world. Why not put a smile on your face when you’re out there running around and they pay you for this and I would play for free?”

The Browns believe Clowney is a perfect complementary piece for Garrett, who had 12 sacks last season but only 2 1/2 after he got COVID-19 and struggled with his breathing over the final five games.

With Clowney and Garrett coming off the edge, offenses will have to devise blocking schemes to slow them down to keep their quarterbacks safe. It's also likely that Browns defensive coordinator Joe Woods will line up his two stars on the same side, forcing teams to make some tough choices.

Cleveland Browns defensive back Greg Newsome II celebrates with teammates after an interception in 7 on 7 drills during an NFL football practice at the team's training facility, Thursday, June 17, 2021, in Berea, Ohio. (AP PhotoDavid Dermer)

Clowney, who didn't record a sack with the Titans and has just three in the past two seasons, doesn't mind lining up at tackle, but he knows what he does best.

“I thrive in moving around, but I thrive in going forward,” he said. “You get that?”

NOTES: WR Odell Beckham Jr. did only conditioning work Thursday and the team said that was part of his recovery plan as he returns from knee surgery in November. Beckham looked terrific earlier this week and appears ahead of schedule. ... Woods dismissed the notion he's on the “hot seat” after Cleveland's defense was overhauled by free agent signings and the draft. “It's the NFL, I have been in the hot seat for 30 years. Because every year you get contracts but you keep your job based on how your player, your position or your unit performs. ... This is a show-me game, that is the NFL and I have to produce.” ... New Browns LB Anthony Walker Jr. has changed his jersey number from 54 to 4. 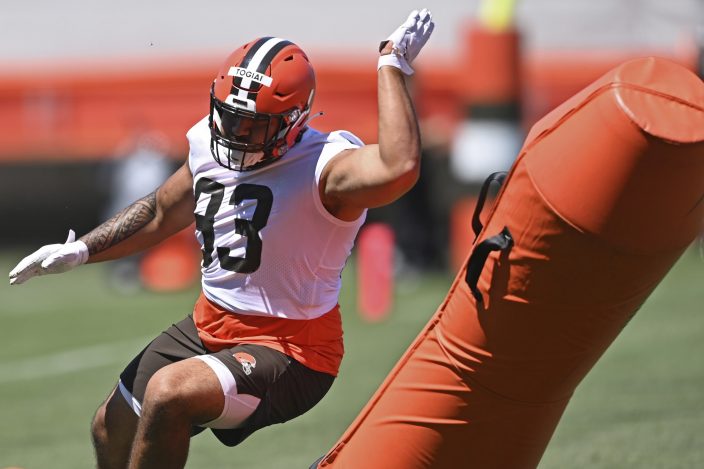