Much of the American West has been blasted with sweltering heat this week as a high pressure dome combines with the worst drought in modern history to launch temperatures into the triple digits, toppling records even before the official start of summer.

Record daily highs were seen this week in parts of Arizona, California, New Mexico, Montana, Wyoming and Utah. Phoenix, which is baking in some of the U.S. West’s hottest weather, was forecast to hit 117 degrees (47 Celsius) Thursday and 116 degrees Friday and Saturday. 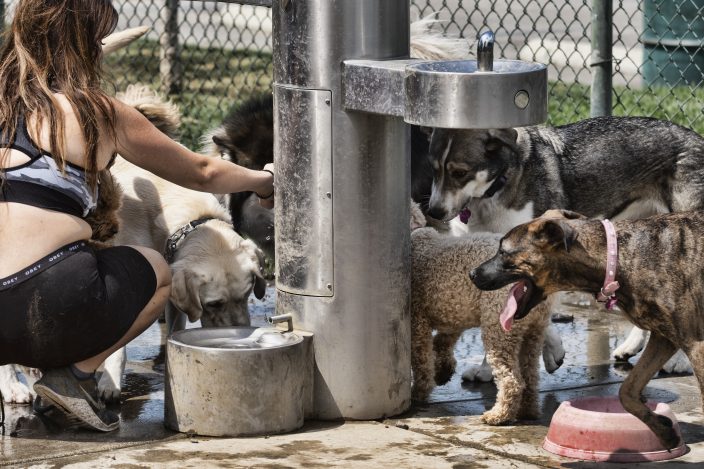 A dog walker gives water from a fountain to her pack of dogs at the Sepulveda Basin Dog park in the Van Nuys section of Los Angeles on Thursday, June 17, 2021. Temperatures in the 80s and 90s were expected up and down the state, with triple-digit highs forecast in deserts, some mountains, non-coastal valley and interior areas. (AP PhotoRichard Vogel)

WHY IS THE AMERICAN WEST SO HOT THIS WEEK?

The heat comes from a high pressure system over the West, a buckle in the jet stream winds that move across the U.S. and vast swaths of soil sucked dry by a historic drought, said Marvin Percha, a senior meteorologist for the agency in Phoenix.

He and other scientists say the heat wave is unusual because it arrived earlier and is staying longer than in most years.

A worker fixes a street lamp in the Van Nuys section of Los Angeles on Thursday, June 17, 2021. California's power grid operator called for voluntary energy conservation Thursday as much of the state sweltered under a heat wave that has baked the U.S. West. (AP PhotoRichard Vogel)

But with such an early heat wave this year, “this could be the tip of the iceberg,” Williams said.

WHAT ROLES DO DROUGHT AND CLIMATE CHANGE PLAY? 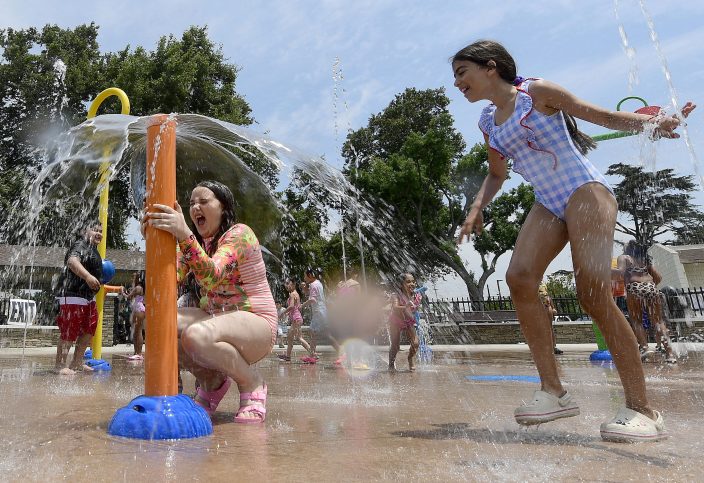 Alanna Clarke, 11, reacts as she cools off under a mushroom fountain on the splash pad at Monte Vista Park in Chino, Calif., on Wednesday, June 16, 2021, as temperatures reached into the triple digits. The splash pad at the park is open every day from 10a.m. to 6 p.m. (Will LesterThe Orange County RegisterSCNG via AP)

A two-decade-long dry spell that some scientists refer to as a “megadrought” has sucked the moisture out of the soil through much of the Western United States. Researchers said in a study published last year in the journal Science that man-made climate change tied to the emission of greenhouse gases can be blamed for about half of the historic drought.

Scientists studying the dry period that began in 2000 looked at a nine-state area from Oregon and Wyoming down through California and New Mexico and found only one other that was slightly larger. That drought started in 1575, a decade after St. Augustine, Florida, was founded and before the Pilgrims landed on Plymouth Rock in 1620.

The hot weather can be tied to the drought drying out the landscape. Normally, some of the sun’s heat evaporates moisture in the soil, but scientists say the Western soil is so dry that instead that energy makes the air even warmer. 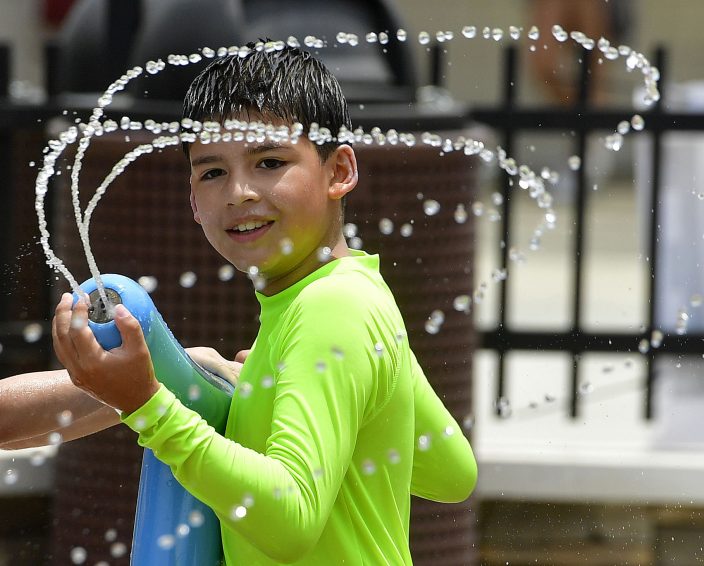 Fred Sereno, 9, aims a water cannon at others on the splash pad at Monte Vista Park in Chino, Calif., Wednesday, June 16, 2021, as temperatures reached into the triple digits. The splash pad at the park is open every day from 10 a.m. to 6 p.m. (Will LesterThe Orange County RegisterSCNG via AP)

“When the soil is wet, heat waves aren't so bad," said Williams, who has calculated that soil in the western half of the nation is the driest it has been since 1895. “But if it's dry, we are under extreme risk.”

HOW DO RECENT WILDFIRES FIGURE INTO THIS?

Scientists say the wildfires that have erupted in recent days have been fed by the excessive heat across the region. Climate change contributes to the drought conditions and makes trees and shrubs more likely to catch fire. 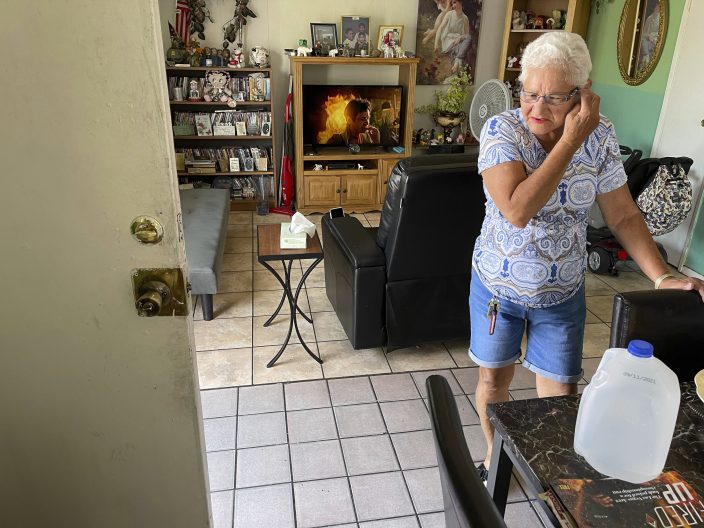 Carmen Millan, 82, uses a fan with open windows and door to keep cool at her apartment on East Desert Inn Road and South Athens Street in Las Vegas Wednesday, June 16, 2021. Millan keeps doesn't run her air conditioning during the day to save money on her electricity bill. (K.M. CannonLas Vegas Review-Journal via AP)

At least 14 new wildfires broke out this week in Montana and Wyoming as the record heat sparked an early start to the fire season. Firefighters also battled blazes in Arizona and New Mexico.

“From a fire potential standpoint, what is capable this year, it is certainly much more severe than we’ve seen in the past," U.S. Department of Agriculture fire meteorologist Gina Palma said in a climate briefing Thursday.

Palma said the drought-related fire risks were especially pronounced in higher elevations across much of the U.S. West, from the Rocky Mountains down into the Southwest and parts of California. 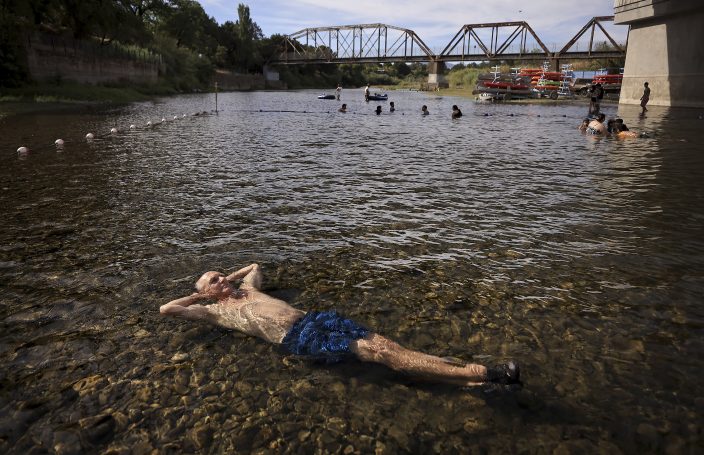 Gerry Huddleston of Santa Rosa, Calf. cools off in the very shallow water of the Russian River, Wednesday, June 16, 2021 at the Veterans Memorial Beach in Healdsburg, Calif. An unusually early and long-lasting heat wave brought more triple-digit temperatures Wednesday to a large swath of the U.S. West, raising concerns that such extreme weather could become the new normal amid a decades-long drought. (Kent PorterThe Press Democrat via AP)

“You will be seeing very extreme fire behavior, certainly conditions that we would not normally see in June,” she said.

IS THIS THE NEW NORMAL?

A growing number of scientific studies are concluding that heat waves in some cases can be directly attributed to climate change, said Kristie L. Ebi, a professor at the Center for Health and the Global Environment at the University of Washington.

That means the U.S. West and the rest of the world can expect more extreme heat waves in the future unless officials move to cut down on greenhouse gas emissions, Ebi and other scientists say.

A study last month estimated the percent and number of heat deaths each year that can be attributed to human-caused climate change. It included about 200 U.S. cities and found more than 1,100 deaths a year from climate change-caused heat, representing about 35% of all heat deaths in the country.

On average each year, Phoenix has 23 climate-triggered heat deaths, Los Angeles has 21 and Tucson has 13, the study said.