The 21-year-old Richardson enters as the favorite in the 100 meters at U.S. Olympic track and field trials this week, where a win would put her on a list of American champions that includes world-record holder Florence Griffith Joyner.

“Flo-Jo came to the track and knew she was going to dominate,” said Richardson, whose event starts Friday with the final Saturday. “The way she did that was graceful. I always liked that. If the amazing Flo-Jo had long nails, there was no excuse why I couldn’t have long nails.” 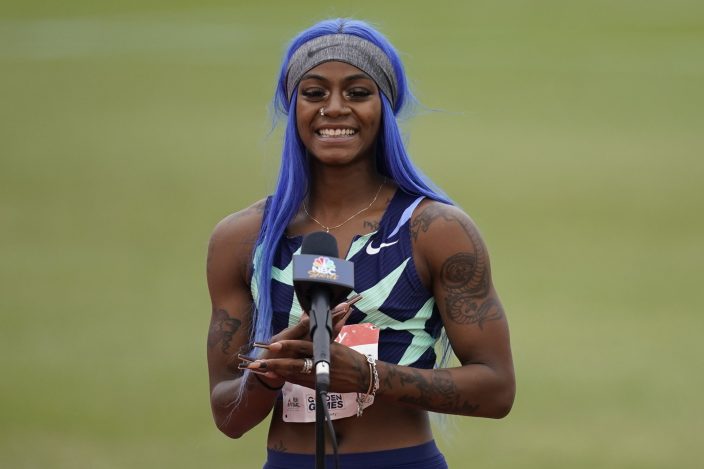 FILE - Sha'Carri Richardson is interviewed after winning her heat of the the women's 100-meter dash prelim during the USATF Golden Games at Mt. San Antonio College in Walnut, Calif., in this Sunday, May 9, 2021, file photo. The U.S. Olympic track trials begin Friday night, June 18, at remodeled Hayward Field. Richardson will be trying to make the team.(AP PhotoAshley Landis, File)

Richardson's race may not be a nail-biter. Others may. This first weekend also features the men’s 100 meters, where Noah Lyles — one of the biggest names in the leadup to the Tokyo Games — kicks off his bid on a potential sprint double. There will be world-record attempts (keep an eye on the men’s shot put) and 400-meter sprinter Allyson Felix trying to make her fifth Olympic team.

The show stopper could be Richardson. She's also big on hair color — a la two-time Olympic champion Shelly-Ann Fraser-Pryce of Jamaica — and names the styles of her hair. Red is “Sasha” and blonde is “LaNay” (Richardson's middle name). 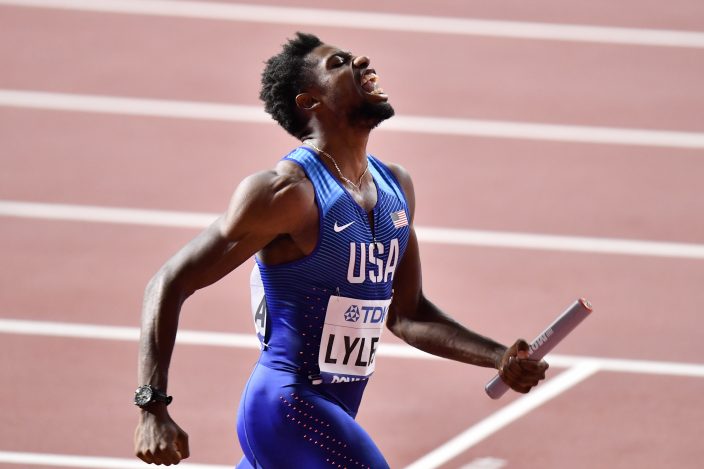 FILE - Noah Lyles of the United States reacts after winning the men's 4x100 meter relay final during the World Athletics Championships in Doha, Qatar, in this Saturday, Oct. 5, 2019, file photo. The U.S. Olympic track trials begin Friday night, June 18, 2021, at remodeled Hayward Field. Some of the biggest events over the first week figure to be the men's 100 meters where Noah Lyles -- one of the faces of the Tokyo Games -- kicks off his bid on a potential 100-200 double. (AP PhotoMartin Meissner, File)

Her plans for trials: top secret.

As for her nails, well, those are actually inspired by her grandmother. It was only later that she discovered Griffith Joyner’s nails in a fortuitous accident.

She was learning all about the history of Wilma Rudolph, the 100- and 200-meter Olympic champion in 1960, when she saw a picture of Griffith Joyner. 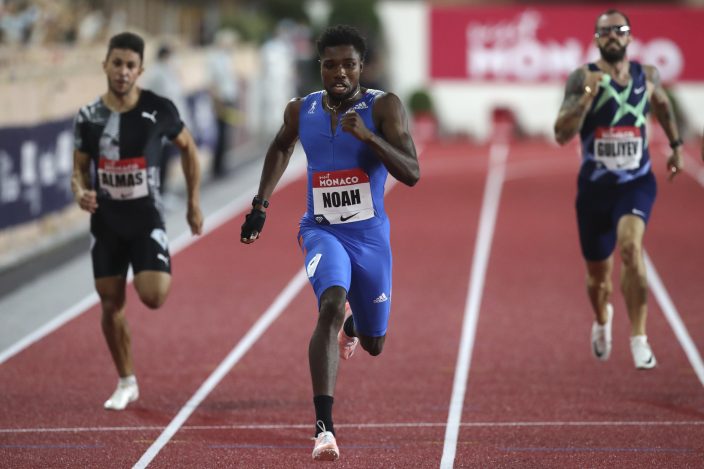 FILE - United States' Noah Lyles runs to win the the men's 1500 meter final during the Diamond League athletics meeting in Monaco, in this Friday, Aug. 14, 2020, file photo. The U.S. Olympic track trials begin Friday night, June 18, 2021, at remodeled Hayward Field. Some of the biggest events over the first week figure to be the men's 100 meters where Noah Lyles -- one of the faces of the Tokyo Games -- kicks off his bid on a potential 100-200 double. (AP PhotoDaniel Cole, Pool, File)

Richardson counts both as inspirations.

“Those two were the mix of the athlete I wanted to be,” she said. “An athlete that shows I know where I came from and been through things, but I’m not going to allow that to define me, and to always present myself in a way that is dominant — but that is also appealing."

Richardson's times have been eye-opening — 10.77 or faster on three occasions this season. The only one who's been speedier this season is Fraser-Pryce.

“That (time) is in my mind. But it’s in the back of my mind,” said Richardson, who will be running with a heavy heart after recently losing her mother. “Right now, my mindset is to perfect the craft. I know the times will follow."

Lyles is the big name and one of the featured athletes in NBC promos leading up to the Olympics. His bid for a 100-200 double starts Saturday.

It won't be an easy endeavor in the 100 with Trayvon Bromell, Marvin Bracy, Isiah Young and Ronnie Baker all running fast. There's also Fred Kerley, who dropped the 400 to concentrate on the 100 and 200. Don't forget about Justin Gatlin, either. The 39-year-old won the 100-meter Olympic title in 2004. Gatlin also earned silver in Rio in the 100 and bronze at the 2012 London Games.

Crouser broke the world indoor mark with his performance at an American Track League meet in January when his shot put traveled 22.82 meters (74 feet, 10½ inches).

The 35-year-old Felix will try to make the team in the 400. She's already earned six Olympic gold medals and three of the silver variety. The mother of a young daughter, Felix has found her voice away from the track on issues such as lobbying for more protections in contracts for female athletes who give birth.

The final is Sunday.

Keni Harrison enters the 100 hurdles as the favorite — and highly motivated. She finished a disappointing sixth at the 2016 trials, only to set a new world record a few weeks later.

The trio that made the 100 hurdles squad for Rio — Brianna Rollins, Nia Ali and Kristi Castlin — swept the Olympic medals. Rollins — now Brianna McNeal — was recently banned five years in a doping case but the Court of Arbitration for Sport made an interim decision to freeze her ban so she can run trials (she's listed among the entries). The full appeal will be heard before the Tokyo Olympics.

Ali won't compete at trials after recently having a baby. Castlin is listed in the field along with Anna Cockrell, the University of Southern California senior who won the event at the NCAA championships held in Eugene a week ago.

There's also Grant Fisher, the 24-year-old who was a multi-time All-American at Stanford. Both Lomong and Fisher are members of the Bowerman Track Club.