Substitute Kevin De Bruyne set up one goal and scored the winner himself to give Belgium a 2-1 victory over Denmark in a European Championship game marked by an emotional tribute to Christian Eriksen in the first half.

De Bruyne came on after halftime for his first appearance since sustaining a facial fracture in the Champions League final and squared the ball for Thorgan Hazard to equalize in the 55th minute. He then scored in the 71st with a low shot from outside the area.

It was Denmark’s first game since Eriksen’s collapse, and the hosts started at a furious pace at a raucous Parken Stadium. Yussuf Poulsen scored with a low shot inside the far post in only the second minute.

Denmark supporters display banners for Christian Eriksen, the Danish player who collapsed during the match against Finland last Saturday, June 12, during the Euro 2020 soccer championship group B match between Denmark and Belgium, at the Parken stadium in Copenhagen, Thursday, June 17, 2021. (Wolfgang Rattay, Pool via AP)

Players from both teams then halted play after 10 minutes as the 25,000 fans rose for a minute of thunderous applause in tribute to Eriksen, who wears the No. 10 shirt for Denmark’s national team.

The players joined the applause as well, as did referee Bjorn Kuipers.

Eriksen remains in a nearby hospital after suffering cardiac arrest in the team’s opening game against Finland. 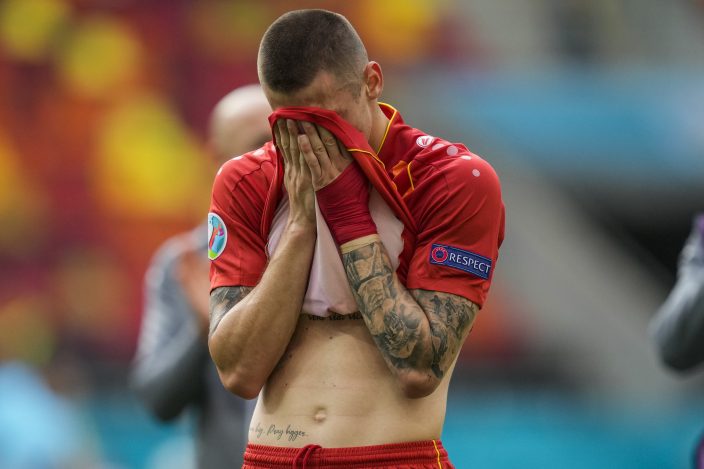 The victory give Belgium a spot in the round of 16. Denmark can still advance with a win over Russia on Monday if the Belgians beat Finland.

Memphis Depay and Denzel Dumfries scored a goal in each half as the Netherlands comfortably beat Austria 2-0 to advance to the round of 16. 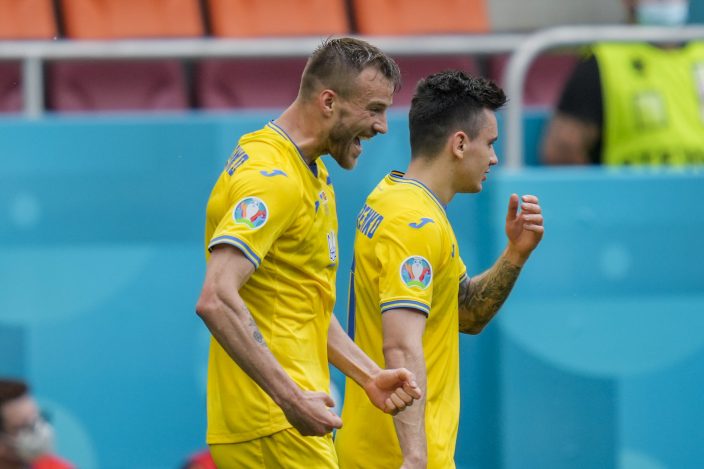 Depay sent a penalty kick low into the corner in the 11th minute for his 27th goal in 66 international matches. Dumfries then scored his second goal of the tournament — following his late winner against Ukraine — in the 67th after an unselfish pass from PSV Eindhoven teammate Donyell Malen.

The Netherlands is playing at a major international soccer tournament for the first time in seven years and qualified for the knockout stage with a game to spare.

Austria, playing without banned forward Marko Arnautović at the Johan Cruyff Arena, rarely threatened to equalize against a well-ordered Dutch defense led by Matthijs De Ligt on his return from a groin injury.

Arnautović was handed a one-match ban by UEFA for insulting a North Macedonian player in the teams’ Euro 2020 opener. The incident soured Austria’s first victory at a major tournament in 31 years and its first ever at the European Championship.

Andriy Yarmolenko and Roman Yaremchuk both scored to give Ukraine a 2-1 victory over North Macedonia.

The same two players also scored in the team’s opening match at Euro 2020 on Sunday, but that ended up being a 3-2 loss to the Netherlands.

Yarmolenko netted from close range in 29th minute after Oleksandr Karavaev’s flick from a corner. He then released Yaremchuk on the right flank in the 34th to double the lead with a low shot past onrushing goalkeeper Stole Dimitrievski.

The goals were separated by five minutes. Against the Dutch, they scored only four minutes apart.

Ezgjan Alioski got the only goal for North Macedonia in the 57th minute when he scored on a rebound after goalkeeper Georgiy Bushchan blocked his penalty shot.

North Macedonia was eliminated from the tournament after the Dutch win over Austria.