A visual inspection has found problems in about one-third of the elevated Mexico City subway line where one span collapsed on May 3, killing 26 people.

The College of Engineers study of the city’s Number 12 line covered the 7.5 miles (12 kilometers) of elevated track, but not the section that collapsed.

A previous report released Wednesday on the collapsed section found construction defects from when the line was built in 2010-2012, but those defects were hidden and would probably not be seen in a visual check. 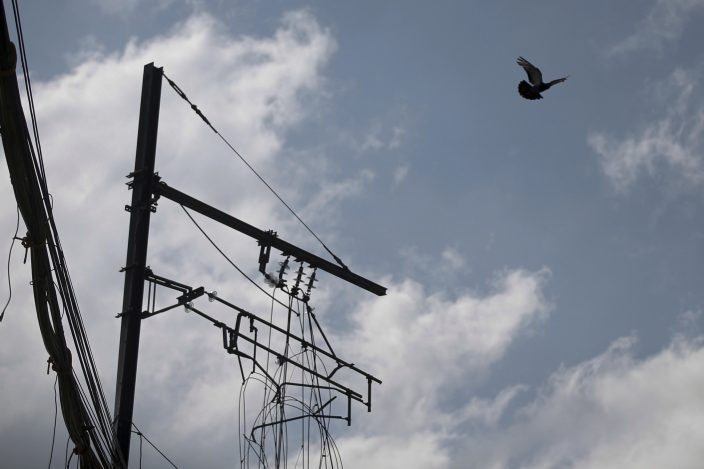 Tangled cables hang over the collapsed elevated section of subway Line 12, in Mexico City, Wednesday, June 16, 2021. A preliminary report released Wednesday by the Norwegian certification firm DNV, into the collapse of the Mexico City elevated subway line that killed 26 people, placed much of the blame on poor welds in studs that joined steel support beams to a concrete layer supporting the track bed. (AP PhotoFernando Llano)

What engineers did see on the rest of the line in the study released Thursday were cracks in columns and support beams, skewed braces, rain water leaks and metal beams that may not meet standards because they were welded in the middle or weren’t resting properly on rubber shock absorbers.

The shock absorbers are needed in earthquake-prone Mexico City, and the beams must have space to move without hitting concrete supports, which was also found lacking in some places.

It said defects had to be studied further, perhaps by testing samples of the concrete or studying the welding of the steel. It did not classify the defects as extremely serious, but recommended they be studied before the line is reopened. FILE - In this May 4, 2021 file photo, subway cars dangle at an angle from a collapsed elevated section of the metro in Mexico City, the day after the collapse. A preliminary report on June 16, 2021, by experts into the collapse that killed 26 people placed much of the blame on poor welds in studs that joined steel support beams to a concrete layer supporting the trackbed. (AP PhotoFernando Llano, File)

The report said the other two-thirds of the line appeared to have just normal wear and tear.

What was surprising is that, while some of the problems could have resulted from normal use or earthquakes, many of them were clearly visible and appeared to be errors dating from the initial construction of the problem-plagued line.

Some of the braces — pieces of open-framed metal meant to keep the track's two main steel girders evenly spaced — had been installed crooked, or without the necessary cross-bracing bars. Some of the girders had been welded differently than others.

One of the elevated track's columns appeared to have been built just inches from a column supporting a separate roadway that passes over it. Because the concrete columns sway in earthquakes, they could bang into one another.

The results add to the woes of the Number 12 line, which has been closed since the accident occurred.

The report Wednesday placed much of the blame for the collapse on poor welds in studs that joined steel support beams to a concrete layer supporting the track bed. The report also said there were apparently not enough studs, and the concrete poured over them may have been defective. The welds between stretches of steel beams also appear to have been badly done.

Because concrete was poured over the studs, they would not have been seen in Thursday's inspection.

The problems would fit with reports that the project was rushed to completion so the Number 12 subway line could be inaugurated by current Foreign Relations Secretary Marcelo Ebrard before he left office Mexico City's mayor in 2012.

The $1.3 billion Number 12 Line, the newest section of a vast subway system opened in 1969, was ill-fated from the start. The so-called Gold Line cost half again as much as projected, suffered repeated construction delays and was hit with allegations of design flaws, corruption and conflicts of interest.

The scandal over forced closure of the costly new line in 2014 — just 17 months after it was inaugurated — essentially forced Ebrard into political exile. He was rescued by his patron, new President Andrés Manuel López Obrador, who had helped make him mayor in 2006 and resuscitated him by naming him foreign relations secretary in 2018.

Despite the subway scandal, Ebrard was put in charge of Mexico’s efforts to obtain coronavirus vaccines and was once considered a top contender to succeed López Obrador in 2024.

That was until the May 3 accident saw a span of the elevated line buckle to the ground, dragging down two subway cars.

Experts said the line suffered design problems from the start. Unusually sharp curves in the route exacerbated problems with the wheels-on-steel track design.

Subway cars chattered and bumped, and the rails began to take on a wavy pattern. Drivers had to slow trains to as little as 3 mph (5 kph) on some stretches. In 2014, the Gold Line had to be shut down for months for the tracks to be replaced or ground into shape.

Mexico City’s subway, which serves 4.6 million riders every day, has never had the one thing it needs most: money. With ticket prices stuck at 25 cents per ride, one of the lowest rates in the world, the system has never come close to paying its own costs, and depends on massive government subsidies.

Survivor of subway crash reflects on decision to change cars