Charlie Morton didn't allow a hit until the seventh inning and took a shutout into the eighth, lifting the Atlanta Braves over the St. Louis Cardinals 4-0 on Thursday night.

Morton gave up his first hit when Paul Goldschmidt lined a single to left-center with one out, but the right-hander followed by getting Nolan Arenado to pop up and struck out Tyler O’Neill. He allowed singles to Matt Carpenter and pinch-hitter José Rondón in the eighth and was pulled with two outs.

Atlanta led 1-0 in the fifth on Guillermo Heredia’s third homer. Ozzie Albies had an RBI triple in the sixth, and Abraham Almonte followed with an RBI double to make it 3-0. 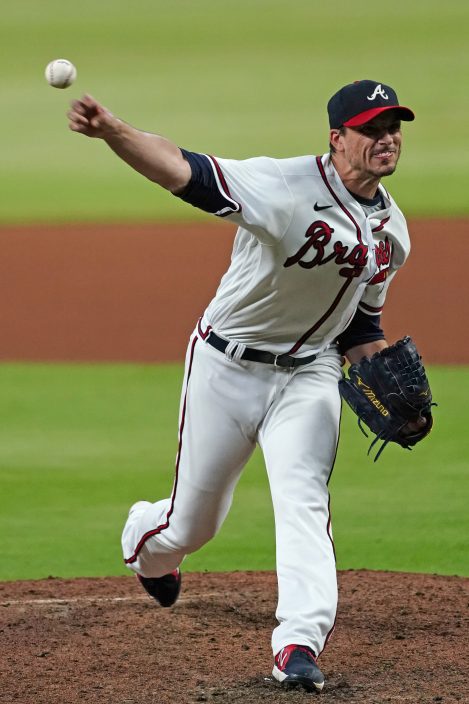 Atlanta Braves starting pitcher Charlie Morton works against the St. Louis Cardinals during the seventh inning of a baseball game Thursday, June 17, 2021, in Atlanta. Morton to a no-hitter into the seventh. (AP PhotoJohn Bazemore)

Ronald Acuña Jr.’s sacrifice fly in the seventh pushed it to 4-0.

Luke Jackson struck out Tommy Edman to strand the runners after replacing Morton (6-3), who allowed three hits and no walks with seven strikeouts.

Morton and Cardinals starter John Gant didn’t allow a hit early on, but they weren’t perfect. Gant gave up a walk to Almonte to begin the second. Morton allowed two baserunners when he hit Matt Carpenter with a pitch in the third and did the same to Dylan Carlson in the fourth. 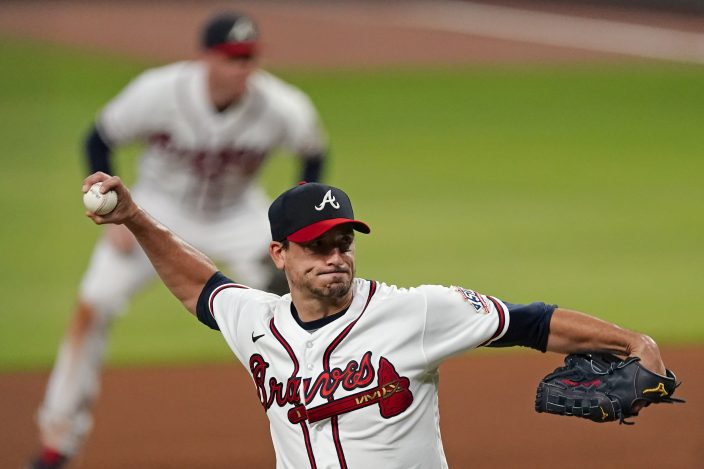 Acuña singled to open the fourth, and Freddie Freeman followed with a single, but the inning ended when Austin Riley lined out to third.

Morton, who entered 2-12 with a 5.68 ERA in 18 career starts against St. Louis, avoided his tendency this season to allow a big inning. With his fastball topping out at 96 mph, the right-hander mixed in his curveball and cutter to strong effect. He threw 75 of 112 pitches for strikes and faced 27 batters.

Morton benefited from a strong play when Freeman jumped at first base to stab Edman’s liner to end the sixth. 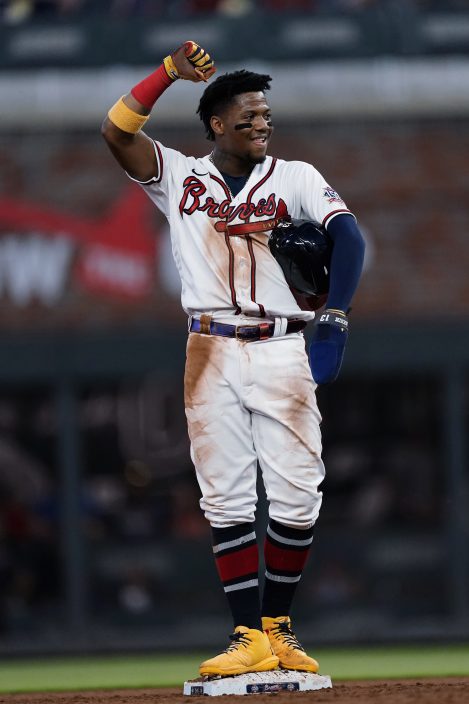 Atlanta Braves' Ronald Acuna Jr. reacts after a video review confirmed he was safe with a steal of second base in the sixth inning of the team's baseball game against the St. Louis Cardinals on Thursday, June 17, 2021, in Atlanta. (AP PhotoJohn Bazemore)

Acuña walked to begin the sixth, stole second, advanced on Freeman’s groundout and scored on Albies’ triple to left-center to make it 2-0. That chased Gant, who was replaced by Daniel Ponce de Leon. Almonte followed with his RBI double.

The three-time defending NL East champion Braves, who began the night 7 1/2 games back in the division, had dropped six of seven and were five games under .500 for the first time since the end of the 2017 season. 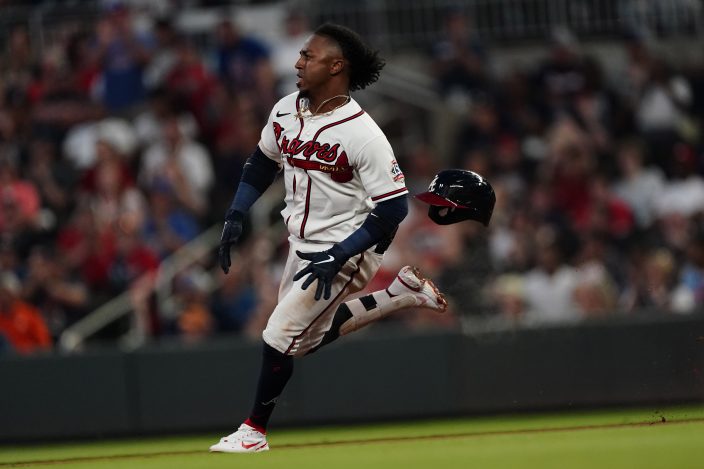 Atlanta Braves' Ozzie Albies runs to third base wafter hitting an RBI-triple in the sixth inning of a baseball game against the St. Louis Cardinals, Thursday, June 17, 2021, in Atlanta. (AP PhotoJohn Bazemore)

The Cardinals entered three games back in the NL Central but had won three straight after losing nine of 10.

Cardinals: Edman was back in the lineup and went 0 for 4 after missing the last two games with torso tightness. ... 2B Edmundo Sosa was not available after getting hit by a pitch in the right hand in Wednesday’s win over Miami. “He’s got range of motion to some degree,” manager Mike Shildt said. “He hasn’t been able to get out and test it from a baseball activities standpoint and so we’re not sure about his availability tonight. It was scary.” 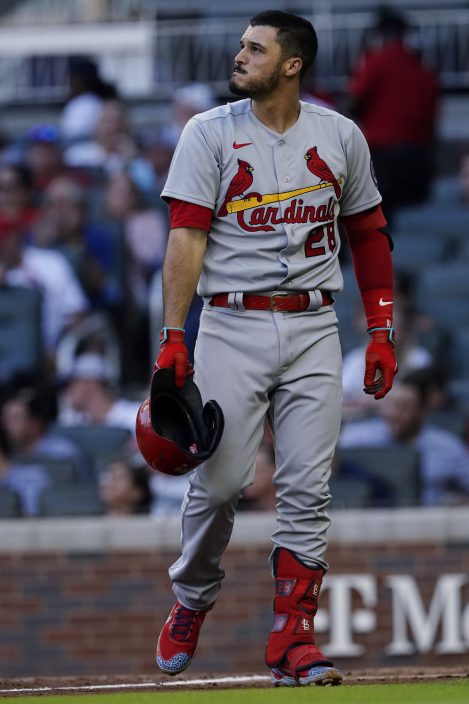 St. Louis Cardinals' Nolan Arenado walks back to the dugout after striking out to end the Cardinals' half of the fourth inning of a baseball game against the Atlanta Braves on Thursday, June 17, 2021, in Atlanta. (AP PhotoJohn Bazemore)

Braves: RHP Mike Soroka is still in a walking boot following exploratory surgery last month and has no immediate timetable for when he can resume baseball activities. Soroka said the internal sutures didn’t dissolve as they were supposed to from the original Achilles tendon surgery last August. The tendon is fully repaired. “They were basically floating around in there creating a bunch of inflammatory tissue response, and that’s what I was feeling,” Soroka said. “(The surgeon) got in there and took them out. They were sitting right on top.”

The Cardinals played their first game at Truist Park since winning 13-1 in Game 5 the 2019 NLDS. 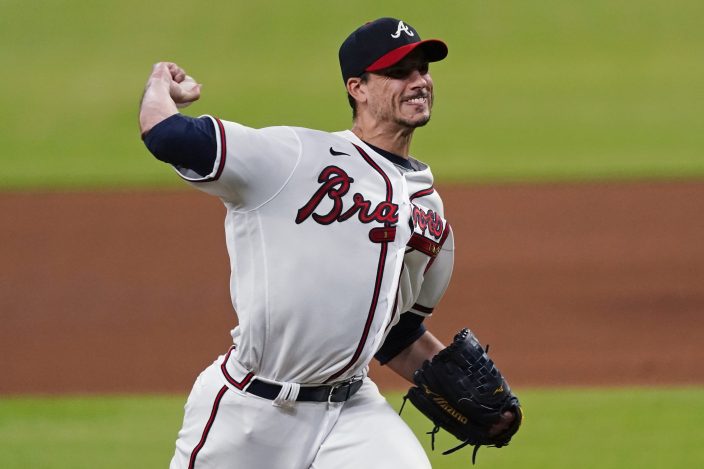 Acuña went 1 for 2 with one walk to reach safely in his 25th consecutive game, the longest active on-base streak in the majors. His run began May 18 and he began the night with a .411 on-base percentage during that span. 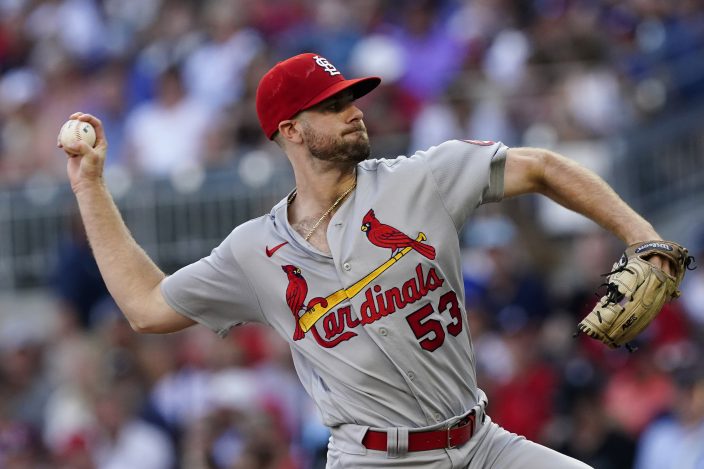 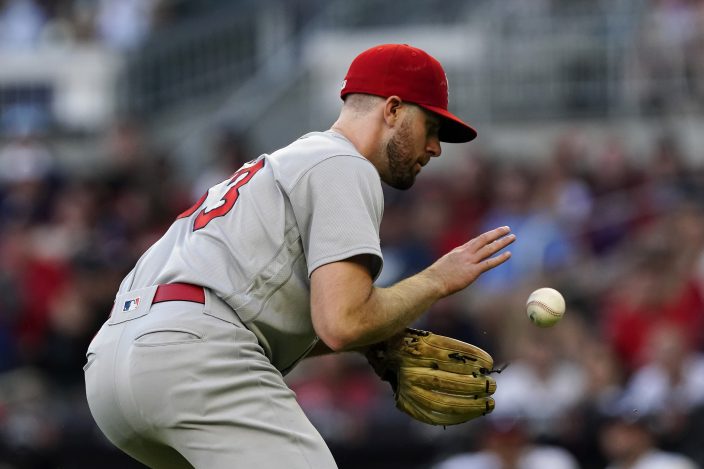 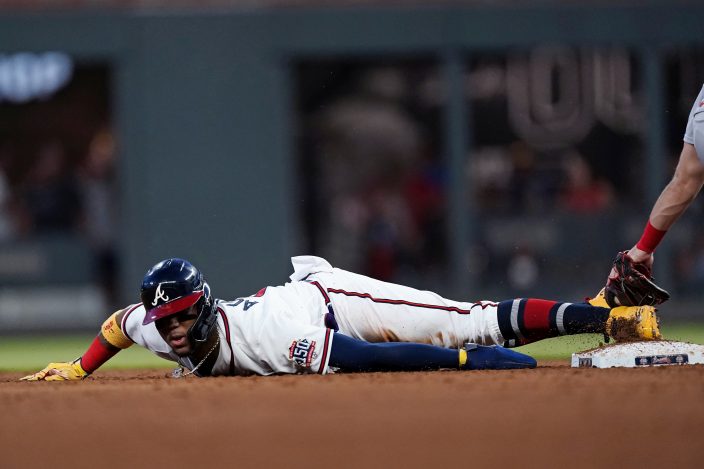 Atlanta Braves' Ronald Acuna Jr. steals second base in the sixth inning of the team's baseball game against the St. Louis Cardinals on Thursday, June 17, 2021, in Atlanta. (AP PhotoJohn Bazemore)