Shed Long Jr. hit a tying double in the bottom of the ninth inning and pinch-hitter Kyle Seager singled home the winning run to rally the Seattle Mariners past the Tampa Bay Rays 6-5 on Thursday night.

Seattle lost starter Justin Dunn to a sore right shoulder after two innings, but came from behind with the help of a two-run homer by Ty France and a solo shot from Luis Torrens.

Dylan Moore drew a four-pitch walk from reliever Pete Fairbanks (1-2) to start the ninth. Jake Bauers singled and Long tied it 5-all with his double. Seager batted for Taylor Trammell and singled through the right side of a drawn-in infield to score Bauers. 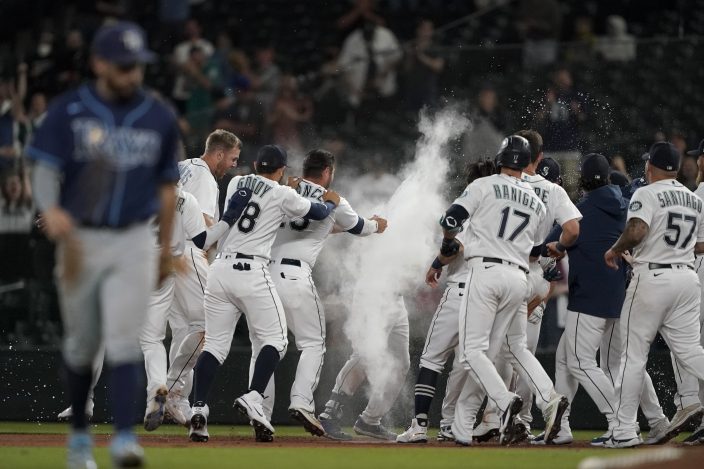 Seattle Mariners' Kyle Seager, center, is covered in powder by teammates after after he drove in the winning run with a single in the ninth inning of the team's baseball game against the Tampa Bay Rays, Thursday, June 17, 2021, in Seattle. Rays' Brandon Lowe, foreground left, heads off the field. The Mariners won 6-5. AP PhotoTed S. Warren)

Hector Santiago (1-1) struck out three in a hitless inning for the win.

Seattle has won four of five. The Rays are 24-8 in their last 32 games, with the eight losses coming by a total of 12 runs.

Randy Arozarena hit his 10th home run off Mariners reliever JT Chargois after Ji-Man Choi’s leadoff single in the fourth. Brett Phillips drew a walk, stole second and scored on Brandon Lowe’s single to make it 3-1 in the fifth. 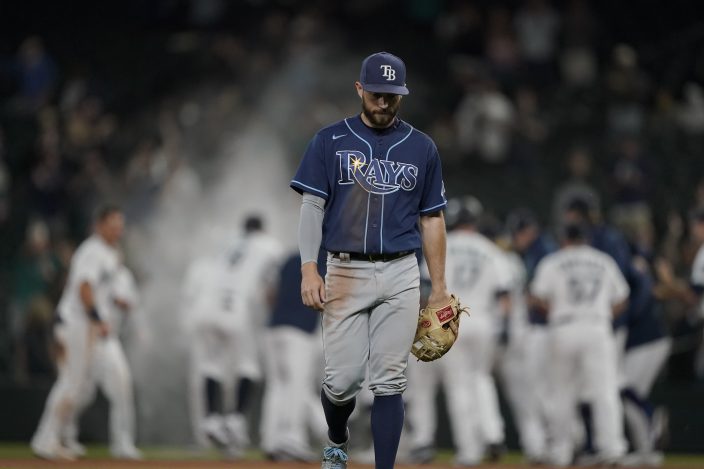 Tampa Bay Rays second baseman Brandon Lowe walks off the field as the Seattle Mariners celebrate after Kyle Seager drove in the winning run with a single in the ninth inning of a baseball game Thursday, June 17, 2021, in Seattle. The Mariners won 6-5. (AP PhotoTed S. Warren)

Joey Wendle and Kevin Kiermaier added RBI singles in the sixth to help build a 5-2 lead.

Rays: RHP Tyler Glasnow (right elbow strain) has been moved to the 60-day injured list and left the team following Wednesday’s game at the Chicago White Sox to see a specialist in Dallas on Friday. Glasnow blamed the injury on the coming crackdown on illegal foreign substances, forcing him to grip the ball differently than he normally would. 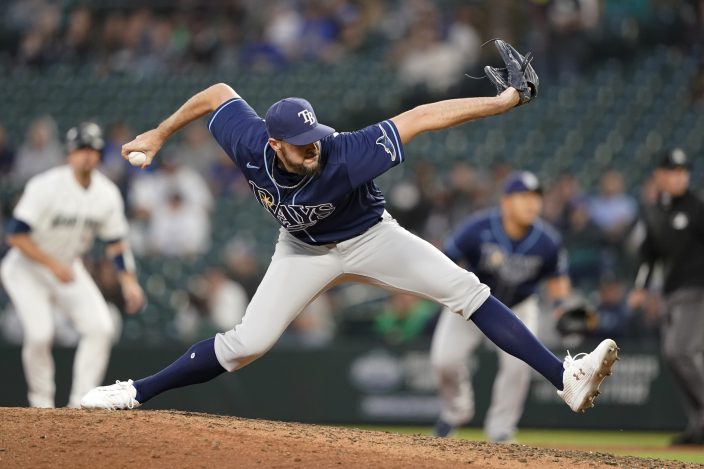 Rays: RHP Michael Wacha (1-1, 4.54 ERA) has not pitched more than three innings since returning from the injured list on May 23. 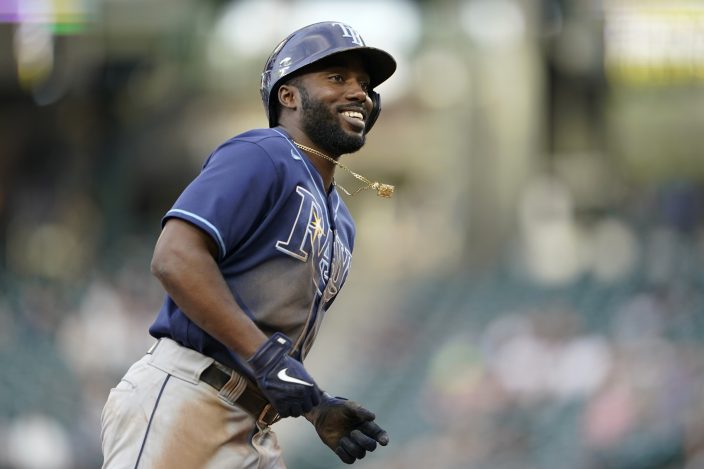 Tampa Bay Rays' Randy Arozarena smiles as he runs the bases after hitting a two-run home run during the fourth inning of the team's baseball game against the Seattle Mariners on Thursday, June 17, 2021, in Seattle. (AP PhotoTed S. Warren) 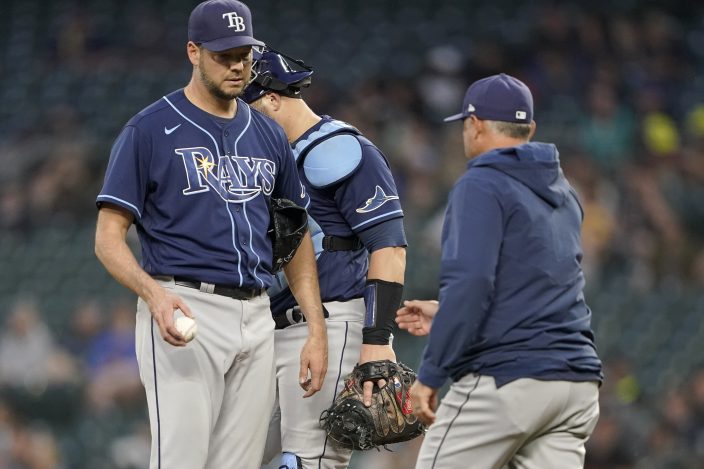 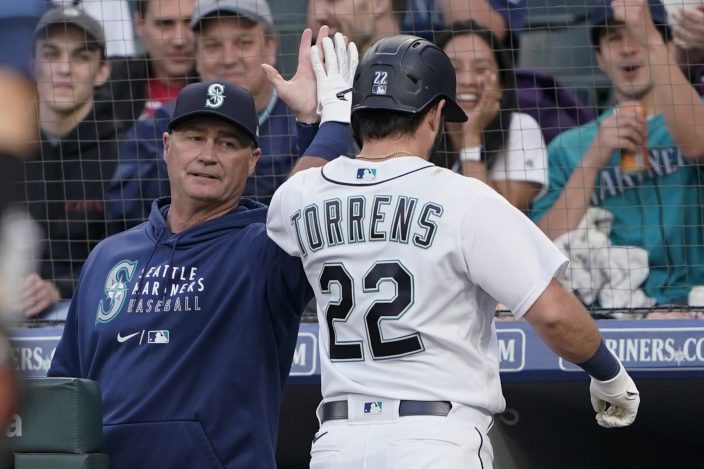 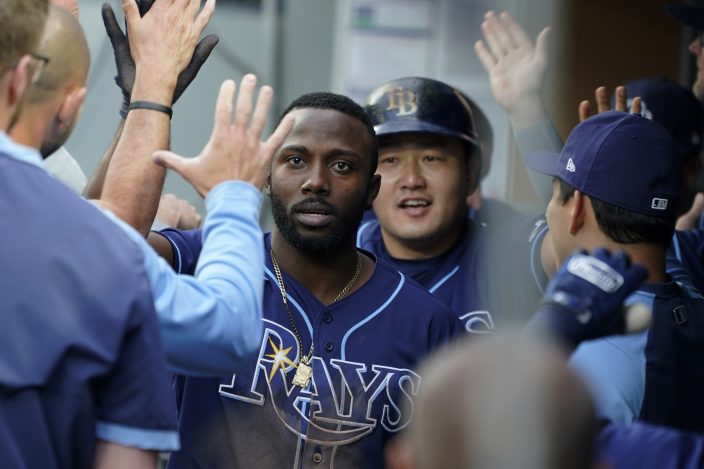 Tampa Bay Rays' Randy Arozarena, center left, is greeted in the dugout after he hit a two-run home run that also scored Ji-Man Choi, center right, during the fourth inning of a baseball game against the Seattle Mariners, Thursday, June 17, 2021, in Seattle. (AP PhotoTed S. Warren)