The U.N. General Assembly is expected to approve a resolution calling on Myanmar’s junta to restore the country’s democratic transition and for all countries “to prevent the flow of arms into Myanmar,” diplomats said.

The draft resolution also condemns deadly violence by security forces and calls on the junta to unconditionally release the ousted civilian leader Aung San Suu Kyi, President Win Myint “and all those who have been arbitrarily detained, charged or arrested."

The 193-member assembly is scheduled to consider the resolution, which has more than 50 co-sponsors, on Friday afternoon and its sponsors are hoping it will be approved by consensus to send a strong message to the military of global opposition to its Feb. 1 takeover and support for a return to Myanmar’s democratic transition, though any nation can call for a vote. 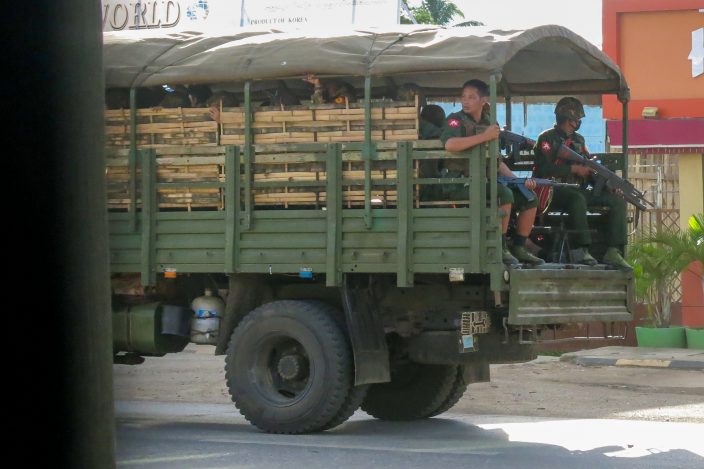 FILE - In this May 23, 2021, file photo, military troops and police go on patrol at Kayah state, eastern Myanmar. At least one-quarter of the people in Myanmar's smallest state have been forced to flee their homes because of combat with the military junta that seized power in February, raising fears of a possible humanitarian tragedy including thousands of civilian deaths, a U.N. expert said Wednesday, June 9.(AP PhotoFile)

The draft resulted from negotiations by a so-called Core Group including the European Union, many Western nations and the 10-member Association of Southeast Asian Nations known as ASEAN, which includes Myanmar. A U.N. diplomat said there is an agreement with ASEAN to seek consensus, but what will happen with ASEAN members if there is a vote remains unclear.

The resolution’s approval would mark one of the few times that the U.N.’s most representative body expressed itself against a military coup and called for an arms embargo.

Canada’s U.N. Ambassador Bob Rae, a member of the Core Group, said Thursday that everyone has been working hard “to reach a broad consensus” on the text, and discussions were still under way on whether it would be approved by consensus or be put to a vote. 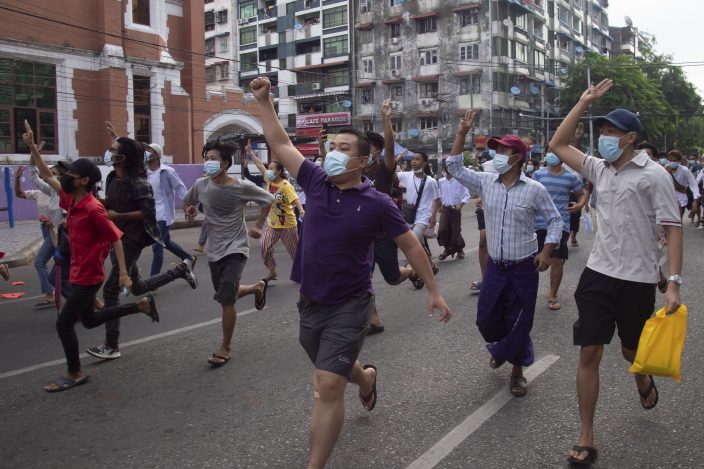 Myanmar for five decades had languished under strict military rule that led to international isolation and sanctions. As the generals loosened their grip, culminating in Suu Kyi’s rise to leadership in 2015 elections, the international community responded by lifting most sanctions and pouring investment into the country. Her party was reelected by a landslide in November elections, but the military contends the vote was fraudulent and took over before the new Parliament was seated.

Widespread opposition to the junta's rule began with massive nonviolent protests. After soldiers and police used deadly force to crush the peaceful demonstrations, a low-level armed insurrection has emerged in both the cities and countryside.

Last week, the U.N. human rights office cited credible reports that at least 860 people have been killed by security forces since Feb. 1, mostly during protests, and that more than 4,800 people — including activists, journalists and opponents of the junta — are in arbitrary detention.

Speaking of the draft resolution, Canada’s Rae said: “I think it’s a strong statement by the General Assembly about our strong opposition to what’s been happening in Myanmar, and our strong desire for a shift back to a process of attaining democracy in the country, civil and economic rights for everybody including the Rohingya.”

Unlike Security Council resolutions, General Assembly resolutions are not legally binding, but they do reflect global opinion and supporters of the draft believe it will have an impact.

Rae, a former Canadian special envoy to Myanmar, doesn’t believe the nation can return to its past isolation since people in Myanmar "have developed a taste for openness, for democracy, for participation, and for social and political rights,” he said. “And I don’t think the people are going to lose that taste. And I think that the answer is to do everything we can to sustain democracy.”

UN backs democracy in Myanmar and urges release of detainees