In a surprising result, British Prime Minister Boris Johnson's Conservative Party has been easily defeated in a special election for a seat that it has held for decades.

The Liberal Democrats, which was in a coalition government with the Conservatives between 2010 and 2015 before seeing its electoral fortunes wane dramatically, won Thursday's election in Chesham and Amersham, 35 miles (57 kilometers) northwest of London.

Sarah Green, the Liberal Democrat candidate, picked up around 57% of the vote and won a seat the Conservatives have held since it was created in 1974. She added around 30 percentage points to the party's result from the 2019 general election. 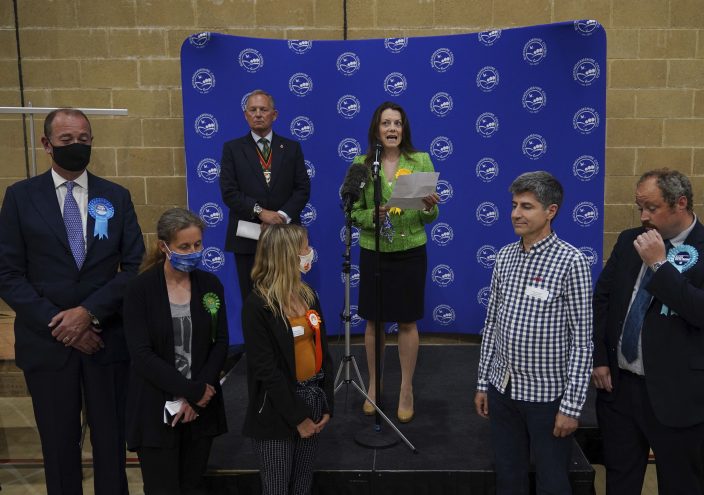 Sarah Green of the Liberal Democrats makes a speech after being declared winner in the Chesham and Amersham by-election at Chesham Leisure Centre in Chesham, Buckinghamshire, England where she defeated Conservative candidate Peter Fleet, left, who came second, early Friday June 18, 2021. (Yui MokPA via AP)

“This Conservative Party has taken people across the country for granted for far too long,” Green said Friday.

Her party leader, Ed Davey, said the result sent a “shockwave through British politics” by showing that the “Blue Wall” of Conservative seats in southern England could be vulnerable.

Chesham and Amersham are leafy, prosperous towns that are synonymous with traditional Conservative territory, in much the same way that the post-industrial towns in northern England have identified with the opposition Labour Party.

The Conservatives have made big inroads into Labour's “Red Wall” in recent years, winning a swathe of seats on a combination of factors, notably Johnson’s insistence that he would ensure that Britain leaves the European Union after years of parliamentary haggling. Having secured that, Johnson has managed to capture more support in Labour's heartland by promising to “level up” Britain through big infrastructure spending and other initiatives.

However, there are concerns among some Conservative supporters that the growing focus on northern seats has alienated the party's more traditional — and potentially more liberal — southern supporters. In the 2016 Brexit referendum, 55% of voters in Chesham and Amersham voted to remain in the EU.

Conservative policing minister Kit Malthouse branded the defeat “very disappointing” and said there must be a “fairly significant post-match analysis” on what went wrong for the party.

The reasons for the Conservatives' defeat are unclear although local issues featured heavily. Concerns have been raised about the high-speed rail line that will link London to Birmingham, which cuts through the region. Also the government's proposed planning reforms have sparked fears about more buildings in the countryside.

The defeated candidate, Peter Fleet, acknowledged the Conservatives had to rebuild “trust and understanding” with voters.

Despite the defeat, Johnson can still rely on a big majority of around 80 seats in the the 650-member House of Commons.