After a stirring tribute to Christian Eriksen and a ”magical” atmosphere created by their fans, Denmark’s players want to pay their supporters back at the European Championship.

They have one last chance to do so when they face Russia in Copenhagen on Monday, knowing a win could still be enough to see them through to the next round at Euro 2020.

The Denmark team on Friday was still processing the many emotions from its game against Belgium at Parken Stadium the previous evening, when a raucous crowd paid tribute to Eriksen with a minute’s applause after 10 minutes. Denmark took an early lead in the game but Belgium launched a second-half comeback to win 2-1. 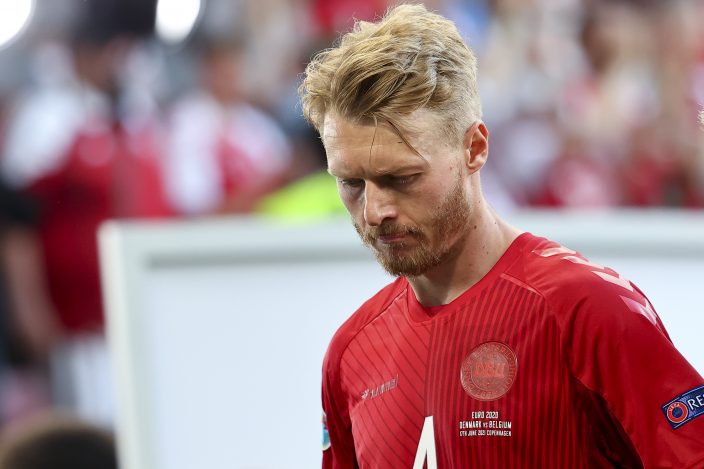 Denmark's Simon Kjaer walks off the pitch after the Euro 2020 soccer championship group B match between Denmark and Belgium, at the Parken stadium in Copenhagen, Thursday, June 17, 2021. Belgium won 2-1. (Wolfgang Rattay, Pool via AP)

”That atmosphere and that support, it was something I’ve never experienced before,” Denmark midfielder Pierre-Emile Hojbjerg said. ”It was exceptional and very, very powerful. So many people have supported us. Now all you want to do, for everything in the world, is to pay them back with everything you have. And that’s what we’re going to do on Monday.”

The Belgium game was Denmark’s first match since Eriksen suffered cardiac arrest in the opener against Finland and had to be resuscitated with a defibrillator. Even after the loss, the Danish players were serenaded and given a standing ovation by the entire stadium.

Denmark coach Kasper Hjulmand said it was ”overwhelming” to feel the support from fans, all the way from the team’s training base outside Copenhagen to the stadium. 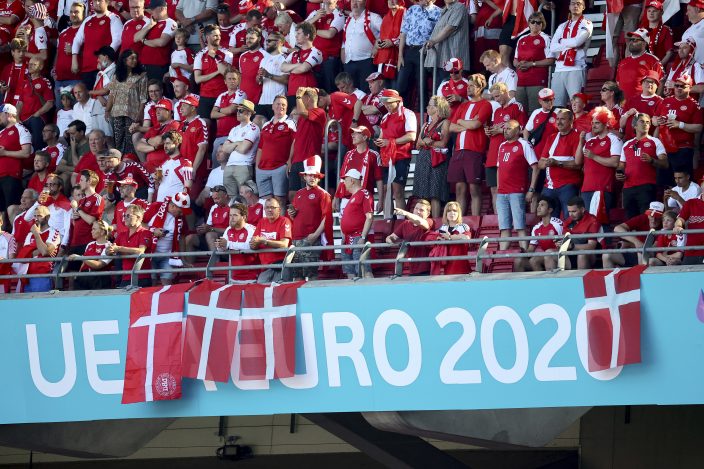 Denmark supporters in the stands prior to the Euro 2020 soccer championship group B match between Denmark and Belgium, at the Parken stadium in Copenhagen, Thursday, June 17, 2021. (Wolfgang Rattay, Pool via AP)

”To come into Parken and feel the energy, it was magical,” Hjulmand said. ”The stadium helped us deliver the way we did yesterday.”

Denmark lost to Finland 1-0 after play was resumed following a 90-minute break. But even with zero points after two games, Denmark still has a realistic chance of advancing from Group B.

A win over Russia could be enough if Belgium beats Finland.

”Now we have to finish the job on Monday,” Hojbjerg said.

Hjulmand said he could scarcely believe that his team has zero points after finishing with 23 shots in the first game compared to one for Finland. Against Belgium, the Danes had 22 total attempts to six for their opponents.

”Of course it’s about having that final sharpness and putting the ball in the net,” Hjulmand said.

The Danish soccer federation said Thursday that Eriksen will be fitted with an implantable device that can function as both a pacemaker and defibrillator. He has been in touch regularly with his teammates and sent them a message of support after the Belgium game.

And there’s no doubt that Denmark will continue playing for him.

”He’s with us all the time. He is with us here,” Hojbjerg said, touching his chest.