Four people died, one of them a child, when a migrant boat believed to be carrying 45 passengers capsized near Spain’s Canary Islands, Spanish authorities said Friday.

The boat was approaching Órzola on the island of Lanzarote on Thursday night when it flipped over a few meters (yards) from shore, throwing the passengers into the water.

Emergency workers and residents rescued 41 people, including 19 women and seven children, with sub-Saharan nationalities, and they worked overnight until Friday afternoon recovering the bodies of three adults and a boy, Spain's national police said. 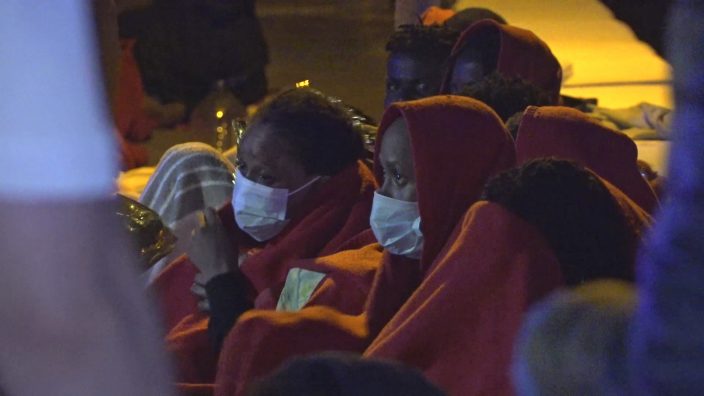 Migrants sit after being rescued at the island of Lanzarote in the Spain's Canary Islands on Friday, June 18, 2021. Spanish authorities say four people have died including a child after a migrant boat believed to be carrying 45 passengers capsized near Spain's Canary Islands. The boat was approaching Órzola on the island of Lanzarote on Thursday night when it flipped over a few meters (yards) from shore, throwing the passengers into the water. (Europa Press via AP)

Two more boats carrying a total of 110 migrant passengers reached the Canary islands of Fuerteventura and El Hierro on Friday, according to the Canaries’ emergency services.

In the last two years, the number of migrants and asylum-seekers embarking on the perilous Atlantic Ocean voyage from the coast of West Africa to the Spanish archipelago has increased significantly. More than 23,000 people arrived by sea to the Canaries in 2020 and nearly 6,000 have come so far this year.

Border closures and restrictions on air travel during the COVID-19 pandemic have partly contributed to the increased traffic, along with tougher border controls to prevent Mediterranean Sea crossings to Europe.

The latest deaths in Órzola raise this year's toll on the Atlantic route to the Canaries to more than 130 dead or missing, according to the U.N.’s migration agency's Missing Migrants Project. Only 59 of those bodies were recovered.

The International Organization for Migration acknowledges the number is likely an undercount of the actual death toll.

Follow all of AP’s global migration coverage at https://apnews.com/hub/migration