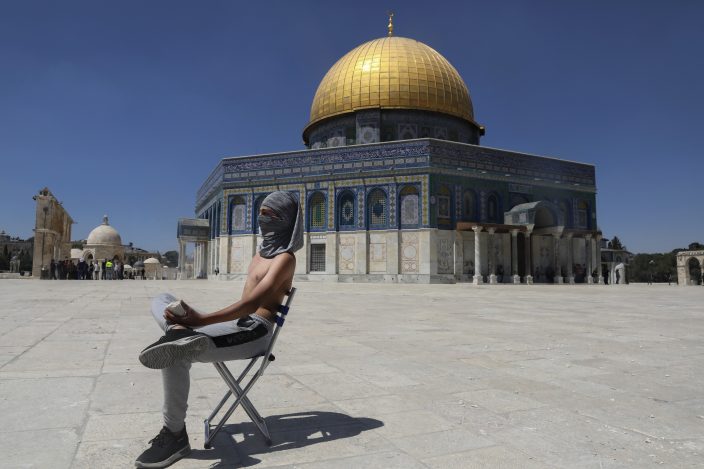 A masked Palestinian demonstrator holds a stone during clashes with Israeli security forces in front of the Dome of the Rock Mosque at the Al Aqsa Mosque compound in Jerusalem's Old City, Friday, June 18, 2021. Hundreds demonstrated after Friday prayers in response to a rally held by Jewish ultranationalists on Tuesday in which dozens had chanted "Death to Arabs" and "May your village burn." The Palestinians protested against insulting Islam's Prophet Muhammad, after online video showed some of the participants in the Tuesday march denigrating him. (AP PhotoMahmoud Illean) 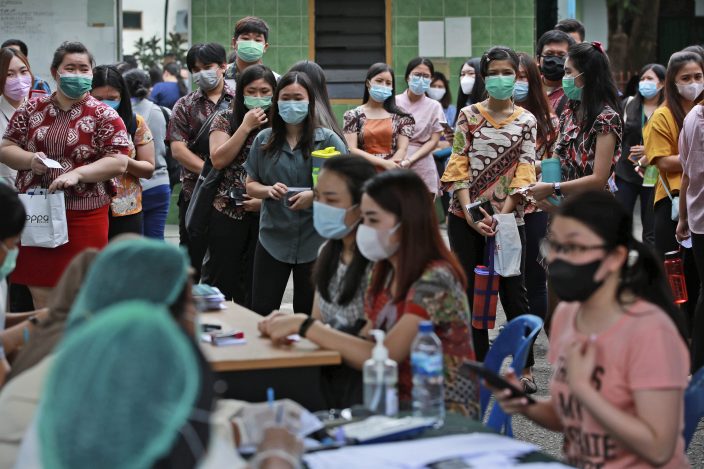 People line up as they wait for their turn to get a shot of the Sinovac COVID-19 vaccine during a mass vaccination at Putri Hijau Military Hospital in Medan, North Sumatra, Indonesia, Friday, June 18, 2021. Indonesia's president ordered authorities to speed up the country's vaccination campaign as the World Health Organization warned of the need to increase social restrictions in the country amid a fresh surge of coronavirus infections caused by worrisome variants. (AP PhotoBinsar Bakkara)

AP POLL-VIRUS OUTBREAK-REOPENING — Many Americans have started to relax precautions taken during the COVID-19 pandemic at least some of the time and have resumed participating in everyday activities, even as many continue to wear masks in public and worry about whether coronavirus-related restrictions were hastily lifted, a new poll shows. By Adrian Sainz and Hannah Fingerhut. SENT: 980 words, photos, video.

MIGRATION-GREECE-PUSHBACK — Around dawn one recent spring day, a dinghy carrying nearly three dozen people reached the Greek island of Samos from the nearby Turkish coast. Within 24 hours, the Turkish coast guard found the same group drifting in a life raft, but a Palestinian woman and her three children were missing. Days later, they appeared in Samos’ main town to apply for asylum. Their presence is one of the most tangible indications so far that summary deportations known as pushbacks, which Greece vehemently denies carrying out, are occurring. By Michael Svarnias and Elena Becatoros. SENT: 1,000 words, photos. 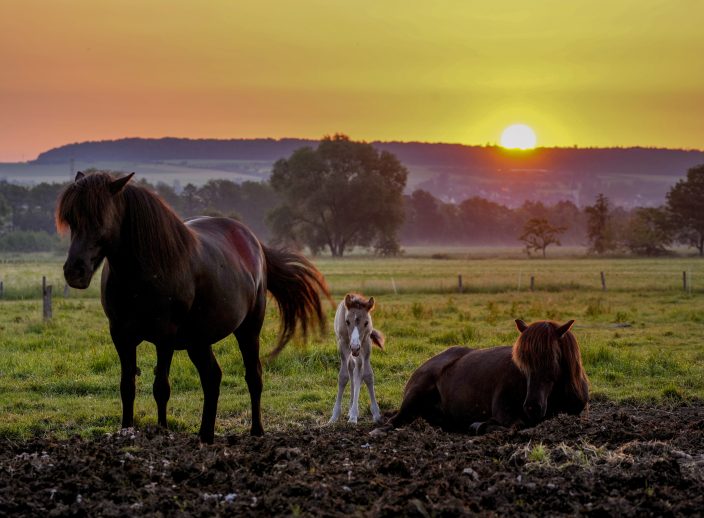 A two-day-old Icelandic foal stands next to its mother, right, as the sun rises in Wehrheim near Frankfurt, Germany, Friday, June 18, 2021. (AP PhotoMichael Probst)

VIRUS OUTBREAK — The official COVID-19 death toll in Brazil is about to hit 500,000, the second-highest in the world. At the same time, science is on trial inside the country and the truth is up for grabs. Brazil’s Senate is publicly investigating how the toll got so high, focusing on why President Jair Bolsonaro’s far-right government ignored opportunities to buy vaccines for months while it relentlessly pushed hydroxychloroquine. By David Biller and Debora Álvares. SENT: 1,000 words.

IRAN-ELECTIONS — Iranians vote in a presidential election dominated by a hard-line protege of Supreme Leader Ayatollah Ali Khamenei after authorities disqualified nearly all of his strongest competition, leading to what appeared to be a low turnout fueled by apathy and calls for a boycott. By Jon Gambrell. SENT: 980 words, photos. UPCOMING: Voting is scheduled to run until midnight local, though it can be extended to 2 a.m. With AP Photos. With IRAN-ELECTIONS-EXPLAINER; IRAN-ELECTIONS-GLANCE; IRAN-ELECTIONS-CANDIDATES.

CATHOLIC BISHOPS — U.S. Catholic bishops overwhelmingly approved the drafting of a “teaching document” that many of them hope will rebuke Catholic politicians, including President Joe Biden, for receiving Communion despite their support for abortion rights. The result of the vote — 168 in favor and 55 against — was announced Friday near the end of a three-day meeting of the U.S. Conference of Catholic Bishops that was held virtually. By National Writer David Crary. SENT: 430 words, photos. Developing.

REPUBLICANS-CONSPIRACY THEORIES — Since Donald Trump left the presidency, events mounted nationwide by his supporters have morphed into a convention circuit of delusion centered on the false premise that the election was stolen — which a majority of Republican voters now believe. By Jill Colvin. SENT: 1,270 words, photos.

JUNETEENTH-ABOLITION-AMENDMENT — As the nation this week made Juneteenth a federal holiday, lawmakers are reviving calls to end a loophole in the Constitution that has allowed another form of slavery to endure. National lawmakers told The Associated Press they will reintroduce legislation to revise the 13th Amendment, which bans enslavement or involuntary servitude except as a form of criminal punishment. By Terry Tang. SENT: 1,100 words, photos.

NOT REAL NEWS — The misinformation circulating online this week includes multiple claims related to COVID-19. Some posts insisted virus variants are being named after particular brain waves, which they linked to a supposed conspiracy to control people through technology. In fact, there’s no connection. SENT: 1,600 words, photos.

VIRUS OUTBREAK-BIDEN — President Joe Biden is set to announce that 300 million COVID-19 shots have been administered in the 150 days since he took office on Jan. 20, the White House said in previewing the president’s latest coronavirus update. SENT: 427 words. UPCOMING: Developing from 2:15 p.m. Biden remarks, 550 words by 5 p.m., photos, video.

VIRUS OUTBREAK-ITALY — Italy is requiring persons who arrive from Britain to do five days of quarantine as well as take a COVID-19 swab test. Italian Health Minister Roberto Speranza said he signed the order as concern builds about a soaring increase of cases in Britain involving the delta variant. SENT: 230 words, photos.

ASTRAZENECA-VACCINES — A Belgian court ruled that coronavirus vaccine-maker AstraZeneca had committed a “serious breach” of its contract with the European Union amid a major legal battle over delivery obligations that has tarnished the company’s image. SENT: 640 words, photo

VIRUS-OUTBREAK-FRANCE-LA-BISE — The double-cheeked embrace that was a customary greeting in France before the coronavirus pandemic saw it largely abandoned as a potential kiss of death is back with a presidential seal of approval. SENT: 300 words, photos.

VIRUS-OUTBREAK-INDIA-EXPLAINER — Starting Monday, every Indian adult can get a COVID-19 vaccine dose for free. SENT: 660 words, photos. With VIRUS-OUTBREAK-THE-LATEST.

VIRUS-OUTBREAK-MIDEAST — The Palestinian Authority is calling off an agreement whereby Israel would transfer 1 million doses of coronavirus vaccines to it in exchange for a similar number later this year. The PA says the doses, which Israel began shipping to the occupied West Bank on Friday, are too close to expiring. SENT: 730 words, photo.

CAPITOL BREACH-VIDEOS — New videos released under court order provide a chilling new perspective on the chaos that unfolded at the U.S. Capitol on Jan. 6. The release of the footage comes as Republican lawmakers in Washington try to downplay and deny the insurrection. UPCOMING: 900 words by 5 p.m., photos, videos.

FEDERAL EXECUTIONS-BIDEN — Activists widely expected President Joe Biden to take swift action against the death penalty as the first sitting president to oppose capital punishment, especially since an unprecedented spate of executions by his predecessor ended just days before Biden took office. Instead, the White House has been mostly silent. SENT: 1,200 words, photo.

REPUBLICANS-INFLATION — Republicans are hoping to storm into next year’s midterm elections arguing that steep government spending under President Joe Biden and a Democratic Congress has triggered inflation that will ultimately hurt everyday Americans. SENT: 1,120 words, photos.

MILITARY-SEXUAL ASSAULT-BASES — Female soldiers at military bases in Texas, Colorado, Kansas and Kentucky face a greater risk of sexual assault and harassment, accounting for more than a third of all active duty women sexually assaulted in 2018, according to a new RAND Corporation study. Female soldiers at Fort Hood and Fort Bliss, both in Texas, faced the highest risk. SENT: 840 words, photos.

JUNETEENTH-STATES — Congress and President Joe Biden acted with unusual swiftness this week in approving Juneteenth as a national holiday. That sent many states scrambling to clarify their policies on the celebration of slavery’s end. States have been slow to move beyond proclamations by governors or resolutions passed by lawmakers to formally recognize the date as a paid holiday. SENT: 620 words, photos.

LAS-VEGAS-DROUGHT-VERSUS-GROWTH — Record-breaking heat and historic drought in the U.S. West are doing little to discourage cities from planning to welcome millions of new residents in the decades ahead. SENT: 950 words, photos.

ELECTION 2021-NYC MAYOR — Voters will likely pick the next mayor of New York City in a Democratic primary next week. The primary will also be a major test of ranked choice voting. That’s a system that lets voters rank several candidates in order of preference instead of choosing just one. SENT: 1,000 words.

MARIJUANA LEGALIZATION-VIRGINIA — The date for legalizing marijuana possession is drawing near in Virginia, and people have questions. Advocacy groups have been flooded with calls from people trying to understand exactly what becomes legal in July. SENT: 780 words, photos.

ETHIOPIA-TIGRAY CRISIS — A European Union envoy says Ethiopia’s leaders told him in closed-door talks earlier this year that “they are going to wipe out the Tigrayans for 100 years.” Ethiopia’s foreign ministry has dismissed Haavisto’s comments as “ludicrous." SENT: 630 words, photo.

ETHIOPIA-ELECTION — Ethiopians will vote Monday in a landmark election overshadowed by reports of famine in the country’s war-hit Tigray region and beset by logistical problems that mean some people won’t be able to vote until September. SENT: 940 words, photos.

NKOREA-US — North Korean leader Kim Jong Un orders his government to be prepared for both dialogue and confrontation with the Biden administration — but more for confrontation, state media reports, days after the United States and others urged the North to abandon its nuclear program and return to talks. SENT: 750 words, photos.

UNITED NATIONS-MYANMAR — The U.N. General Assembly is expected to approve a resolution calling on Myanmar’s junta to restore the country’s democratic transition and for all countries “to prevent the flow of arms into Myanmar,” diplomats say. SENT: 630 words, photos. With MYANMAR-JOURNALISTS — Myanmar extends detention of U.S. journalist Danny Fenster (sent).

BRITAIN-POLITICS — In a surprising result, British Prime Minister Boris Johnson’s Conservative Party has been easily defeated in a special election for a seat that it has held for decades. SENT: 550 words, photos.

UNITED-NATIONS-INTERVIEW — The outgoing U.N. humanitarian chief warned that “the explosion” in needs for humanitarian assistance in recent years will keep getting worse until major powers tackle the root causes of hunger and desperation — conflicts, extremism, climate change, poor governance, corruption and violence, to name a few. SENT: 950 words, photo.

AFGHANISTAN-ABDULLAH — The Afghan government’s chief peace envoy expressed fears that the Taliban will have no interest in a political settlement with the U.S.-supported administration in Kabul after the scheduled departure of American and NATO forces. SENT: 580 words, photos.

CANADA-US BORDER — Canada’s public safety minister says border restrictions on nonessential travel with the United States will be extended until July 21. Public Safety Minister Bill Blair says the move has been made in coordination with the U.S. SENT: 400 words.

IN THE HEIGHTS-COLORISM — Every year, Hollywood inevitably comes under criticism for its lack of racial diversity. But another lesser-known yet still pervasive problem also resurfaces: the lack of diversity in skin tone. It happened again with “In the Heights,” a film that was called out this week for its dearth of dark-skinned, Black Latinos in leading roles. SENT: 750 words, photos.

MEDIA-BRIDGING DIVIDES — The Gannett media company is promoting an effort to get Americans who live on either side of the ideological divide to talk to each other. The company has helped set up hundreds of video conferences with volunteers across the country willing to talk with people who disagree with them. SENT: 530 words, photo.

EURO-2020-PLAYER-COLLAPSES, Christian Eriksen was discharged from the hospital on Friday and immediately went to visit his Denmark teammates nearly a week after suffering cardiac arrest during a European Championship match. SENT: 250 words, photos.

EURO 2020-WEMBLEY-FANS — UEFA is in talks with the British government about allowing foreign soccer fans to fly into London for games in the latter stages of the European Championship to avoid moving them from Wembley Stadium. SENT: 360 words, phot.

TOKYO-ANY FANS — The top medical adviser to the Japanese government says the safest way to hold the Tokyo Olympics is without any fans. Fans from abroad have already been banned and organizers are to announce early next week if some local fans should be allowed. The Olympics open in just five weeks on July 23. SENT: 700 words, photos.