Congress and President Joe Biden acted with unusual swiftness this week in approving Juneteenth as a national holiday. That shifted the battle to the states, where the holiday faces a far less enthusiastic response.

Nearly all states recognize Juneteenth in some fashion, at least on paper. But most have been slow to move beyond proclamations issued by governors or resolutions passed by lawmakers. So far, only nine states have designated it in law as an official paid state holiday — Illinois, Louisiana, Massachusetts, New Jersey, New York, Oregon, Texas, Virginia and Washington. All but Texas, where the events of the original Juneteenth took place, acted after the killing of George Floyd last year.

This year alone, legislation to make Juneteenth a paid state holiday died in Florida and South Dakota and is stalled in Ohio, all states controlled by Republicans. But even in Maryland, where Democrats control the Legislature, a Juneteenth bill passed one chamber only to die in the other. 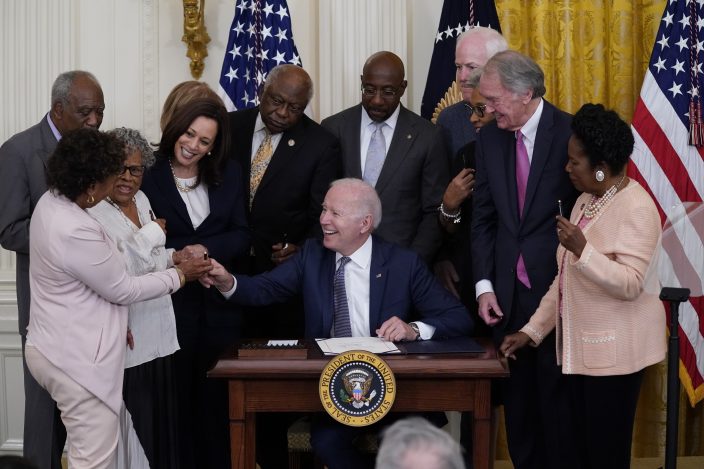 The effort recalls the drawn-out battles over recognizing Martin Luther King Jr. Day, the last time the federal government designated a new holiday. That legislation, finally passed in 1983, scheduled the holiday to begin three years later. It set off bitter debates in the states over whether to enact their own holidays.

Only a handful of states headed into Thursday's signing of the federal Juneteenth law with the paid holiday on the books to be celebrated in 2021. The governors of Washington, Illinois and Louisiana, by contrast, all signed more recent laws that were set to kick in for 2022, when June 19 falls on a Sunday. 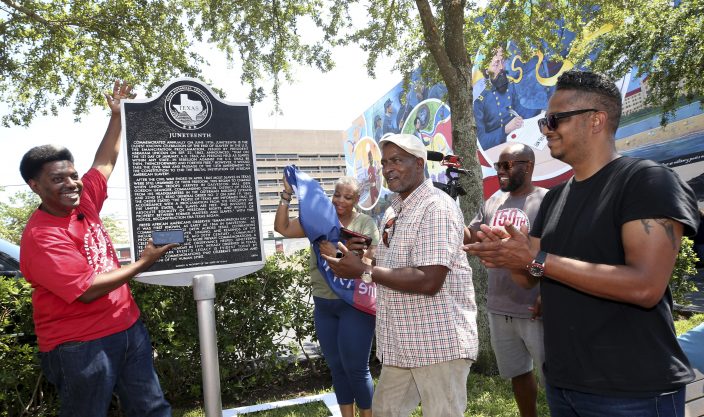 FILE - In this June 17, 2021, file photo, Sam Collins III, left, and others celebrate at the Juneteenth historical marker in Galveston, Texas, after President Joe Biden signed the Juneteenth National Independence Day Act into law. Only Texas, Virginia and New York headed into Thursday's signing of the federal Juneteenth law with the holiday on the books to be celebrated in 2021. (Jennifer ReynoldsThe Galveston County Daily News via AP, File)

In another twist, many states have laws that automatically recognize all federal holidays — even those not named in state statute.

Ohio state Sen. Hearcel Craig, a Columbus Democrat who is Black, said Friday that codifying Juneteenth in state law remains essential. He is sponsoring a Juneteenth bill that passed the Ohio Senate unanimously last session, but time ran out for its consideration in the House. Republicans control both of Ohio's legislative chambers. 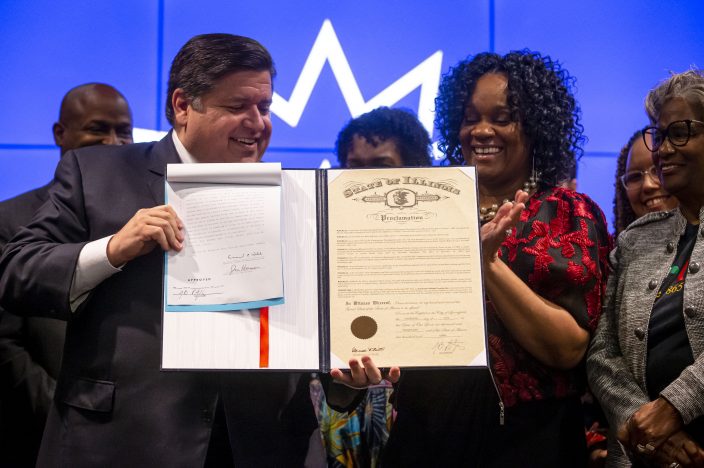 FILE - In this June 16, 2021, file photo, Illinois Gov. J.B. Pritzker and Illinois state Sen. Kimberly Lightford, D-Maywood, hold up the bill marking Juneteenth an official state holiday in Illinois during a bill signing at the Abraham Lincoln Presidential Library in Springfield, Ill. The governors of Washington, Illinois and Louisiana all signed laws that were set to kick in for 2022, adding to the muddled rollout. (Justin L. FowlerThe State Journal-Register via AP, File)

“My hope and expectation is that Ohio will choose to be a leader in the quest to honor Black history and the movement toward a more equitable world," Craig said. "And that's not hyperbole. ... It concerns not only African-Americans but all Americans. Put simply, Black history is American history."

North Carolina law caps the number of state holidays at 12, meaning Juneteenth could only be added if another holiday was dropped. Other states said Friday that whether Juneteenth becomes a paid holiday depends on union negotiations.

In Mississippi, Democratic state Rep. Bryant Clark has filed bills to make Juneteenth a state holiday for about 15 years. All have stalled.

Two other Mississippi lawmakers said Friday that they plan to file a bill to eliminate Confederate Memorial Day as a state holiday and replace it with Juneteenth.

“Sometimes, progress is extremely slow,” said Clark, a member of the Legislative Black Caucus. Several communities in Mississippi already hold Juneteenth celebrations. One is the capital city of Jackson, where the population is more than 80% Black.

Minnesota has recognized the third Saturday in June as Juneteenth since 1996, but the statute only obligates the governor to issue a proclamation each year honoring the observance. That's a common situation in the U.S., where the holiday is sometimes called Emancipation Day.

Calls by Minnesota Gov. Tim Walz, a Democrat, to make it an official state holiday have failed to gain traction so far in the Minnesota Legislature, the only one in the nation where Democrats control one chamber and Republicans control the other.

Hawaii is one of only three states left that has not marked the holiday at all. A bill recognizing Juneteenth was signed Wednesday, a day ahead of the federal legislation. It did not create a paid state holiday, however.

South Dakota does not officially recognize the holiday, but Gov. Kristi Noem has issued a proclamation celebrating it. The governor does not have the power to make it an official state holiday — that must be done through the Legislature. A bill to recognize it as a working holiday fell a handful of votes short of passing this year.

It was defeated by an unusual coalition of Democrats who felt the day should be recognized as a full-fledged holiday, rather than a working holiday, and conservative lawmakers who opposed recognizing the holiday at all.

Vaney Hariri, a Black business owner who organized a march after Floyd’s death, said that vote showed the entrenched attitude of many lawmakers who “would turn down a day off rather than celebrate your freedom from pain and captivity.”

Arizona dragged its feet for years on Martin Luther King Jr. Day, until it became the only state that did not have some sort of holiday inspired by the slain civil rights leader.

That long delay cost Arizona a Super Bowl and millions of dollars in tourism revenue from canceled conventions and other events. It also inspired a boycott by singer Stevie Wonder and a protest song by Public Enemy called “By the Time I Get to Arizona.”

Mecham’s action led to years of divisive political maneuvering, including a ballot measure that ended in defeat for King holiday supporters, before Arizona voters ultimately approved the holiday in 1992.

Warren H. Stewart Sr., pastor of the Institutional Baptist Church in Phoenix, helped lead a grassroots campaign to establish Arizona's King holiday. But he said he did not rejoice when Biden signed the Juneteenth law. He fears it will distract from legislation on vital issues such as voting rights and police reform.

“I see it as a distraction," Stewart said, "almost as a handout of some candy, but the meat of justice is still going to be denied.”