Trackhouse Racing introduced itself to Nashville outside of Tootsie's, the famed honkytonk located in the shadow of the Ryman Auditorium. In two years, it hopes to be NASCAR's newest professional sports team.

Trackhouse is in its first season of existence and based in North Carolina, the hub for almost every NASCAR team. But team owner Justin Marks is a Nashville resident and by 2023 wants Trackhouse operating in Music City in the heart of the downtown entertainment district.

“We really want to be Nashville’s racing team," said Marks, who secured sponsorship from Tootsie's Orchid Lounge for the No. 99 Chevrolet driven by Daniel Suarez. 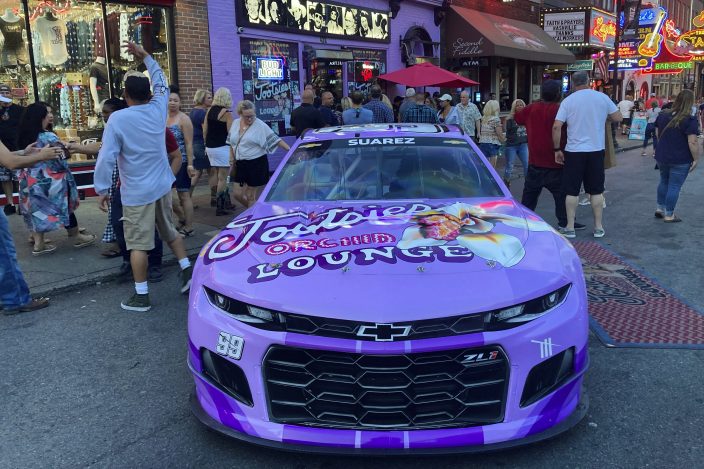 The No. 99 Chevrolet driven by Daniel Suarez for Trackhouse Racing is displayed outside Tootsie’s Orchid Lounge in Nashville, Tenn., Thursday, June 17, 2021. Trackhouse hopes to be operating from downtown Nashville by 2023 and Marks is using Sunday’s first Cup race in the market in 37 years to lay the groundwork for his move. (AP PhotoJenna Fryer)

The Chevy this week has been wrapped in purple and adorned with a pair of large orchids to match Tootsie's iconic building located on Lower Broadway. It will race Sunday when NASCAR's Cup Series returns to Nashville for the first time in 37 years.

Nashville Superspeedway re-opened after a decade of dormancy and the track will cap a three-day weekend with its first ever Cup race. It's an important race for Marks, who has an unconventional, long-term vision for this new NASCAR team.

He has partnered with Pitbull and the entertainer will be at the track Saturday and Sunday for his fourth race of the season. Suarez, the 2016 Xfinity Series champion and only full-time Mexican driver in NASCAR, is in his fifth Cup season but happier with Trackhouse than his previous three teams. The pairing with Suarez and Pitbull fits Marks' goal to reach a demographic largely untouched in NASCAR. 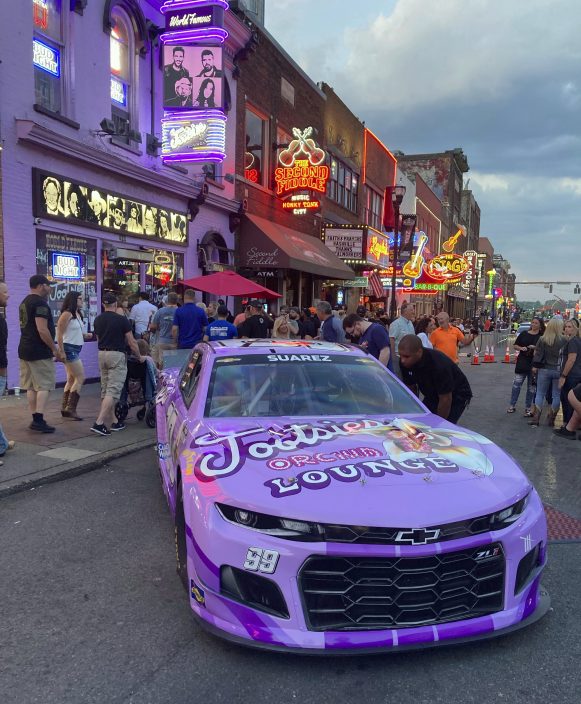 The No. 99 Chevrolet driven by Daniel Suarez for Trackhouse Racing is displayed outside Tootsie’s Orchid Lounge in Nashville, Tenn., Thursday, June 17, 2021. Trackhouse hopes to be operating from downtown Nashville by 2023 and Marks is using Sunday’s first Cup race in the market in 37 years to lay the groundwork for his move. (AP PhotoJenna Fryer)

“A lot of what we're doing with the 99 car is trying to tap into the United States' Latin market, which has a spending power of $1.3 trillion a year,” Marks said in an interview with The Associated Press. “It's a large group of people, passionate sports fans, and they are American consumers. There's not really another team in NASCAR that has infiltrated that market.”

And he wants to do it from Nashville, but in the entertainment district and not the industrial park-type setup many NASCAR teams have built.

“We don't want to build something the way they exist in Charlotte, we want something in downtown Nashville that is a public business open to the public every day that is a racing-themed attraction,” Marks said. “We want to incorporate entertainment, music, everything that is synonymous with Nashville but with that Americana-racing theme.”

There is still this first season to get through on the track, as well as Marks' search for a charter that guarantees Suarez a spot in the field each week. Trackhouse leased a charter from Spire Motorsports this year but NASCAR rules don't allow the team to lease the same charter in consecutive seasons. Spire said Friday it has sold two of its three charters to Kaulig Racing for that team to move to Cup next season.

That leaves Marks scanning the market and trying to determine his best path.

Suarez is with his fourth team in four seasons but never happier than he is with Trackhouse.

“We have an amazing opportunity to do something different and I love the way Justin thinks, he thinks outside the box and has a lot of very cool ideas that I like,” Suarez said. “He doesn't mind to take risks and that's why I am here with him right now in this ride.”

Suarez, who is 22nd in the Cup standings, is in a tight cluster of drivers trying to crack the top 16 to earn a playoff berth. He's only 38 points behind Matt DiBenedetto in the 17th spot, but Suarez believes Nashville is where he can make up significant ground.

He's done well this year at tracks that have had a practice session, starting with the dirt track at Bristol where he led 58 laps and finished a season-high fourth. NASCAR will hold a 55-minute practice session on Saturday and then qualifications before Sunday's race.

NASCAR since the start of the pandemic has cut almost all practice and qualifying sessions, which has hurt less experienced teams. Suarez noted a tire issue cost him a top-10 finish at Charlotte, where the Cup cars did practice, and that a win is within reach this season.

“I feel like we have the speed. We are still making mistakes as a new group,” said Suarez, who noted Trackhouse experimented last week at Texas and “we completely missed it.”

“Those are the things that we are paying the price once in awhile of a new group not having practice or any testing," he said. "But we are really smart, we know what we have to do, we know what works for us and we're trying to stick with that plan.”