Yan Gomes hit a game-ending single in the ninth inning, Erick Fedde extended his scoreless streak to 20 innings and the Washington Nationals two-hit the first-place New York Mets in a 1-0 victory Friday night.

Juan Soto opened the ninth with a walk and moved to third on Ryan Zimmerman's single to right. Gomes then singled to left to beat Edwin Díaz (1-2).

Brad Hand (4-2) pitched the ninth to close out Washington's gem. The Nationals have won a season-high five straight. 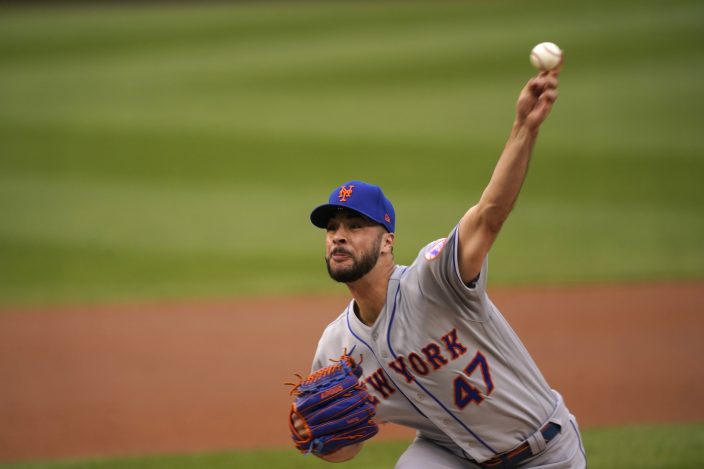 Fedde pitched seven dominant innings, allowing two hits and four walks while striking out six. His last out was Tomás Nido's grounder to third, and the typically stoic Fedde yelled and flexed his arms on his way off the field.

The right-hander's scoreless streak is the longest on the team this season, one inning more than ace Max Scherzer's earlier run. Fedde began the run May 11, and it spans nearly a month-long stint on the COVID-19 injured list that ended last Saturday.

Fedde’s ERA is down to 3.33. He has been crucial for the Nationals since Stephen Strasburg was placed on the 10-day injured list June 2. Friday night was his second start of seven shutout innings among his last three times on the mound.

The Nationals loaded the bases with one out in the third. Trea Turner’s crisp grounder to third was grabbed by Jonathan Villar, who stepped on the bag and threw to first for a double play. The Nationals entered the game 28th in OPS with the bases loaded.

Washington pulled together another threat in the bottom of the sixth when they put two on with one out to chase Lucchesi. Miguel Castro relieved and induced a ground-ball double play on a 3-1 pitch to Zimmerman. The Nationals grounded into three double plays Friday.

The Nationals reinstated 3B Starlin Castro from the restricted list on Friday. Castro left the team Tuesday night for “family reasons″ and missed Wednesday’s series finale against the Pittsburgh Pirates. He was not in the starting lineup Friday because Nationals manager Dave Martinez wanted to give him a day to re-acclimate to ’baseball life” as well as see how Castro is doing generally. However, he pinch-hit in the eighth inning.

Nationals: Scherzer (right groin) threw from flat ground Friday before throwing a handful of pitches off the bullpen mound. He is expected to throw a full bullpen session Saturday. Scherzer (5-4, 2.21 ERA) was placed on the 10-day injured list June 15, retroactive to June 12, after getting just one out in his June 11 start.

Mets: RHP Jacob deGrom (right shoulder) threw a light bullpen session on Friday to remain in his regular between-starts routine. Mets manager Luis Rojas said the process with deGrom is still a “day-by-day” situation, and that deGrom is not experiencing any pain beyond usual post-start soreness. The MLB leader in ERA is expected to throw a full bullpen session Saturday. DeGrom (6-2, 0.54) left his Wednesday start after three innings because of right shoulder soreness.