Bryson DeChambeau stayed on the practice range under the lights after opening with a 73 in the U.S. Open. It was only when the lights went out that he found a solution.

“I was sleeping and it came to me in the middle of the night,” DeChambeau said after a 69 on Friday to get back into the mix at Torrey Pines. “Woke up and I was like, ‘Hmm. I’m going to try this.' My intuition is pretty good, so I went out and tried it and it worked.”

The middle-of-the-night epiphany: Keeping his right wrist bent a little longer through impact. 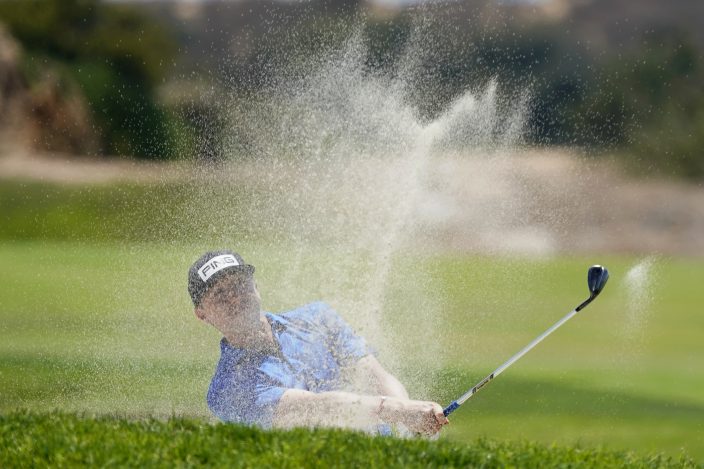 Mackenzie Hughes, of Canada, hits from the 17th fairway during the first round of the U.S. Open Golf Championship, Thursday, June 17, 2021, at Torrey Pines Golf Course in San Diego. (AP PhotoMarcio Jose Sanchez)

Whatever. It seemed to do the trick.

“For me it’s all about stabilizing the face, and so I was able to find that, and it worked out there for the most part,” he said. “Irons it didn’t work, but driver, it worked..”

DeChambeau was the last man on the range at Winged Foot when he won by six shots, so that wasn't unusual. Turns out he really does eat, sleep and think golf. 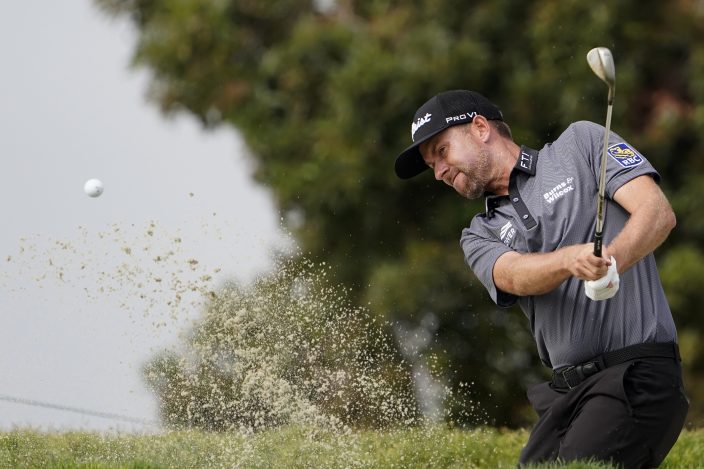 Webb Simpson plays a shot from a bunker on the first hole during the first round of the U.S. Open Golf Championship, Thursday, June 17, 2021, at Torrey Pines Golf Course in San Diego. (AP PhotoJae C. Hong)

It's not like he scribbled down a reminder to himself. DeChambeau said it's only one piece of his equation, and he could remember it.

“It's more just my intuition telling me there’s something weird here — ‘What’s going on?’ — and I couldn’t figure it out for an hour last night. And going back and just sitting down, eating dinner and just thinking about it, thinking about it — I literally won’t talk to anybody for like an hour — just thinking, thinking, thinking. And sure enough, I went to bed and I found a little something that worked for my driver.

“It didn’t work for my irons, so hopefully going to fix that this afternoon.” 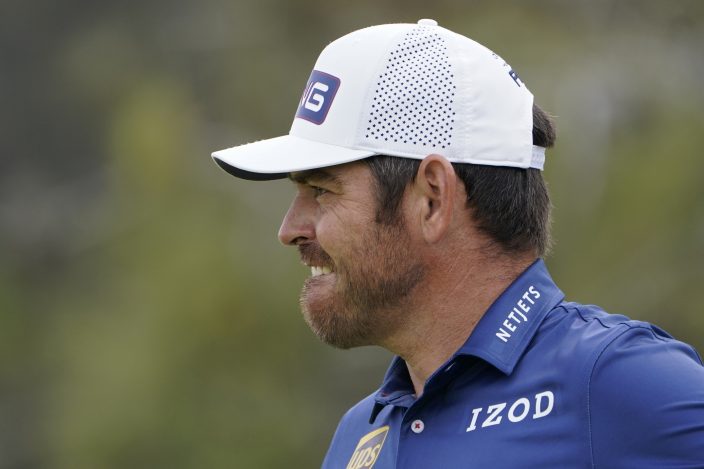 Louis Oosthuizen, of South Africa, watches his shot on the 11th green during the second round of the U.S. Open Golf Championship, Friday, June 18, 2021, at Torrey Pines Golf Course in San Diego. (AP PhotoJae C. Hong)

If not, perhaps a mid-afternoon nap will do the trick.

DeChambeau was sure to endear himself to players by adding that he has never won with his “A” game in every facet. Yes, he has won with his best stuff in certain parts of the game.

“But for the most part, my whole game hasn’t been that way,” he said. “And I want to see the day that I can have everything flowing on all cylinders.” 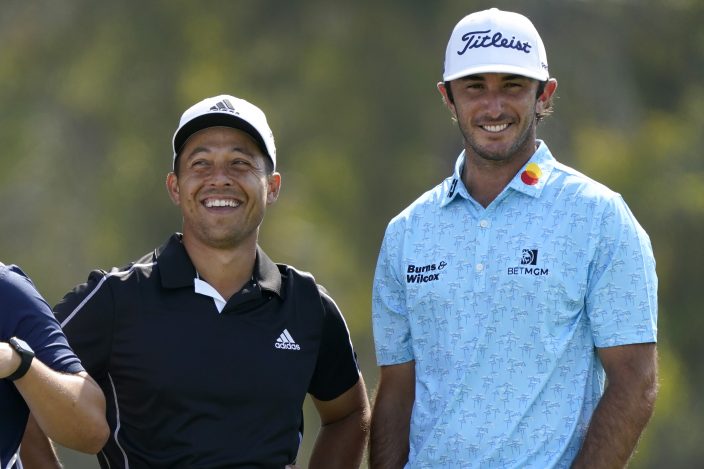 END OF A STREAK

Webb Simpson had rounds of 75-77 and missed the cut in the Masters. That was four years ago, and Simpson has not missed the weekend at a major since then.

That changed Friday at Torrey Pines. 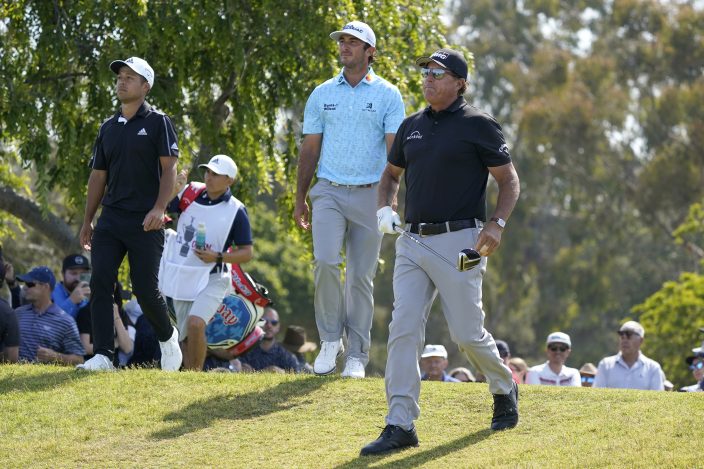 Simpson opened with a 79 in the U.S. Open and shot a 73 on Friday, missing the cut by six shots. That ended his streak of 16 consecutive majors making the cut. The current streak now belongs to Louis Oosthuizen, who made his 14th consecutive cut in a major.

And then there's Max Homa, who has missed the cut in all three majors this year. Homa also missed the cut in the Masters and U.S. Open last year, running his streak to six consecutive majors where he failed to make it to the weekend.

Others who have missed the cut in all three majors this year are Matt Kuchar and Zach Johnson.

Andrew Rozan stood over a 5-foot par putt on the 18th hole that he needed to make the cut. The putt slid by on the left, and he shot 76.

That marks the first time since 2007 that no amateur made the cut in the U.S. Open.

This Open had only nine amateurs, a result of the COVID-19 pandemic. The U.S. Mid-Amateur and the U.S. Junior Amateur were not held last year. A year ago, the USGA made up for lack of qualifying by inviting the top seven from the World Amateur Ranking, and John Pak was the lone amateur to make the cut.

Phil Mickelson was in position to drop shots and bring in the possibility of missing the cut at Torrey Pines. That's not how he saw it. His goal was to get back to even par.

“The last few holes, I tried to get a few close and kind of short-sided myself a couple times,” Mickelson said. “I left myself some challenging up-and-downs, and I ended up making the putts, which felt good. The fact is I was hitting a lot of good shots, a lot of fairways, driving the ball well, and was able to drive the ball aggressively for the most part.”

Anything can happen on the weekend, and Mickelson knows that as well as anyone. Unfortunately for him, bad things have happened to him while finishing runner-up a record six times. But he's still in the game in his quest for the only major he hasn't won.

“I didn’t make enough birdies today, but I’m hitting the ball well enough to get birdies on the weekend,” Mickelson said.

The 10th, 11th and 12th holes at Torrey Pines were among the five toughest holes on the course Friday, and it was particularly tough on those who started on the back nine.

That wasn't the case for Mackenzie Hughes of Canada.

That took him from 2 over to red numbers, and it carried Hughes to a 67 that left him only three shots out of the lead.

“To go 3 under through that stretch, I felt like I was more than three shots ahead of the field there,” Hughes said. “So that was big. Then just kind of felt like I got into the round quickly with that start and felt like I was back in the tournament. It felt good to do that early.”

Mike Davis takes break as CEO to be US Open caddie

Separated by pandemic, Molinari brothers unite at US Open

Medvedev into US Open semifinals without dropping set so far