Terance Mann scored a career-high 39 points and the Los Angeles Clippers advanced to a conference final for the first time in the franchise’s 51-year history, beating the Utah Jazz 131-119 on Friday night.

Paul George had 28 points and Reggie Jackson added 27 to help the fourth-seeded advance to face second-seeded Phoenix in the Western Conference finals. Game 1 is Sunday in Phoenix. 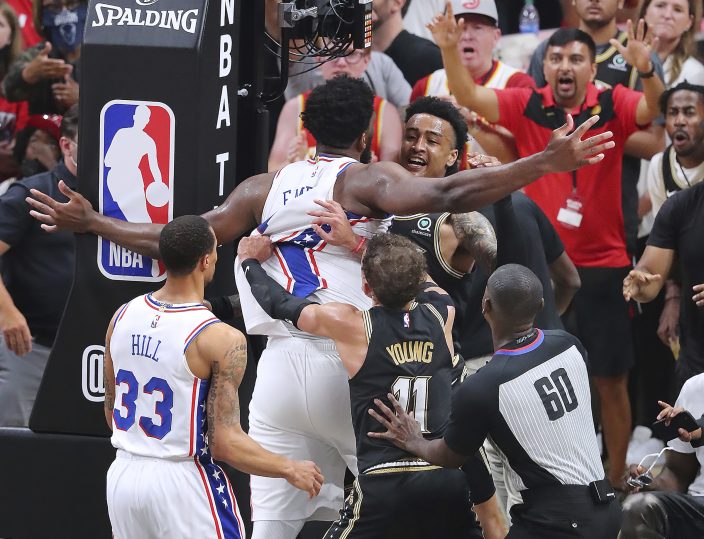 Philadelphia 76ers Joel Embiid, top center left, is called for an offensive foul against Atlanta Hawks forward John Collins, who was called for a technical foul, as they break into an altercation while an official, Hawks' Trae Young (11) and 76ers' George Hill (33) move in to break it up during the fourth quarter of Game 6 of an NBA basketball Eastern Conference semifinal series Friday, Jun 18, 2021, in Atlanta. (Curtis ComptonAtlanta Journal-Constitution via AP)

The Clippers trailed by 25 points early in the third quarter before rallying. It is the third time in franchise history the Clippers have trailed by at least 22 points in a postseason game and come back to win.

Mann helped fuel the rally with 20 points in the third quarter. Utah had a 94-91 lead going into the final 12 minutes, but Jackson gave the Clippers their first lead since early in the second quarter when his layup made it 96-95 advantage with 10:36 remaining. Mann also was just the third player in franchise history to make at least seven 3s in a postseason game.

The Clippers had a 107-106 lead with eight minutes remaining before they seized control with nine straight points, including five by Mann. The closest the Jazz would get after that was six. 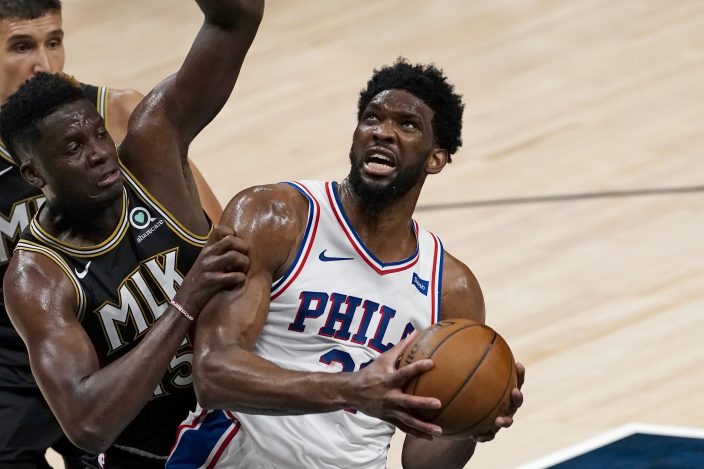 Philadelphia 76ers center Joel Embiid (21) is defended by Atlanta Hawks center Clint Capela (15) as he goes in for a basket during the first half of Game 6 of an NBA basketball Eastern Conference semifinal series Friday, June 18, 2021, in Atlanta. (AP PhotoJohn Bazemore)

Donovan Mitchell led top-seeded Utah with 39 points. It is the second time in franchise history the Jazz have blown a 25-point lead in a postseason game. They had the NBA’s top regular-season record but lost four straight for the first time all year.