The Padres have hit seven homers in winning the first two games of the four-game series. They came into the series struggling badly after losing 13 of 17 games, including going just 1-5 on a trip through New York and Colorado.

Coming off a 6-4 thriller Thursday night in which they hit four homers in the final four innings, including a pair of two-run homers in the ninth, the Padres didn't wait that long to break out on Friday night. Pham hit an opposite-field shot to right on rookie Tony Santillan's second pitch, his sixth. 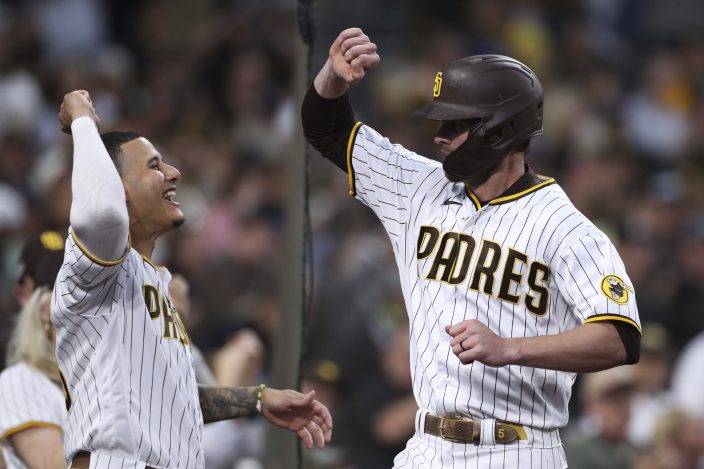 San Diego Padres' Wil Myers, right, is congratulated by Manny Machado after hitting a home run during the second inning of the team's baseball game against the Cincinnati Reds on Friday, June 18, 2021, in San Diego. (AP PhotoDerrick Tuskan)

Myers homered off the first floor of the Western Metal Supply Co. Building in the left-field corner leading off the second, giving him the most homers by a Padres player at Petco Park, 58. He had been tied with Adrian Gonzalez at 57.

Myers' 59th homer at the downtown ballpark was a leadoff shot off reliever Ashton Goudeau into the Padres' bullpen in the fourth for a 4-1 lead.

It was his ninth career multihomer game and first since Game 2 of the 2020 wild-card series against the St. Louis Cardinals. He has seven homers this season. 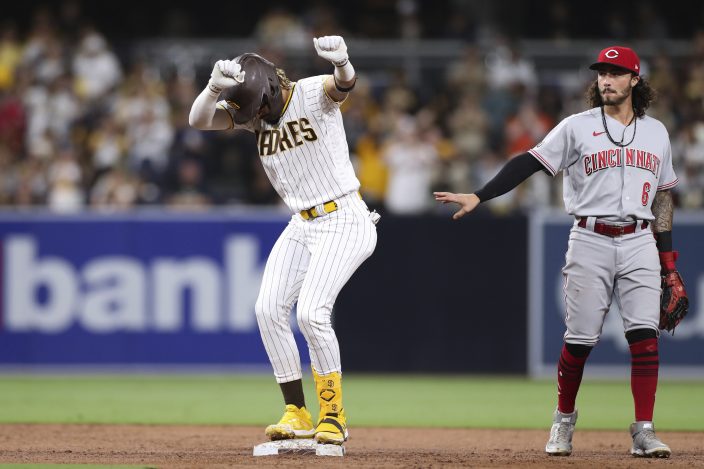 Goudeau loaded the bases with one out in the fourth and Fernando Tatis Jr. hit an RBI single to left.

Tatis hit a leadoff double in the third and eventually scored on Manny Machado's sacrifice fly.

Trent Grisham had a two-run double in the eighth. 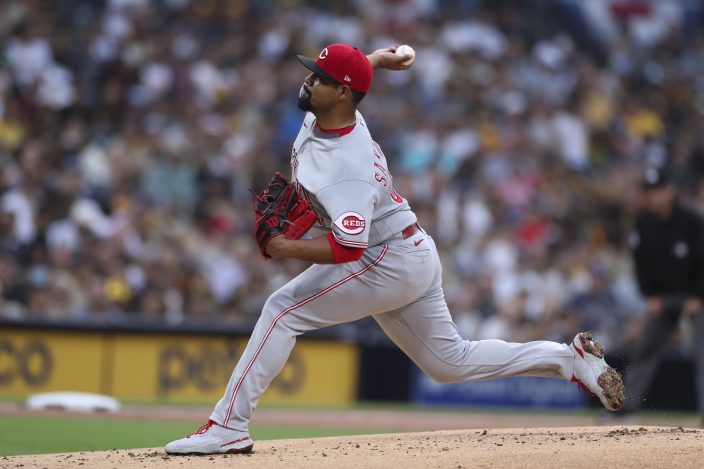 Paddack (4-5) was mostly brilliant in holding the Reds to two runs and six hits, with just one walk. He matched his career strikeout high set against the New York Mets on May 6, 2019, in his seventh big league start.

Paddack allowed Jesse Winker's RBI single in the third and Kyle Farmer's RBI base hit in the fourth.

The damage could have been worse in the fourth. Paddack walked Joey Votto and allowed Eugenio Suárez's infield single with one out. The tall right-hander leaped over Tatis, the shortstop, to avoid a collision as they both went for Suárez’s grounder. Paddack struck out Tucker Barnhart, allowed Farmer's run-scoring single and then struck out pinch-hitter Shogo Akiyama.

Santillan (0-1) allowed three runs and four hits in three innings, struck out three and walked one.

Plate umpire Larry Vanover took a foul ball by Winker off his mask in the top of the first inning and removed himself after the bottom of the inning. During a 13-minute delay while Chris Guccione changed into his protective gear to move behind the plate, the Padres' infielders came off the field and Tatis and South Korean rookie Kim Ha-seong led a dance-off to Psy's “Gangnam Style."

RHP Vladimir Gutierrez (3-1, 2.74) of the Reds is scheduled to start Saturday night in the third game of the four-game series. He will be making his fifth big league appearance and has won three straight starts. The Padres didn't plan to announce their starter until after Friday night's game.