That’s Italy’s approach for its final group match at the European Championship against Wales.

The Azzurri have already advanced to the round of 16 but they are playing with so much spirit and audacity that it’s gotten to the point where it’s become infectious. 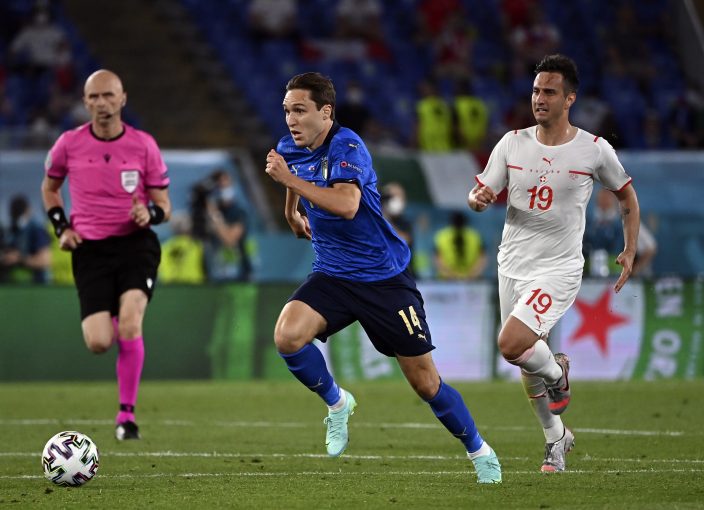 Italy's Federico Chiesa, centre, and Switzerland's Mario Gavranovic battle for the ball during the Euro 2020 soccer championship group A match between Italy and Switzerland at Olympic stadium in Rome, Wednesday, June 16, 2021. (Andreas SolaroPool Photo via AP)

So even though coach Roberto Mancini is expected to rest several starters from the opening two matches — both 3-0 wins — the reserves are just as anxious to carry out Italy’s free-flowing attacking game.

“There’s a lot of energy and a great atmosphere in this national team, which the coach deserves credit for. He’s really brought in a lot of enthusiasm,” said winger Federico Chiesa, who is expected to replace Lorenzo Insigne on the forward line.

Chiesa was often Italy’s top player in its perfect qualifying run for the European Championship and is coming off a breakout season at Juventus with 15 goals and 11 assists in all competitions. 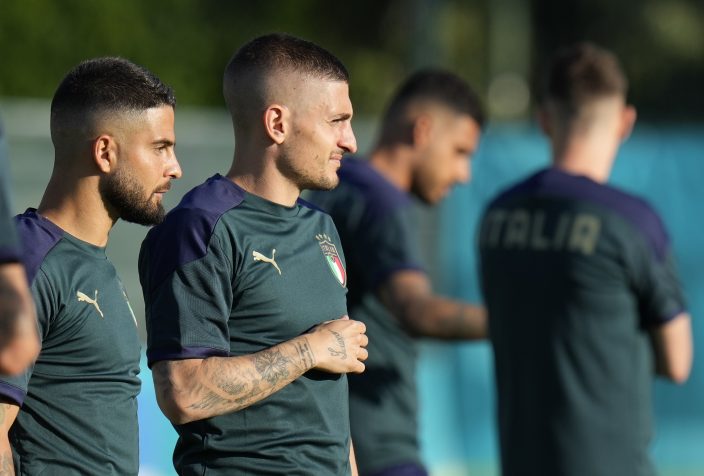 Calling players like Chiesa and Andrea Belotti “reserves” seems a bit awkward considering what they contributed during Italy’s 10 wins in 10 qualifying matches. Belotti is the co-leading scorer under Mancini with eight goals, matching the output of forward Ciro Immobile, who he'll likely replace against Wales.

“We have 26 starters and if I’m called upon I’ll make myself ready,” Chiesa said. “Every single one of us has a role to carry out to reach our goal. We’re here to go all the way.”

Marco Verratti, who was also a regular starter before missing the opening two matches of the tournament with a right knee injury, should also feature. He'll likely replace Manuel Locatelli, scored twice in Italy's win over Switzerland.

Having also overwhelmed Turkey in the tournament opener, Italy needs only a draw to guarantee first place in Group A.

Wales, which has four points, can secure a spot in the last 16 with a draw or if Switzerland fails to beat Turkey in the other group match.

“No pressure. We’ll go there and enjoy ourselves and if we can get our good players on the ball and a couple of us have a good night, then who knows? We might get a decent result,” said Wales right back Connor Roberts, who scored the second goal in a 2-0 win over Turkey.

Italy is quite familiar with Wales’ midfield standout Aaron Ramsey, who played for Juventus in Serie A the last two seasons.

“He’s a very intelligent player,” Chiesa said, “who I’ve learned to appreciate this year in training and in matches.”

Italy has won 10 straight matches — all clean sheets — and is on a 29-match unbeaten streak. That’s one match shy of the team’s record 30-game unbeaten run set under Vittorio Pozzo nearly a century ago.

The Azzurri’s form is all the more impressive considering they failed to qualify for the 2018 World Cup.

Italy had never scored more than two goals in a European Championship match and has now produced three in successive performances.

“We’ve got nothing to lose really,” Roberts said. “Nobody is really expecting us to go there and win and to put up a fight really, because they’ve been so good.”