Russian President Vladimir Putin faulted his imprisoned political rival for leaving Russia without legal permission, omitting the vital detail that the departure was, literally, an unconscious decision: Alexei Navalny was in a coma.

After meeting President Joe Biden in Geneva, Putin also weighed in on U.S. affairs in distorted ways as he tried to equate the insurrection at the U.S. Capitol with his political opposition at home and argued against the evidence that the United States is a more pernicious source of cyberattacks than his country.

Biden overstated the tribulations of his stateside political opponents. Republicans are not a “vastly diminished" party, as he contended in trying to assure the Group of Seven major industrial nations and NATO allies that his policies won't be shredded by the next election. 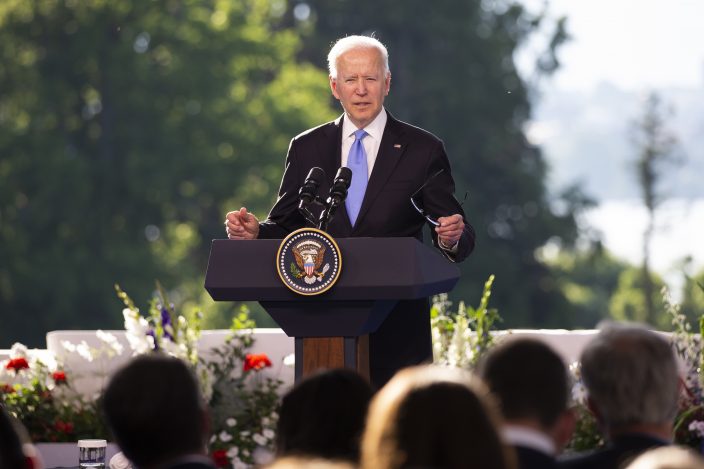 US president Joe Biden addresses the media during his closing press conference at the end of the US - Russia summit in Geneva, Switzerland, Wednesday, June 16, 2021. (Peter KlaunzerKeystone via AP, Pool)

A look at the veracity of some statements from Biden's week of diplomacy and his return to the domestic fray:

BIDEN: “I think it’s appropriate to say that the Republican Party is vastly diminished in numbers." — news conference Monday, when asked how he reassures allies that the U.S. will be a reliable partner in future years given former President Donald Trump’s enduring influence over the GOP. 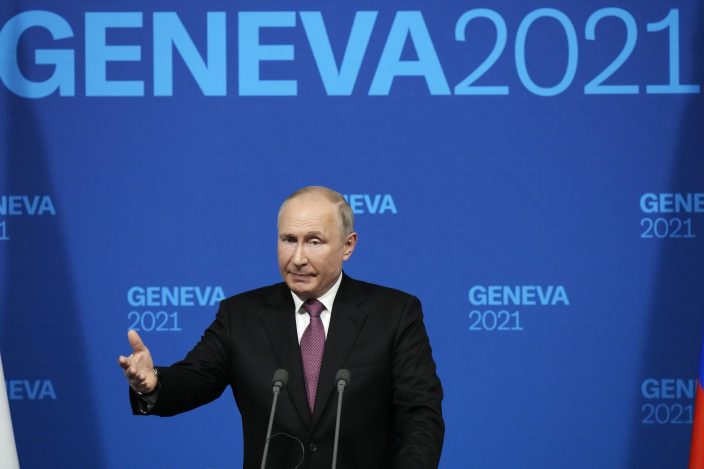 THE FACTS: No, the Republican Party hasn't withered. Everywhere you look — the Senate, the House, governor's offices, statehouses, the 2020 election results — it's potent.

Biden correctly pointed out fractures in the GOP leadership and ranks brought on by Trump's refusal to concede his presidential election defeat and his stoking of the mob that stormed the Capitol on Jan. 6. Biden's observation that “the Trump wing of the party is the bulk of the party” also may be true in terms of who exerts the most influence at the moment.

But the GOP is far from a spent force.

Gallup polling, for example, finds that 29% of Americans surveyed last month identified as Republican compared with 33% who said Democratic. That share is basically unchanged from a year ago.

Republicans in November narrowed Democrats’ margin in the House to single digits by flipping 15 seats while winning in each of the races that had a GOP incumbent. Republicans doubled their low number of women in the House to 31, a record for the party, according to the Center for American Women and Politics at Rutgers University, and added new ethnic minority lawmakers as well.

The Senate is evenly divided at 50-50. Republican governors lead in 27 states, Democrats in 23. In November, 74 million people voted for Trump, 81 million for Biden. Both vote counts were a record.

Elections for the House and numerous Senate seats will be held in November 2022.

PUTIN, defending Navalny’s imprisonment: “This person knew that he was breaching the laws effective in Russia. ... Consciously, I want to underline this, ignoring the demand of the law, this gentleman went abroad for treatment. ... He didn’t register with the authorities. ... He knew that he was then being investigated and he came back deliberately.” — Geneva news conference.

THE FACTS: He left the country in a coma; he did not leave Russia by choice.

Navalny was taken into custody Jan. 17 when he returned to Russia from five months in Germany where he was recovering from nerve-agent poisoning that he blames on the Kremlin.

Navalny fell severely ill on a domestic flight in August and was taken to a Siberian hospital in a coma. Two days later, after resistance from doctors, he was flown to Germany for treatment, still in a coma. Putin, however, implied that Navalny had made a conscious decision to leave the country, “ignoring the demand of the law" as he “went abroad the treatment.”

Authorities later determined that Navalny’s time abroad violated terms of a suspended sentence he had been handed in an embezzlement case that he says was politically motivated.

After Putin’s comments, Navalny’s wife, Yulia Navalnaya, posted on Instagram a photo of a covered human form on a gurney outside an airplane. “I kept a photograph of how Alexei, deliberately ignoring the requirement to be registered at the inspection, ‘went abroad for treatment,’” she wrote, mocking Putin’s words.

REP. KEVIN McCARTHY, House Republican leader: “Crime is rising in every step of the way.” — Fox interview Tuesday, in which he contended “America’s worse off because of Biden’s weakness.”

THE FACTS: No, crime isn’t rising across the board.

Violent crime is up. Burglaries and drug offenses are among categories where crime is down.

The FBI recorded 25% more homicides in 2020 than in 2019, and 12% more violent assaults. More murders are being seen nationwide, including in some cities that increased police spending and in some cities led by Republicans.

McCarthy and other Republicans have tried to blame Democratic “defund the police efforts” for squeezing police department budgets and enabling crime to rise. But Biden opposes cutting money for policing. He favors giving police departments more money, not less, as long as they adhere to standards of decency.

The Democratic-controlled House passed a police overhaul bill in March that avoided diverting money from police departments. It would ban chokeholds and end qualified immunity from lawsuits against police officers, while creating national policing standards. The bill has stalled in the evenly divided Senate, where Republicans oppose it.

PUTIN: “From American sources, it follows that most of the cyberattacks in the world are carried out from the cyber realm of the United States. Second place is Canada. Then two Latin American countries. Afterward comes Great Britain. Russia is not on the list of countries from where — from the cyberspace of which — most of the various cyberattacks are carried out.” — Geneva news conference on Wednesday.

THE FACTS: This portrayal defies the record. Russian-based digital malfeasance is well established by U.S. officials and security researchers alike.

The most damaging cyberattacks on record have come either from state-backed Russian hackers or Russian-speaking ransomware criminals who operate with impunity in Russia and allied nations. In one such attack, the NotPetya virus did more than $10 billion in economic damage in 2017, hitting shipping giant Maersk, the pharmaceutical company Merck, the food company Mondolez and more.

A global ransomware plague has caused tens of billions of dollars of damage in the past 18 months — hitting a company, hospital, school or other target about every eight minutes.

The May attack on the Colonial Pipeline, which prompted it to cut off fuel supplies to the U.S. East Coast for five days, was the first major attack on U.S. critical infrastructure by a Russia-linked criminal group.

While U.S. officials have said they don’t believe the Kremlin was directly involved, the Russian-speaking ransomware gangs behind the global scourge enjoy safe harbor in Russia and allied states and some of their members are alleged to have worked directly for Russian security services in espionage operations.

As well, Russian intelligence operatives famously interfered in the 2016 U.S. presidential election by hacking Democratic email accounts and orchestrating the release of those communications to boost Trump's campaign.

Putin spokesman Dmitry Peskov identified LexisNexis Risk Solutions as the source of his statement that most cyberattacks came from the “cyber realm” of U.S., Canada and other countries, not Russia.

But the authors of that research said their report was actually about criminal online fraud, not attacks such as ransomware that involve penetrating corporate and government networks, so it was not relevant to the issues Biden raised with Putin in Geneva.

PUTIN, on the U.S. Capitol insurrection: “People came to the U.S. Congress with political demands after the election. Over 400 people have criminal cases opened against them, they’re facing prison terms of 20, or maybe even up to 25 years. They’re being called domestic terrorists and accused of a range of other crimes. Seventy of them were immediately after these events, and only 30 of them are still under arrest, unclear on what grounds.” — Geneva news conference.

THE FACTS: His suggestion that dozens of Jan. 6 insurrectionists were arrested and quietly imprisoned for political speech with unclear legal grounds is incorrect.

More than 480 people have been arrested in connection with the attack, mostly on federal charges ranging from unlawfully entering the Capitol to conspiracy. They include more than three dozen members and associates of right-wing extremist groups such as the Proud Boys and the Oath Keepers.

Each of the suspects charged by the Justice Department was arrested based on a criminal complaint signed by a federal judge and requiring investigators prove they have probable cause the person committed a federal crime, or an indictment from a grand jury.

The cases have attracted media attention, prosecutors have highlighted many of the arrests with news releases and court records in the U.S. are generally public. The Justice Department also set up a website to list the cases it brought against suspects charged in the attack. It contains links to the charging documents against them.

So far, four people charged in the attack have pleaded guilty to federal charges.

BIDEN, on Putin comparing the Capitol attack to political opponents trying to undermine him in Russia: “I think that’s a ridiculous comparison. It’s one thing for — literally — criminals to break through a cordon, go into the Capitol, kill a police officer, and be held unaccountable than it is for people who are … marching on a capitol saying, you’re not allowing me to speak freely, you’re not allowing me to do A, B or C or D.” — Geneva news conference.

THE FACTS: His allegation that attackers killed a police officer is unproven. The truth about the death of Brian Sicknick, a U.S. Capitol Police officer, is more complicated.

The District of Columbia medical examiner’s office ruled that Sicknick died from natural causes, though the stressful circumstances he faced in the melee a day earlier had probably contributed to his condition. Two men have been charged with assaulting and spraying a chemical irritant at Sicknick in the riot.

Sicknick had a stroke. The medical examiner’s determination means that his death is not the result of any injuries.

Capitol Police accepted the medical examiner’s findings but said the ruling didn’t change the fact that Sicknick had died in the line of duty, “courageously defending Congress and the Capitol.”

AP FACT CHECK: Trump and Biden in their last clash on stage

AP FACT CHECK: Trump sees what others do not in the pandemic