Long before Usama Young’s father co-starred with him in a Super Bowl commercial, he influenced his love for football.

“The other day we were talking about our heroes and I was talking about how my dad taught me how to tackle, just be fearless and look the opponent in the eye and don’t put your head down,” said Young, a safety who played for the Saints, Browns and Raiders between 2007-15.

“I played with that fearlessness. And I think my dad pushing me every day, being able to be at my game, praying with me before every game, and him being able to see my last game before he passed away, that meant the world to me.” 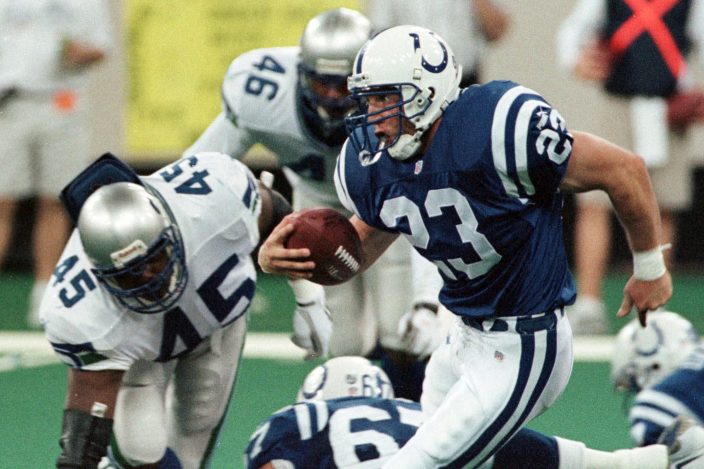 FILE - In this Sept. 2, 1999, file photo, Indianapolis Colts running back Keith Elias (23) runs by Seattle Seahawks' Sedrick Clark (45) and Scott Fields (46) to pick up a first down on the Colts' final drive of an NFL football game in Indianapolis. Elias’ dad never played football because he was too small but he influenced the way his son approached the game. Elias spent five seasons in the league as a running back with the Giants and Colts from 1994-99. (AP PhotoJohn Harrell, File)

Young sold lemonade during NFL games in Washington as a kid. His father, Leroi Young, got him the job and helped him regain it when he was fired a couple times. Before New Orleans beat the Colts in the 2010 Super Bowl, the league featured the father-son in a television ad.

“That was amazing,” Usama Young said. “He kept reminding me: ‘You ever thought after getting fired you’d be here today shooting a commercial?’ He said that only God could write this story.”

Keith Elias’ dad never played football because he was too small, but he influenced the way his son approached the game. Elias spent five seasons in the league as a running back with the Giants and Colts from 1994-99.

“He helped me keep everything in perspective,” Elias said. “He had a really difficult life with some extreme challenges and so he approached every day that no matter what you did, love people, love what you’re doing and give it your all.

"He didn’t care if I played football or if I played chess. He was just like: ‘Treat people the way you want to be treated, work as hard as you can and live every moment to the fullest.’ And that was the real life lesson I took from him.”

Both Young and Elias pass on the wisdom learned from their fathers with other NFL players in their current roles. Elias is the NFL’s senior director of player engagement and Young is a member of the NFL’s player engagement staff. They work closely with the league’s fatherhood initiative for players.

“It’s truly a brotherhood to celebrate how valuable fathers are in their families’ lives, in the community and how being a father is just something that we can’t take for granted,” Young said. “We understand how valuable we are. Now that I am a father, I see why my dad pushed me so hard. I see why my dad didn’t let me give up.”

The initiative celebrates past and present players and the positive influence paternal relationships have on families and communities. Throughout the year, the staff provides parenting resources, support, events and creating opportunities for peer-to-peer learning among fathers inside the league.

“The message is to encourage, empower and equip guys,” Elias said. “We give them the tools to be able to reach out and build that relationship (with their children) and encourage them to do it right.”

Young, who has a 5-year-old daughter and 2-year-old son, stressed the importance of leading by example, staying poised during adversity.

“Children watch our every move," Young said. “How we can lead by example as fathers, that’s of the utmost importance."