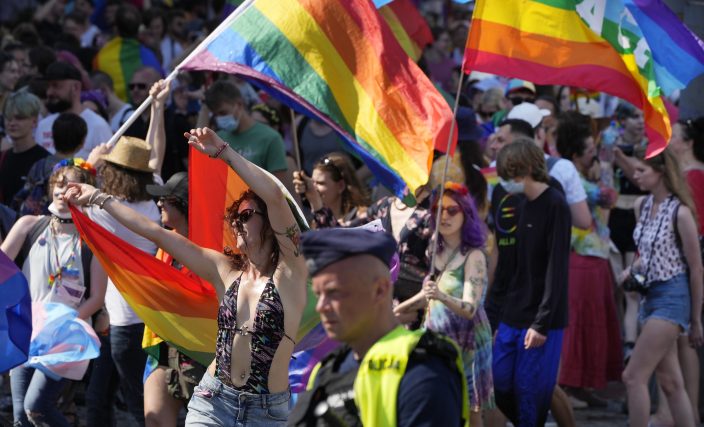 People take part in the Equality Parade, the largest gay pride parade in central and eastern Europe, in Warsaw, Poland, Saturday June 19, 2021. The event has returned this year after a pandemic-induced break last year and amid a backlash in Poland and Hungary against LGBT rights.(AP PhotoCzarek Sokolowski)

VIRUS OUTBREAK — Pandemic restrictions are falling away almost everywhere — except inside many of America’s nursing homes. Rules designed to protect the nation’s most vulnerable from COVID-19 are still being enforced despite widespread vaccination of residents, and plummeting infections and deaths. By Michael Rubinkam. SENT: 1,000 words, photos. 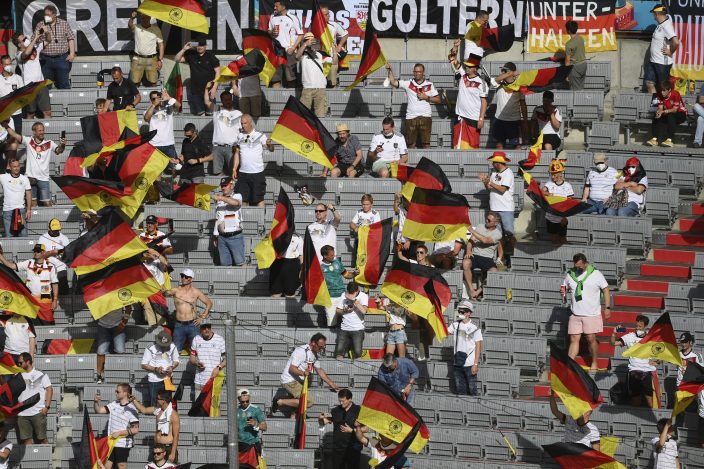 Germany fans wave flags and cheer ahead of the Euro 2020 soccer championship group F match between Portugal and Germany at the football arena stadium in Munich, Saturday, June 19, 2021. (Matthias HangstPool Photo via AP)

HEALTH-OVERHAUL-WHAT'S AHEAD — With the Affordable Care Act now secure in the framework of the nation’s health care programs, Democrats are eager to leap above and beyond. They want to expand insurance coverage for working-age people and their families, add new benefits to Medicare for older people and reduce prescription drug costs for patients and taxpayers. By Ricardo Alonso-Zaldivar. SENT: 810 words, photos.

CYBERSECURITY-RANSOMWARE-TAXES — As ransomware attacks surge, the FBI is doubling down on its guidance to affected businesses: Don’t pay the cybercriminals. But the U.S. government also offers a little-noticed incentive for those who do pay: The ransoms may be tax deductible. By Alan Suderman and Marcy Gordon. SENT: 870 words, photos.

TROPICAL WEATHER — A suspected tornado that spun off from Tropical Storm Claudette demolished or badly damaged at least 50 houses and mobile homes in southern Alabama, a sheriff says. Thunderstorms and high winds on the east side of Claudette battered the Florida panhandle and much of Alabama, as the weather system moved toward the North Carolina coast. By Kevin McGill and Russ Bynum. SENT: 890 words, photos, video.

CONFEDERATE-MONUMENT-TENNESSEE — Confederate Gen. Nathan Bedford Forrest’s polarizing presence has hung over Memphis since he moved here in 1852 — his legacy cemented by a giant statue that loomed over all who passed his gravesite in a popular park. Defenders considered him a hero for his Civil War exploits. Detractors called him a violent racist and noted his early leadership role in the Ku Klux Klan. Now the former slave trader’s remains are set to be moved to a new Confederate museum in Columbia, Tennessee — another milestone in the effort to remove statues, monuments, and now the remains, of Confederate leaders from public spaces. By Adrian Sainz. SENT: 900 words, photos. This is the Sunday Spotlight.

POLICING-GOP LAWS — After a year of protests over police brutality, some Republican-controlled states have ignored or blocked police-reform proposals and moved instead in the other direction. Lawmakers have granted greater powers to officers, made it harder to discipline them and expanded their authority to crack down on demonstrations. By Farnoush Amiri. SENT: 1,150 words, photos.

OBIT-MILKHA SINGH — Milkha Singh, one of India’s first sport superstars and ace sprinter who overcame a childhood tragedy to become the country’s most celebrated athlete, has died. He was 91. His family says Singh died late Friday of complications from COVID-19. SENT: 340 words, photos.

VIRUS OUTBREAK-AFGHANISTAN — Health officials say Afghanistan is fast running out of oxygen as a deadly third surge of COVID worsen. Hospitals are rationing their oxygen supplies, as Afghans desperate for oxygen bang on the doors of the few suppliers begging for cylinders for sick loved ones. SENT: 800 words, photos.

VIRUS OUTBREAK-BRITAIN — Thousands of heavy metal fans were camping, singing — and even moshing — at Britain’s first full music festival since the start of the coronavirus pandemic. The three-day Download Festival, taking place at Donington Park in central England, is one of a series of test events to see whether mass gatherings can resume without triggering outbreaks of COVID-19. SENT: 390 words, photos.

INDIA-VIRUS OUTBREAK — India’s coronavirus surge that left 180,000 dead over two months has devastated its universities, with the loss of professors leaving many students feeling anxious without their knowledge, guidance and often, friendship. At AMU, one of India’s top universities that has produced generations of politicians, jurists and scholars, more than 50 professors and other staff have died during the pandemic. SENT: 1.040 words, photos,

VOTING LAWS-VOTERS — Democrats and Republicans are fighting furiously over an issue that rarely sways elections — the mechanics of voting. But in Texas, one of the epicenters of the voting fight, actual voters have other pressing issues on their minds. By Nicholas Riccardi. SENT: 1,370 words, photos.

FACT-CHECK-WEEK — A look at the veracity of some statements from President Joe Biden’s week of diplomacy and his return to the domestic fray. SENT: 1,700 words, photos.

JUNETEENTH — Parades, picnics and lessons in history marked Juneteenth celebrations in the U.S., a day that marks the arrival of news to enslaved Black people in a Texas town that the Confederacy had surrendered in 1865 and they were free. The day has even more significance after Congress and President Joe Biden made it a federal holiday. UPCOMING: 600 words by 3 p.m., photos.

BRITAIN-ASCOT-QUEEN — Queen Elizabeth II was smiling broadly as she attended the final day of the Ascot races on Saturday, where environmental protesters urged the monarch to press politicians to act faster against climate change. SENT: 200 words, photos.

ARMENIA ELECTION — Armenians head to polls Sunday for an early parliamentary election stemming from a political crisis that has engulfed the country in the aftermath of the last year’s fighting with Azerbaijan over the separatist region of Nagorno-Karabakh. SENT: 940 words, photos.

HONG KONG-APPLE DAILY — A Hong Kong court has ordered the top editor of pro-democracy newspaper Apple Daily and the head of its parent company held without bail in the first hearing since their arrest under the city’s national security law. SENT: 620 words, photos.

FRANCE-PARTY VIOLENCE — A 22-year-old man lost his hand and several others were also injured amid violence as police tried to break up an unauthorized rave party in western France. SENT: 420 words, photos.

POLAND-LGBT PARADE — The largest gay pride parade in central Europe took place again in Warsaw for the first time in two years after a pandemic-induced break — and amid a backlash in Poland and Hungary against LGBT rights. SENT: 580 words, photos.

LEBANON-EU — The European Union’s foreign policy chief has berated Lebanese politicians for delays in forming a new Cabinet, warning the union could impose sanctions on those behind the political stalemate in the crisis-hit country. SENT: 450 words.

VATICAN-SCHUMAN-SAINTHOOD-PATH — A French statesman whose efforts helped pave the way for what eventually became the European Union has moved ahead on the Catholic church’s path toward possible sainthood. SENT: 400 words, photos.

MILAN-FASHION WEEK-DOLCE&GABBANA — Dolce & Gabbana are coaxing men off their sofas and back into the world with a resplendent collection inspired by the extravagant lighting installations of southern Italian street festivals. SENT: 310 words, photos.

EURO-2020-PLAYER-COLLAPSES — Christian Eriksen’s Denmark teammates say his visit came as a big surprise and that he gave them all a hug before having lunch with the team. SENT: 350 words, photos.