Josef Newgarden has earned the pole position for Sunday’s IndyCar race at Road America as he attempts to help Team Penske earn its first win of the season.

Newgarden had a fastest lap of 1 minute, 46.0186 seconds on a road course that extends just over 4 miles and features 14 turns. He will be joined on the front row by Colton Herta. Jack Harvey will start third.

Team Penske drivers were three of the top six qualifiers, with Will Power fourth and Simon Pagenaud sixth. 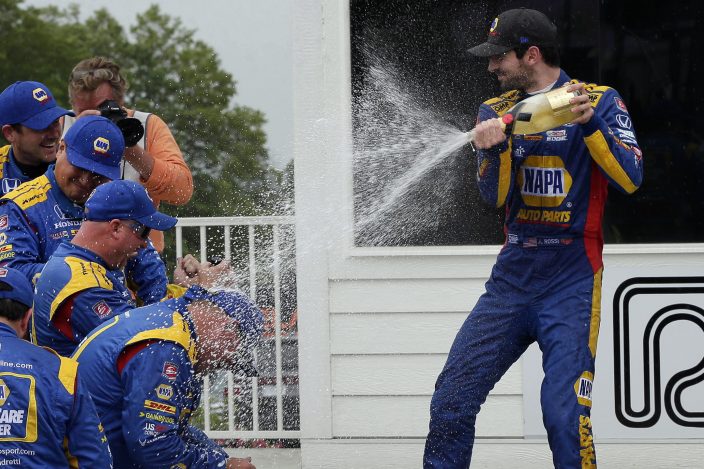 FILE - In this June 23, 2019, file photo, Alexander Rossi sprays champagne over his team following his win in the IndyCar Rev Group Grand Prix auto race at Road America in Elkhart Lake, Wis. Rossi tries not dwell on the bad days, and there have been plenty of those. He races Sunday at Road America in Wisconsin, site of his last victory two years ago. He went winless all last year and this season has led just two laps and is 14th in the standings.(Gary C. KleinThe Sheboygan Press via AP, File)

This is the longest that Team Penske has gone without a win to start a season since 1999, and it finished that year winless.

Team Penske has come close several times through the first eight races of the season, but it has been unable to close the deal. That was particularly apparent during last weekend’s doubleheader at the Raceway at Belle Isle Park in Detroit.

Power seemed in control of the first race until his car wouldn’t restart after a red flag. Newgarden was edged by Pato O’Ward in the second race.

Magnussen is a replacement for Felix Rosenqvist, who won at Road America last year but was injured in a crash last week at Detroit. Magnussen and Grosjean drove for Haas on the Formula One circuit in 2020 before both lost their rides at the end of the year.

Magnussen isn’t the only substitute in the field. Oliver Askew is filling in for Rinus VeeKay, who broke his clavicle in a cycling accident Monday.