Mikaela Shiffrin’s tentative plans on Father’s Day: Dinner with family. Perhaps a board game or a movie. Definitely some Jimmy Buffet or Paul Simon music.

Because that’s the sort of celebration Jeff Shiffrin would’ve wanted.

Rarely a day goes by when some image, moment or song doesn't remind the American skiing great of her dad, who died on Feb. 2, 2020, after an accident at his home in Edwards, Colorado. 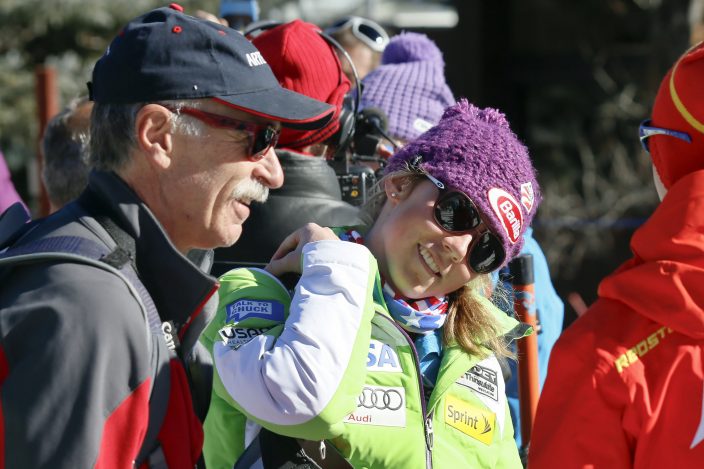 FILE - In this Nov. 23, 2012, file photo, Mikaela Shiffrin, center, talks with her ski technician, right, along with her father, Jeff Shiffrin, left, after a practice run for the women's World Cup ski race in Aspen, Colo. Not a day goes by that some image, moment or even song doesn't remind two-time Olympic gold medalist Mikaela Shiffrin of her dad, Jeff, who died February 2020, after an accident at his home in Colorado. (AP PhotoNathan Bilow, FIle)

The two-time Olympic champion can still hear his calming words of advice (a simple “focus" was a biggie). Or see him drumming on the steering wheel to whatever tune was on the radio. Or envision those family dinners followed by a lively board game.

“It’s not like this day, Father’s Day, is really anymore emotional,” Shiffrin said. “Because I can’t miss him more than I already do on a daily basis.”

His legacy lives on through a fund set up in his honor. The Jeff Shiffrin Athlete Resiliency Fund raised more than $3 million to help offset training and competition expenses through the pandemic. This season, the U.S. Ski & Snowboard Team and the Shiffrin family are hoping to raise $250,000 for a direct-to-athlete fund.

“He loved watching athletes overcome challenges and still be able to climb to the top of the podium or have success,” said Trisha Worthington, the chief development officer for the U.S. Ski & Snowboard Team foundation.

The proud father was frequently somewhere on the hill taking pictures of his daughter. If not there, he was in the stands, holding back tears when she won, which was quite a bit.

Shiffrin has a picture of them at dinner together in Hawaii as her phone's screensaver. She also carries around a festive holiday gnome, who has a big beard. It was a present she got for him (along with a matching one with braids for her mom, Eileen) on their last Christmas before his death.

The 2020-21 World Cup season was emotionally exhausting for the 26-year-old Shiffrin. There were good days (three World Cup wins) and plenty of sad days that had nothing to do with racing. Like after that January event in Zagreb, Croatia, when she finished fourth in the slalom.

“People thought it was because I got fourth and they were like, ‘I’m so sorry. You’ll do better next time,’” Shiffrin recounted. “I didn’t care about that. But I didn’t want to be like, ‘No, it’s because of my dad. It’s not because I got fourth.’ It just was one of those days that I didn’t want to be there at all. I wanted to be at the hotel in my bedroom with the door shut and the lights off and not not out there in that setting.”

That's the word she hears on days she's feeling blue or having rough training sessions.

It was always his way of getting her back to herself. Back in the zone of being the ski racer who has won 69 World Cup events, three overall titles and six world championships.

“But those are the kinds of things I think about.”

Music was part of their bond. Her dad loved the Beach Boys, Fleetwood Mac, Buffett and Simon. But he also appreciated the newer artists like Taylor Swift. He would drum along to the beat on the steering wheel before turning and asking the name of the song.

Shiffrin recently finished a giant slalom and slalom training session o n snow at Copper Mountain in Colorado. After all, it's a big upcoming season with the Winter Olympics in Beijing around the corner. She's thinking big, too — possibly competing in four or five events. The one up for discussion may be the downhill.

“I just want to see how things are going as we get closer, because the last thing I want to do is compete just for the sake of competing when I know that I have teammates who are dying for that spot,” said Shiffrin, who captured slalom gold at the 2014 Sochi Olympics and the giant slalom title during the 2018 Pyeongchang Games along with silver in the Alpine combined. “I’m not going to take that unless I really, really have a positive feeling about what I can do."

This will be an Olympics, though, without dad. Her parents groomed her and her brother, Taylor, to be skiers — to have fun on the slopes. The gold medals for Mikaela Shiffrin just followed.

The fund set up in his honor could pave the way for more golds, by other athletes.

Through the money raised on behalf of Jeff Shiffrin — and support from the Shelby Cullom Davis Charitable Fund — the organization was able to make a COVID-19 hardship payment of $1,300 each to its ’20-21 national team members.

Take moguls skier Tess Johnson for instance: She put the money toward her summer lodging expenses in Park City, Utah, while she trains.

“My dad loved all sports,” Shiffrin said. “He just loved to see the work that athletes put into it, and the success they have from that work. He found it inspiring.”