Doc Rivers met Joel Embiid on the court, slapped the big man’s hand and gave him a big I-told-you-so in the waning moments of a Game 6 victory.

Rivers believed in his 76ers. Embiid, Seth Curry and even Tobias Harris came through down the stretch to reward Rivers’ faith in them and win in Atlanta.

“These guys are young, man,” Rivers said. “They need to believe that. I didn’t know if they did or didn’t. I thought they did. You can tell in the way we played. But he have another game.” 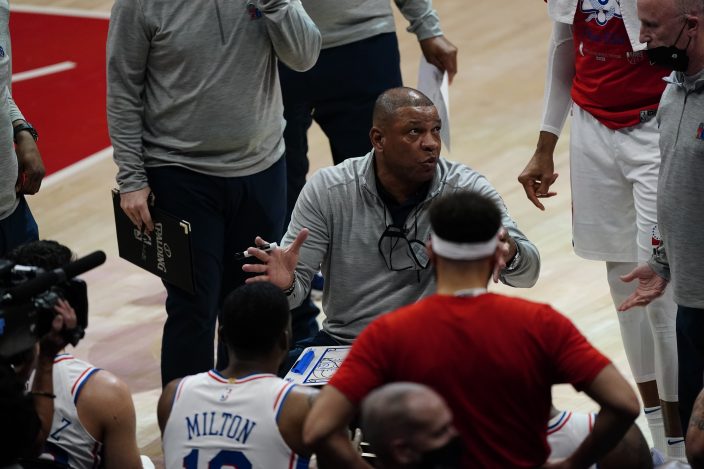 Philadelphia 76ers head coach Doc Rivers, center, talks to his players during a break in play in the first half of Game 3 of a second-round NBA basketball playoff series against the Atlanta Hawks, Friday, June 11, 2021, in Atlanta. (AP PhotoJohn Bazemore)

This Eastern Conference semifinal comes down to Game 7 Sunday in Philadelphia and there’s scant proof the home-court edge will matter much for the top-seeded Sixers.

Both games in Philly. 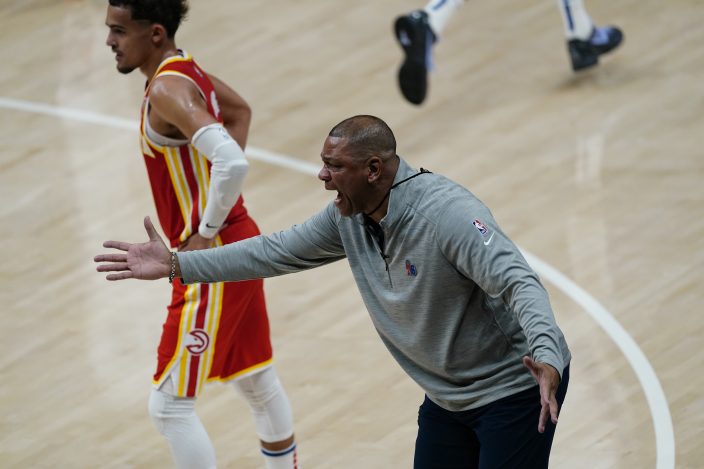 Here comes Trae Young and the Hawks back to Philadelphia, with recent road success on their side -- but the weight of Atlanta’s career 0-9 mark in Game 7s on the road against them.

“You have to look at that, the fact we have won there twice in this series,” Hawks coach Nate McMillan said Saturday. “You should feel confident you can win in that building. We’ve done well, I would say, in the playoffs on the road. I think we feel we play with confidence on the road. It’s a one-game series and the pressure is on both teams.”

The pressure, really, is just on the Sixers. Just 14-20 when the Hawks fired Lloyd Pierce on March 1, they made the playoffs for the first time since 2017 and beat the New York Knicks in five games. 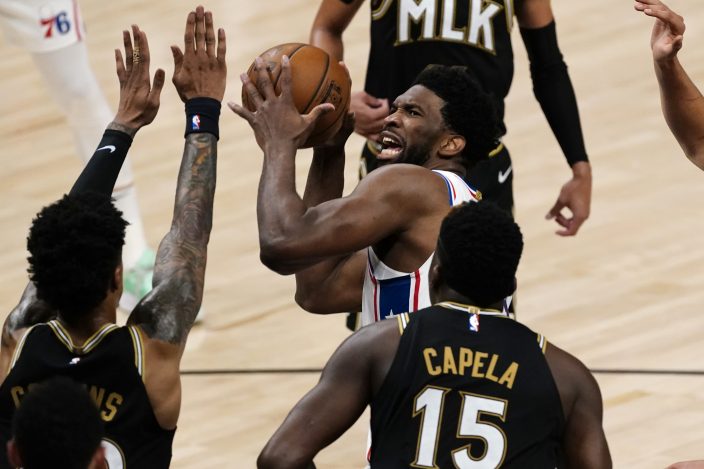 Philadelphia 76ers center Joel Embiid (21) is defended by Atlanta Hawks' John Collins (20) and Clint Capela (15) as he looks for an opening during the first half of Game 6 of an NBA basketball Eastern Conference semifinal series Friday, June 18, 2021, in Atlanta. (AP PhotoJohn Bazemore)

The Sixers have waited for this moment since they began their rebuild in 2013 and pinned their championship hopes on Embiid and fellow All-Star Ben Simmons. They were in almost the same spot two years ago when they lost Game 7 to Toronto in the East semis and Embiid left the court in tears.

Kawhi Leonard sank the first Game 7-ending buzzer-beater in NBA history for the Raptors -- and Embiid vowed the 76ers would return. 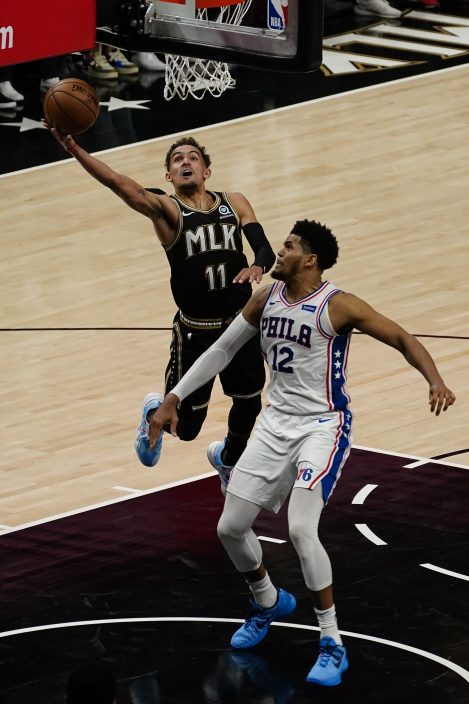 Only this time, at home.

“Even back then, I believed if we had home court, it would have been easier to win,” Embiid said. “That’s why we worked so hard in the regular season, to get that homecourt advantage.”

Yet, it mattered so little, and the Game 5 collapse is near the top of the biggest ones in Philly sports history. Harris was posted on missing persons flyers around the city following the defeat. Simmons, once a franchise centerpiece, could play his last game as a Sixer with a loss following such a small postseason.

Rivers has been forced to bench Simmons down the stretch in critical minutes because the guard can’t shoot 3-pointers (5-for-34 career) and is a liability at the foul line (24-for-71, 2021 postseason). He took only six shots in Game 6.

— NEED TO KNOW: The Sixers are trying to make the Eastern Conference finals for the first time since 2001. The Hawks made it in 2015.

— KEEP AN EYE ON: Young scored 34 points and had 12 assists in Game 6 and his penchant for scoring in the clutch -- and ignoring the Philly fans booing his every touch -- has been the biggest reason the Hawks are the surprise of the East. He’s set for his first Game 7 in about as hostile environment as he can find. But, hey, he shut up Spike Lee and the Knicks and took a bow under the MSG lights. Why not go for an encore?

— INJURY WATCH: Embiid continues to thrive playing with a cartilage tear in his right knee. ... Atlanta may be without Bogdan Bogdanovic. Bogdanovic’s status is uncertain because of a knee injury. He left the Game 6 loss in the fourth quarter with right knee soreness and did not return.

McMillan said Saturday the soreness is not related to the fracture in the same knee that forced Bogdanovic to miss 25 games early in the season.

Asked if he is optimistic Bogdanovic can return for the decisive game of the series, McMillan said: “I really don’t know or have an answer to that question. ... We’ll see how he feels later today and tomorrow.” Perhaps the most telling sign the knee was affecting the guard’s performance Friday night came when Bogdanovic missed each of two free throws early in the fourth quarter.

— PRESSURE IS ON: Simmons. The No. 1 overall pick of the 2016 draft is pl aying like a G-League r. Maybe the Sixers can get past the Hawks without a triple-double effort from Simmons, but there’s no way they get out of the East with Simmons missing free throws like some rec league player. Rivers bristled earlier in the postseason at a suggestion that Simmons should be benched in crunch time. But now -- stunningly -- the franchise is at a crossroads with their guard who has proved he can no longer be expected to play an integral role in Philly’s future championship aspirations. Game 7 is his shot to at least make a dent in this series. Play big, and Philly will love him again. Play small, and Daryl Morey can dangle an All-Star chip to a franchise willing to overlook his many weaknesses and use Simmons as a nice supporting player.