The Phoenix Suns and Los Angeles Clippers are still playing basketball deep into these NBA playoffs partly because they've learned to persevere in clutch moments without their biggest stars.

That ability could be put to the test again for both teams in the Western Conference finals.

The Suns and Clippers meet in Game 1 on Sunday in Phoenix with the status of some of their most important pieces in doubt. Suns point guard Chris Paul remains in the NBA's COVID-19 health and safety protocol while Clippers forward Kawhi Leonard is dealing with a knee injury that kept him out of the final two games of against Utah. It's not an ideal situation for either team. It's also not the time to complain about it.

“You've just got to have a mentality of next man up,” Suns forward Jae Crowder said. “We have enough in our locker room, we feel, to get the job done.”

The Suns released a short update Saturday that Paul is still in the league's health and safety protocol after initially being placed on the list Wednesday. Suns coach Monty Williams said Paul's situation was “day-to-day” and didn't elaborate on his Game 1 status. 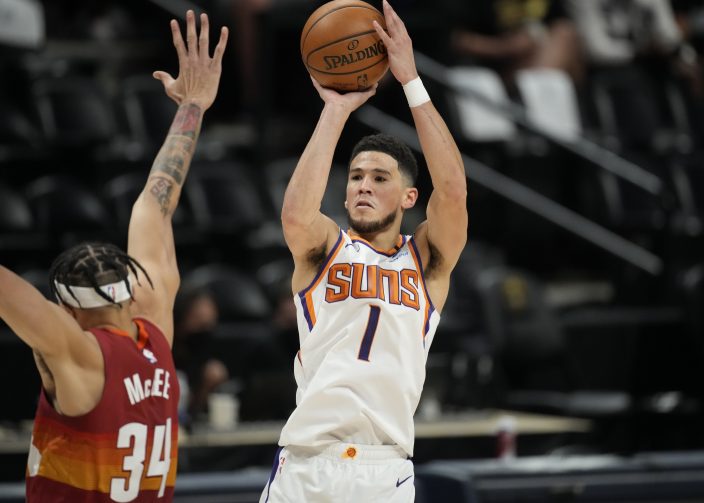 The 36-year-old point guard has been vaccinated against COVID-19, said a person with knowledge of the situation, speaking to The Associated Press on condition of anonymity because of privacy concerns. That may mean that Paul could be cleared to return more quickly than some who tested positive earlier this season before vaccines were readily available.

Leonard sprained his right knee during Monday night’s Game 4 win of the Jazz. A sprain, by definition, is a ligament injury, but the Clippers have not said which of the four knee ligaments is the cause for concern. He missed the final two games of the team's series win over the Jazz, including Friday night's Game 6.

The Clippers are 13-9 without their All-Star forward this season, including 2-0 in the playoffs. Leonard — a two-time NBA Finals MVP — is averaging 30.4 points on 57% shooting in the playoffs. 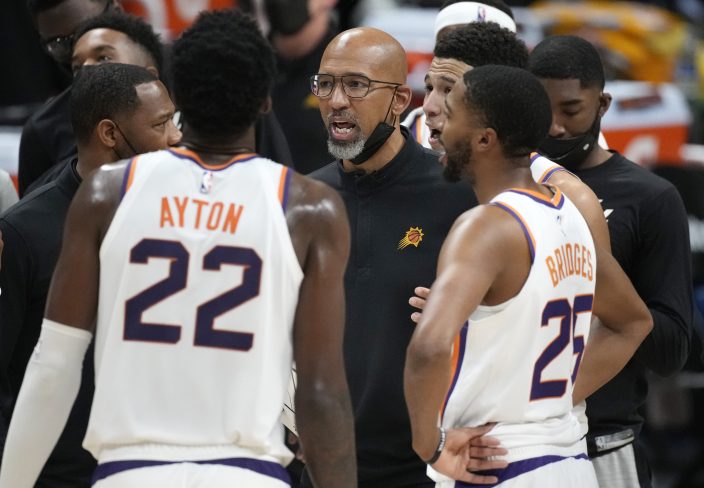 Phoenix Suns head coach Monty Williams, center, confers with players during a timeout late in the second half of Game 4 of an NBA second-round playoff series against the Denver Nuggets, Sunday, June 13, 2021, in Denver. Phoenix won 125-118 to sweep the series. (AP PhotoDavid Zalubowski)

“Our team, I just tell you, they just don’t quit,” Clippers coach Tyronn Lue said said after Friday's win. "They keep fighting and competing and I think our fans see that this year. We never gave in, never pointed a finger. Never pointed the blame on someone else. We looked in the mirror and we owned it and moved on."

Several of the Suns' best players, including guard Devin Booker and forward Deandre Ayton, are in the postseason for the first time. 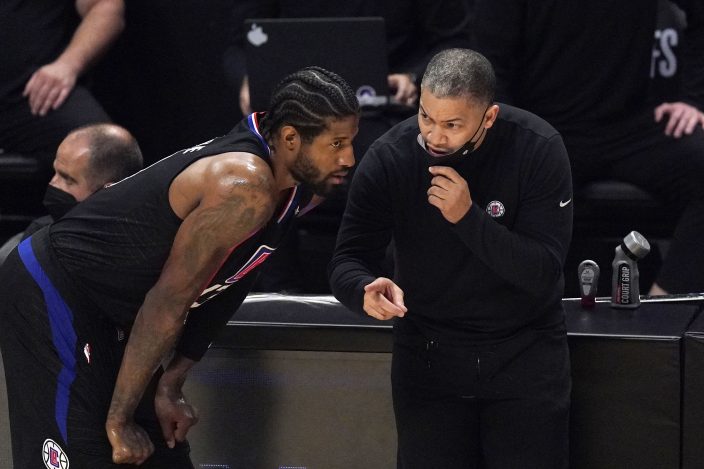 It's safe to say they haven't been intimidated.

Booker is averaging nearly 28 points in the playoffs and had one of the postseason's signature moments with 47 points in a closeout win over the defending champion Los Angeles Lakers in the first round.

“Throughout these playoffs, he's been phenomenal,” Williams said.

Ayton is averaging 15.2 points and 10.6 rebounds while shooting a remarkable 71.6% from the field. He also has provided stellar defense as the team's only true rim protector.

Terance Mann has moved into the starting lineup the past two games and has continued his breakthrough second season. Mann – a second-round selection in 2019 – scored a career-high 39 points in LA’s series-ending victory Friday night after having 13 points in Game 5.

The 6-foot-5 Mann, who can play guard and forward, is not afraid to drive to the basket but also possesses a strong perimeter shooting game. He had seven 3-pointers on Friday, becoming the third player in Clippers postseason franchise history to make at least seven 3s in a game.

If Paul isn't available for the Suns, look for backup Cameron Payne to get a boost in playing time.

The 26-year-old Payne has already shown he can make big plays in the playoffs. Paul hurt his shoulder in Game 1 of the opening round against the Lakers, which severely limited his impact for a handful of games.

The 6-foot-1 Payne picked up the slack, averaging 12.5 points against the Lakers and shooting 41% from 3-point range.

George has scored at least 28 points in the last four games and has more confidence in his shot.

George was shooting 31.7% from 3-point range in the Clippers first nine playoff games but is 15 of 34 beyond the arc in the last four games of the Utah series.

Lue was the coach when the Cleveland Cavaliers overcame a 3-1 deficit against the Golden State Warriors in the 2016 finals. With Lue leading the Clippers, LA is the first team to overcome 2-0 deficits in the same postseason and advance.

For a team that is missing its All-Star forward and rallied from a 25-point deficit on Friday night, the Clippers have emerged as a team that thrives under adversity.

“He always finds a way to talk to us so we don’t panic,” Nicolas Batum said about Lue. “A couple times, we were down 2-0, twice, and we’re down big-time like in Dallas Game 3, we’re down, I mean, big time tonight, and we lose that game and we go back to that crazy place in Utah, and he finds a way, get good guys, get a good shot and get a system. We won this game. I love that coach. You have to give him credit.”