Antoine Griezmann scored a second-half equalizer to give France a 1-1 draw with Hungary on Saturday at the European Championship.

Hungary, playing in front of a raucous crowd yet again, nearly pulled off the biggest upset of the tournament at the Puskas Arena.

After Kylian Mbappe and Karim Benzema wasted chances, Griezmann scored in the 66th minute to dampen the spirit of a crowd which gave Hungary unwavering support throughout the Group F match. 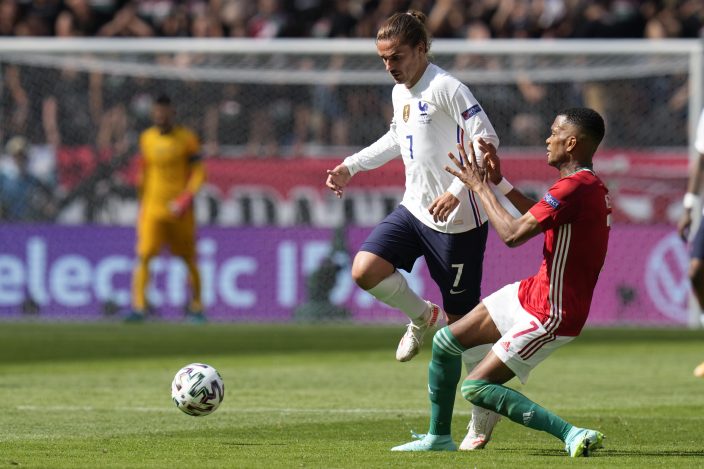 It was Griezmann’s 38th goal for France, moving him three behind third-place Michel Platini on the national team’s scoring list, and he did a little celebratory dance in front of the blue-shirted fans.

The 67,215-capacity Puskas Arena in Budapest is the only stadium at Euro 2020 to allow full crowds, and it produced an atmosphere to remember. 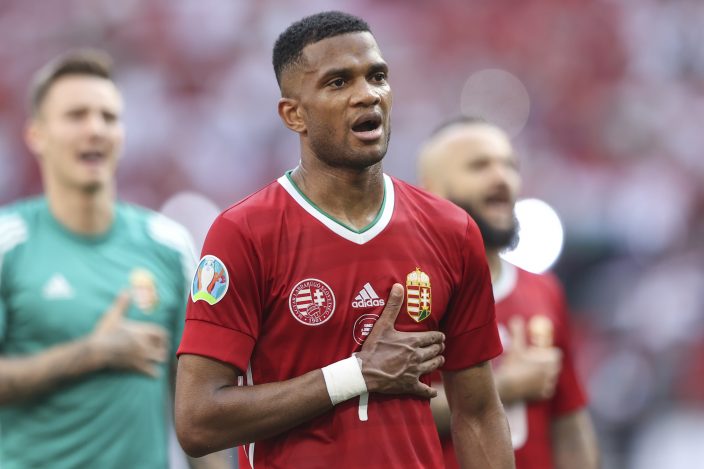 Hungary's Loic Nego celebrates with fans at the end of the Euro 2020 soccer championship group F match between Hungary and France, at the Ferenc Puskas stadium, in Budapest, Saturday, June 19, 2021. The match ended in a 1-1 draw. (Alex Pantling, Pool via AP)

Latching onto the ball after Roland Sallai won a header down the left flank, Fiola burst into the penalty area and held off defender Raphael Varane before clipping the ball into the bottom corner.

Some flares were lit and Hungary goalkeeper Peter Gulacsi had to remove paper thrown from the stands which landed in his penalty area.

The Hungarian players lined up in front of their home fans behind one goal after the match and stood with their hands on their hearts as the crowd sang. 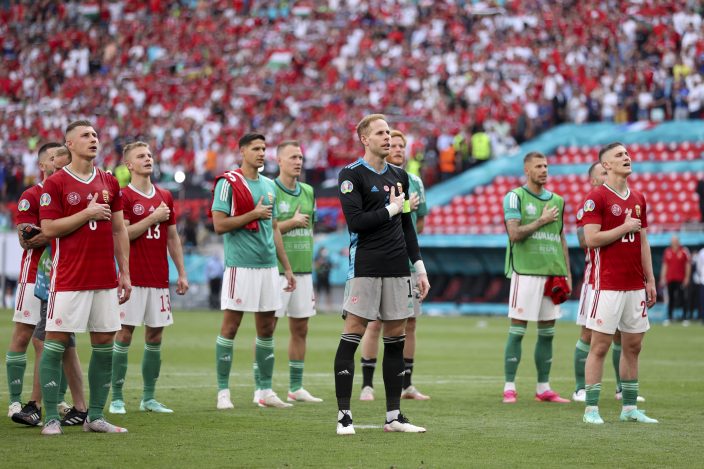 Hungary team celebrates with fans at the end of the Euro 2020 soccer championship group F match between Hungary and France, at the Ferenc Puskas stadium, in Budapest, Saturday, June 19, 2021. The match ended in a 1-1 draw. (Alex Pantling, Pool via AP)

Germany finally clicked into gear at the European Championship, with a little help from defending champion Portugal.

The Portuguese became the first team to score two own-goals in one game at the continental tournament, giving the Germans a 4-2 victory and ending fears of another group-stage exit. 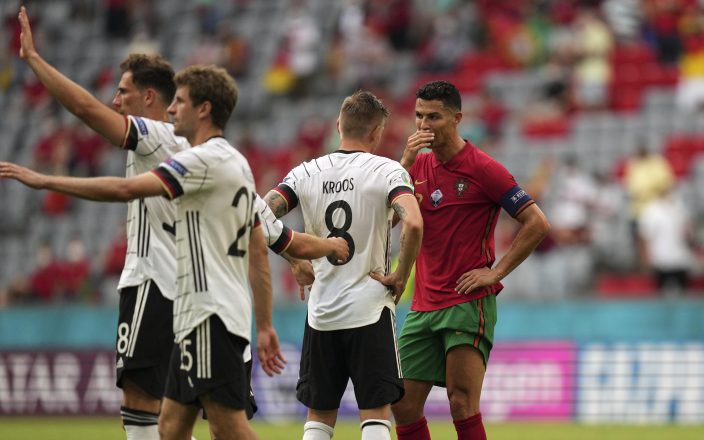 Cristiano Ronaldo put Portugal in the lead in the 15th minute against the run of play. It was his first goal against Germany and his third at Euro 2020. It also extended his all-time tournament record to 12 goals.

But defenders Rúben Dias and Raphaël Guerreiro put Germany ahead before halftime by scoring into their own net.

Kai Havertz and Robin Gosens then got two more for Germany early in the second half — becoming the first players within the squad to score at a European Championship. 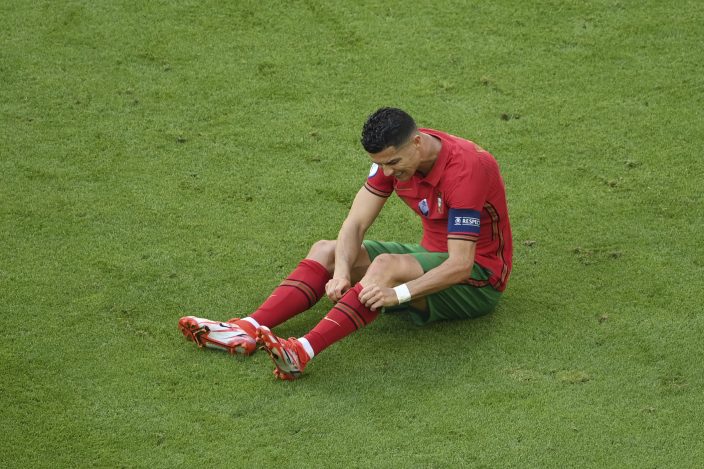 Portugal's Cristiano Ronaldo gestures after he falls to the ground during the Euro 2020 soccer championship group F match between Portugal and Germany at the football arena stadium in Munich, Saturday, June 19, 2021. (Matthias HangstPool Photo via AP)

Diogo Jota got one back for Portugal in the 67th after Ronaldo acrobatically saved a free kick from going out.

Both Portugal and Germany now have three points in Group F, one behind current World Cup champion France. Hungary has one point and will next play Germany on Wednesday in Munich. France will play Portugal in Budapest.

Robert Lewandowski helped keep Poland alive by scoring a second-half equalizer in a 1-1 draw with Spain.

Álvaro Morata ended his scoring drought by putting Spain ahead in the 25th minute but Lewandowski evened things in the 54th with a header for only his third goal with the national team at a major tournament.

Spain striker Gerard Moreno missed a penalty kick shortly after Lewandowski’s goal and Morata then missed an open net after after the ball rebounded off the post.

The result leaves Sweden at the top of Group E with four points after its win over Slovakia on Friday. Slovakia is second with three points while Spain has two. Poland still has a chance of advancing at Euro 2020 despite being last in the group with one point.