Kim's homer off the Western Metal Supply Co. Building in the left field corner sent Petco Park into a frenzy on a wild day that included Tatis getting hurt again and Reds star Joey Votto and manager David Bell getting ejected in a wild scene in the first inning.

Tatis left after apparently hurting his left shoulder diving for Tyler Naquin's RBI single in the fifth. He was replaced by Kim, a rookie from South Korea. 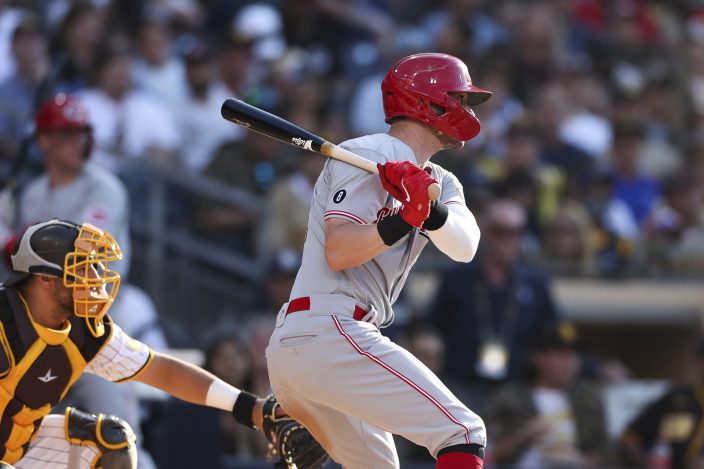 San Diego will go for a four-game sweep on Sunday. The Padres entered the series after losing 13 of 17 games. The Reds came in on a six-game winning streak.

Tatis left after diving to his right for Naquin's single in the three-run fifth, when the Reds tied it at 5. Tatis extended his left arm as he landed and immediately reached for his shoulder, which he partially dislocated taking a violent swing against San Francisco on April 5. That injury landed him on the 10-day injured list.

Tatis was immediately checked by an athletic trainer as manager Jayce Tingler came out to make a pitching change. Tingler then checked on Tatis, who was in obvious discomfort as he left the game.

Tatis left a spring training game after hurting the shoulder while making a throw but was back two days later.

The electrifying Tatis signed the longest contract in baseball history in February, for 14 years and $340 million.

Votto and Bell were ejected in the first inning. Catcher Webster Rivas appealed after Votto offered at the high, outside pitch from Miguel Díaz, and third base umpire Chris Guccione confirmed Votto went around.

Votto was unhappy and began arguing, and Bell came out of the dugout and joined the argument. Bell and coaches Delino DeShields and Freddie Benavides had to keep Votto away from plate umpire Ryan Additon, who then apparently ejected the player and manager at the same time.

Votto had to be restrained as he continued to argue. Shortly after Votto went to the dugout, the fan was ejected. Bell came back out on the field to continue arguing before leaving the game.

The Padres took a 5-2 lead when Manny Machado hit a bases-loaded double into the left field corner with two outs in the fourth.

But the Reds tied it in the fifth, when they broke through against 28-year-old rookie Daniel Camarena after the local product had thrown two impressive innings in his big league debut.

Rookie Jonathan Indian and Jesse Winker opened the fifth with singles before Camarena got two outs. Tatis was hurt diving for Naquin's RBI single, which chased Camarena. James Norwood came on and walked Tyler Stephenson before Eugenio Suárez hit a two-run single to tie it.

Jake Cronenworth hit a tying, two-run homer in the third for the Padres, his eighth.

Camarena, who went to San Diego’s Cathedral Catholic High, retired six of the first eight batters he faced. He retired the side in the third, including baseball’s two hottest hitters, Winker and Nick Castellanos. After putting runners on the corners with no outs in the fourth, he again retired the side.