Raúl Ruidíaz scored the tiebreaking goal early in the second half, and the Seattle Sounders extended the longest unbeaten start to a season in team history with a 2-1 victory over the LA Galaxy on Saturday night.

Yeimar Gómez Andrade also scored as the MLS-leading Sounders overcame an early deficit and improved to 6-0-3, matching the eighth-longest unbeaten start in league history. The Galaxy set the MLS record in 1996 with a 12-0 start.

Sacha Kljestan converted a penalty in the first half for the Galaxy, who couldn't convert numerous chances to even it in the waning minutes. LA dropped to 5-3-0, with two of its losses against the Sounders. 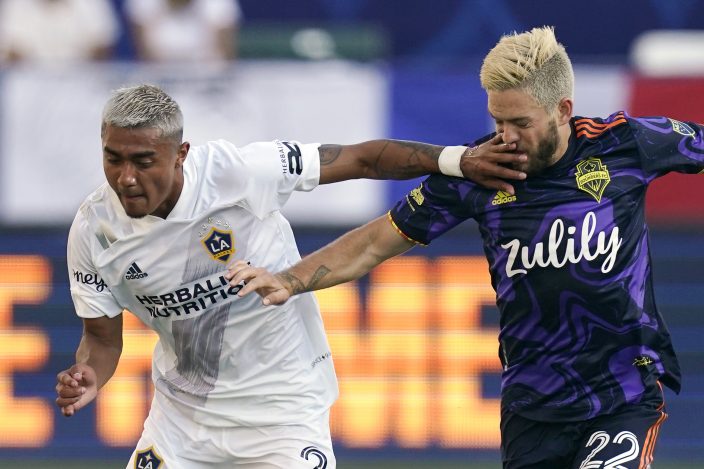 LA Galaxy defender Julian Araujo, left, hits Seattle Sounders midfielder Kelyn Rowe in the face as they battle for the ball during the first half of a Major League Soccer match Saturday, June 19, 2021, in Carson, Calif. (AP PhotoMark J. Terrill)

Ruidíaz's seventh goal of the season came in Seattle's first game after the star forward was surprisingly left off Peru's roster for the Copa America tournament. He also pulled even with LA's Javier Hernández for the overall MLS scoring lead when Chicharito was shut out for his third straight game.

The Sounders improved to 7-1-5 in their last 13 meetings with the Galaxy since 2016. Seattle also beat LA twice in a season for just the second time in the rivalry's history.

The Galaxy’s loss disappointed most of the 23,165 fans in their first full-capacity crowd since the start of the coronavirus pandemic. 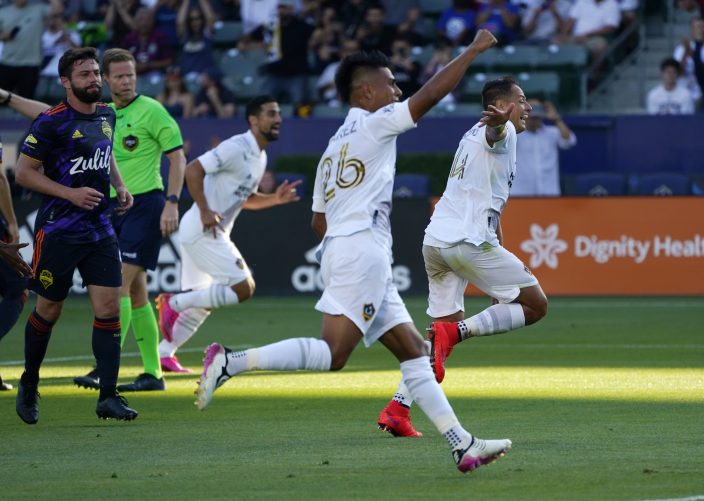 The Galaxy played without captain Jonathan Dos Santos, who has a calf strain. LA then lost defender Daniel Steres to an injury in the opening minutes, but still took the lead when Chicharito drew a penalty from a foul by João Paulo.

Kljestan coolly converted in the 21st minute for the veteran's second goal of the season.

But Seattle evened it on Gómez Andrade's header late in the first half, and the Sounders went ahead right after the break with more pressure and fortunate ball luck. A bouncing throw-in eventually led to a rebound goal by Ruidíaz after goalkeeper Jonathan Bond made an initial save. French defender Séga Coulibaly made his Galaxy debut nearly two months after signing with his first MLS club, with his move from Nancy delayed by immigration paperwork.