Antoine Griezmann scored a goal at the European Championship, and now he's expecting teammate Karim Benzema to score one, too.

Benzema missed a straightforward chance on Saturday in France’s 1-1 draw against Hungary with the score 0-0. The Hungarian team scored not long after and Griezmann equalized for Les Bleus midway through the second half.

Benzema netted 30 goals for Real Madrid this season but has drawn a blank in four appearances since returning to the national team. He has not yet scored in the competition after failing to find the net at Euro 2008 and Euro 2012. 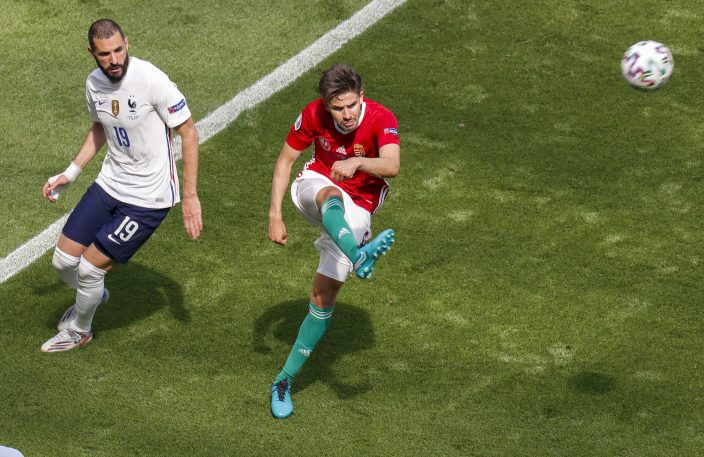 “I wouldn’t say he’s doubting himself. But as a forward you do need to score to feel free within yourself," Griezmann said Sunday. "I think that once he scores the tap will be open and the water will start flowing. We’re all behind him and he knows that he has our support.”

Griezmann thinks it would be far worse if Benzema was not in scoring positions.

“He’s getting chances, so a goal can come at any time,” Griezmann said. “It would be worrying if he didn’t get any chances, but that’s not the case.”

Kylian Mbappe also hasn't scored at Euro 2020, though he did get a goal in a friendly match shortly before the tournament. The France forward fluffed a header in the first half against Hungary, failing to even hit the target when unmarked.

“What every forward needs at the start of the competition is to score that first goal. The sooner it happens the better for everyone,” Griezmann said. “They’ve had chances, Kylian and Karim. As soon as one goes in then things will take care of themselves. We just have to be patient.”

France beat Germany 1-0 on Tuesday, with Mats Hummels scoring an own-goal, and leads Group F with four points, one more than Portugal and Germany.

Portugal great Cristiano Ronaldo is having no trouble scoring and shares the tournament lead with Czech Republic forward Patrik Schick. Both have three goals from two games.

“What he’s doing is exceptional. He can score with his left foot, right foot, headers,” said Griezmann, who plays at Barcelona with Lionel Messi. “We’re probably not going to the see likes of Leo and him again. It’s a privilege to play with them and against them.”