Hungary may play its final group game at the European Championship in a stadium lit up in rainbow colors.

Munich Mayor Dieter Reiter said Sunday he was going to write to UEFA to ask for permission for Germany’s stadium to be lit up with the colors as a sign against homophobia and intolerance when the team plays Hungary on Wednesday.

“This is an important sign of tolerance and equality,” Reiter told news agency dpa. 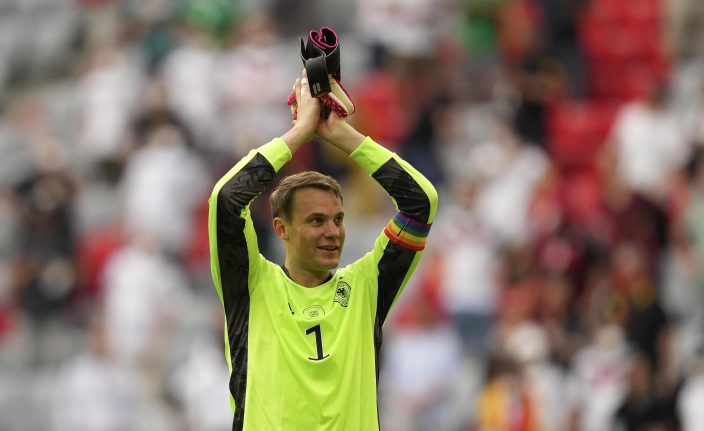 Munich’s city council had already called for the stadium to be lit in rainbow colors for the final Euro 2020 group game to protest a law passed by Hungarian lawmakers on Tuesday that prohibits sharing with minors any content portraying homosexuality or sex reassignment. The law has been denounced as anti-LGBT discrimination by human rights groups.

“It is important for the state capital Munich to set a visible sign of solidarity with the LGBTI community in Hungary, which is suffering from the current stricter homophobic and transphobic legislation of the Hungarian government,” the Munich council said in its application.

UEFA, as organizers of the event, will have the final say.

The Munich city council accused Hungary “of following the example of Russia’s homophobic and transphobic legislation."

"This legislation represents a new mark in the invisibility and disenfranchisement of lesbians, gays, bisexual, transgender and intersex people (LGBTI) and adds to the systematic restriction of the rule of law and fundamental freedoms that have been practiced for years in Hungary,” the council said.

Germany captain Manuel Neuer has already worn an armband in rainbow colors for his team’s opening group games against France and Portugal.

The council said Munich “is committed to diversity, tolerance and equality in sport and in society as a whole.”

But not everyone agrees.

Uwe Junge, a politician with the far right AfD party, was chastised by party leader Alice Weidel for "going too far” with a since-deleted post on Twitter in which he used a homophobic slur to describe Neuer's rainbow armband.

The Munich stadium was previously lit in rainbow colors on the night of July 9, 2016, to celebrate Christopher Street Day.