A struggle for power and strong mistrust is at the heart of the fight between Lebanese political leaders and the deadlock over government formation, the European Union’s foreign policy chief said Sunday.

“It is clear a fight for the distribution of power and I have to say there is also strong mistrust,” Josep Borrell told a group of reporters before leaving Beirut. “It is difficult to get an agreement between people that don’t trust each other."

A power struggle has emerged between premier-designate Saad Hariri, named to the post in October, one one side, and President Michel Aoun and his son-in-law Gebran Bassil, who heads the largest bloc in parliament, on the other. The top leaders locked horns over the shape of the government while the country's economic problems, unfolding since late 2019, worsened. 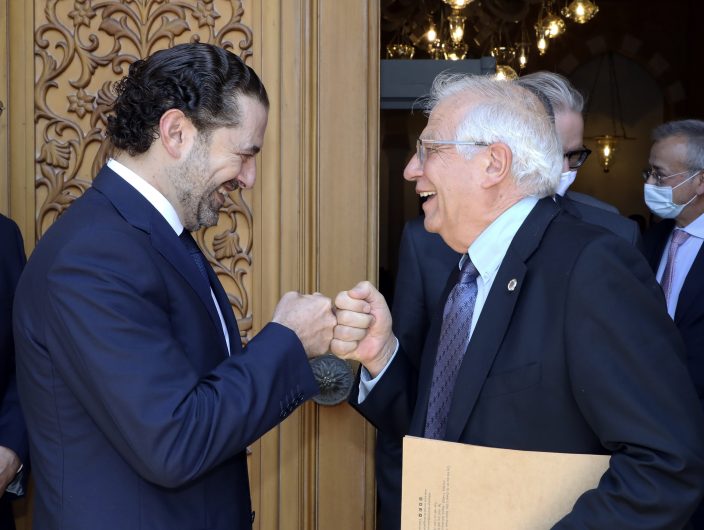 The European Union foreign policy chief was in Lebanon for two days where he met with political, security and military leaders. He delivered a strong message that forming a government is a matter of urgency as the small country is on the verge of total financial collapse.

Lebanon’s economy has contracted by over 20% in 2020, poverty has deepened with more than 55% of the population living below the poverty line. The national currency has tumbled, losing nearly 90% of its value to the dollar. Blamed on decades of corruption and mismanagement, the World Bank said Lebanon's crisis is likely to rank as one of the worst the world has seen in more than 150 years.

Borrell said European countries are considering sanctions against Lebanese politicians, who he blamed for obstructing the formation of a government. Borrell said the make-up of the new government must be agreed upon by the president and the prime-minister designate Saad Hariri. Aside from technical capabilities, it must have the political support it needs to operate in such difficult conditions, he added.

Borrell said a new government could then reach a deal with the International Monetary Fund, which would then facilitate European Union assistance.

“A ship in the middle of a storm needs a captain... It needs officers of different departments of the ship. If not the ship will sink,” Borrell said. “You need a government with technical capacities and political support to implement the decisions, take decisions, and these decisions will not be easy to take.”

Lebanese media have reported that France and the EU are putting together proposals for possible travel bans and freezes on assets of some politicians.

Borrell said the sanctions are one way, but not the only way, to exert political pressure on Lebanese politicians to get an agreement.

"I am very much afraid that the crisis will be producing very negative effects on the stability of the country.

Lebanon defaulted on paying back its debt for the first time in March, while talks with the International Monetary Fund on a bailout package stopped last year. The crisis has been the biggest threat to Lebanon’s stability since the 1975-90 civil war ended.

Pharmacies, gas stations close due to shortages in Lebanon

Lebanese acting FM steps down over remarks on Gulf Arabs, IS

Protests around Lebanon as local currency continues to slide