The New York Yankees turned their record-tying third triple play of the season to strand the go-ahead run in the ninth inning, bailing out closer Aroldis Chapman in a shaky outing and closing down a 2-1 win over the Oakland Athletics on Sunday.

Gary Sánchez spoiled Sean Manaea's gem with a go-ahead two-run double in the sixth inning, and Jonathan Loaisiga (7-2) and Lucas Luetge turned a 2-1 lead over to Chapman in the ninth.

A night after reaching 103.4 mph during his 15th save — his fastest pitch on a strikeout since the 2017 AL wild-card game — Chapman walked Jed Lowrie and Chad Pinder on nine pitches, topping out at 98 mph.

New York Yankees Gary Sanchez (24) and Oakland Athletics third baseman Matt Chapman (26) look toward the third base umpire after Sanchez advanced to third but overran the base on a throw home after hitting a two-run double during the sixth inning of a baseball game, Sunday, June 20, 2021, at Yankee Stadium in New York. Sanchez was safe after a review.(AP PhotoKathy Willens)

He was visited by an athletic trainer for a fingernail issue on his pitching hand but stayed in the game to face Sean Murphy, who drilled the second pitch of the at-bat right at third baseman Gio Urshela.

Urshela stepped on third and whizzed the ball to DJ LeMahieu, and the second baseman relayed the ball to first to get Murphy by a step. 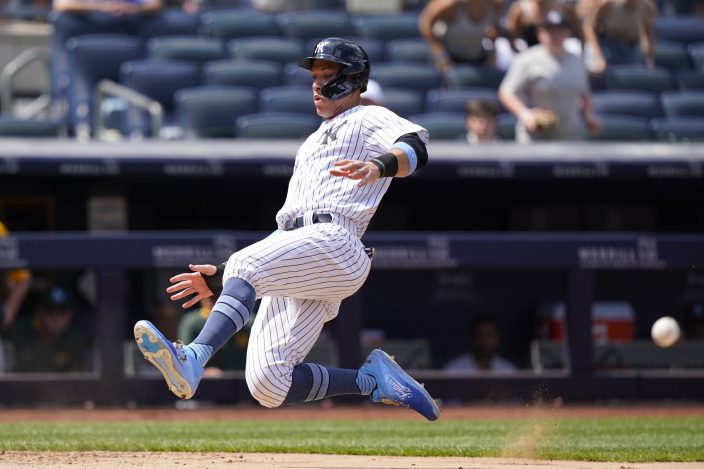 New York Yankees' Aaron Judge heads home while trying to beat the throw to the plate on Gary Sanchez's two-run double during the sixth inning of a baseball game against the Oakland Athletics, Sunday, June 20, 2021, at Yankee Stadium in New York. (AP PhotoKathy Willens)

Chapman's 16th save in 18 tries sent Oakland to its first road series loss this season after eight wins and a split.

Manaea struck out a career-high 11 and Matt Olson homered for Oakland, but the A's dropped their second straight after ending a seven-game winning streak Saturday. 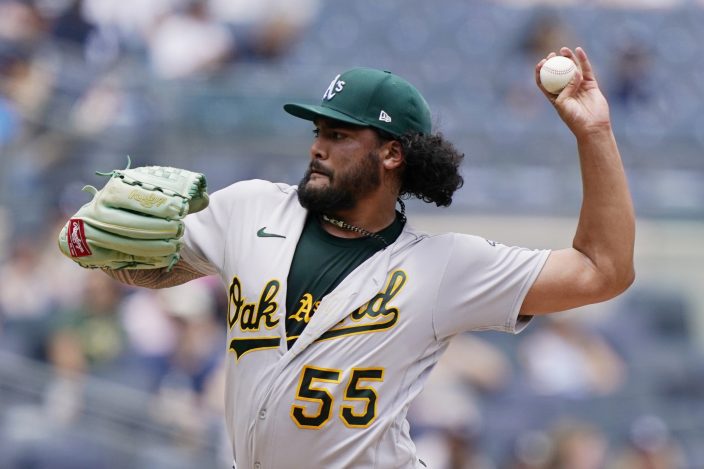 Manaea — a winner in three straight starts — cruised until the sixth, when he walked two batters ahead of the red-hot Sánchez.

Sánchez lined his second double of the game into the right-center gap, scoring both runners for a 2-1 lead.

The slow-footed Sánchez got hung up between second and third on the play but juked around a tag attempt from A's third baseman Matt Chapman before diving to get a hand onto the bag. 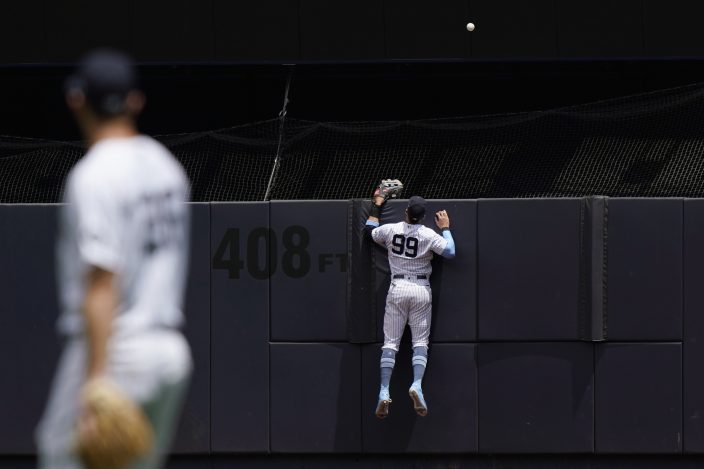 Yankee Stadium roared, groaned and roared again on the roller coaster play, then let out another ovation when umpires upheld the safe call on replay review.

A two-time All-Star, Sánchez lost his starting job during last year's postseason due to an extended slump, one that stretched into the start of 2021. He's surged back to top form in June, entering Sunday hitting .294 with a 1.012 OPS this month. He has five homers in his past 10 games, and 11 of his past 17 hits have gone for extra bases.

Sergio Romo relieved Manaea after Sánchez's double and got out of the inning. 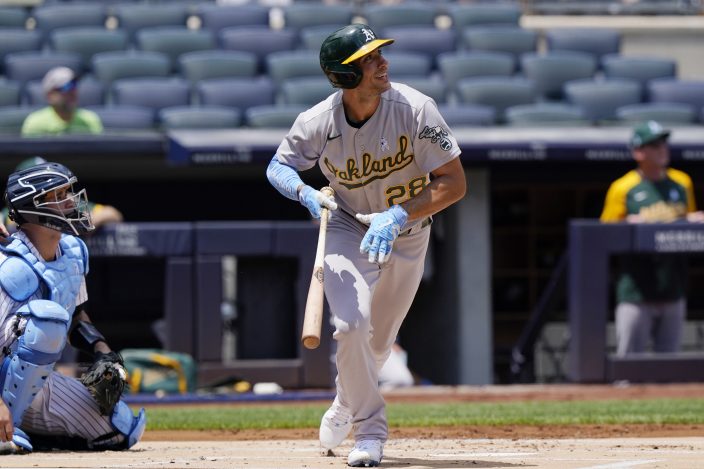 Manaea — throwing exclusively fastballs and changeups — dominated New York for most of his 5 1/3 innings. He was charged with two runs on three hits and two walks.

The left-hander had 20 swings and misses on his sinker, the most by a pitcher with a two-seam fastball or sinker in a game since at least 2008 when pitch tracking began.

Olson hit his 20th homer in the first inning, jumping on Montgomery's 1-0 fastball for a solo shot to center field.

Montgomery pitched through the fifth without further damage but ran into trouble in the sixth, walking leadoff hitter Mark Canha and allowing a one-out single to Olson. Loaisiga relieved and got two groundouts to keep New York within 1-0.

Chapman hit a one-out triple in the eighth but was stranded when left-hander Lucas Luetge struck out Olson and got a lineout from Ramón Laureano.