The New York Yankees turned their record-tying third triple play this season to strand the go-ahead run in the ninth inning, bailing out closer Aroldis Chapman and closing down a 2-1 win over the Oakland Athletics on Sunday.

Gary Sánchez spoiled Sean Manaea’s gem with a go-ahead two-run double in the sixth inning, and Jonathan Loaisiga (7-2) and Lucas Luetge turned a 2-1 lead over to Chapman.

Jed Lowrie and Chad Pinder walked, and Sean Murphy grounded to Gio Urshela, who stepped on third and threw to DJ LeMahieu. The second baseman relayed the ball to first to get Murphy by a step. 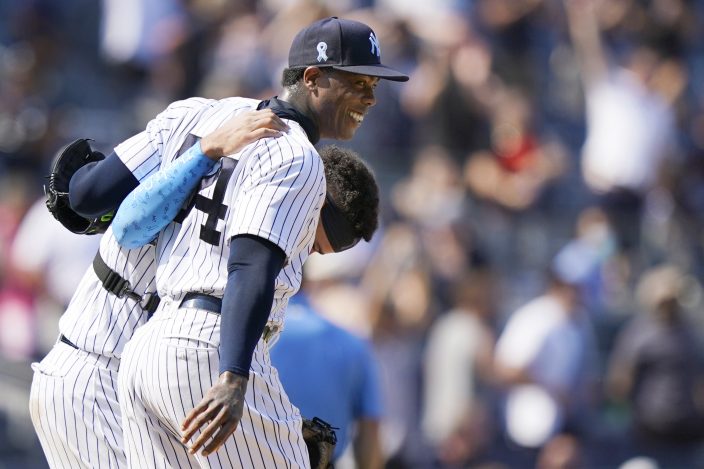 New York also turned a triple play Thursday in Buffalo against the Blue Jays and also had one May 21 against the Chicago White Sox. Chapman’s 16th save sent Oakland to its first road series loss this season after eight wins and a split.

Reese McGuire had three doubles during a four-hit performance. 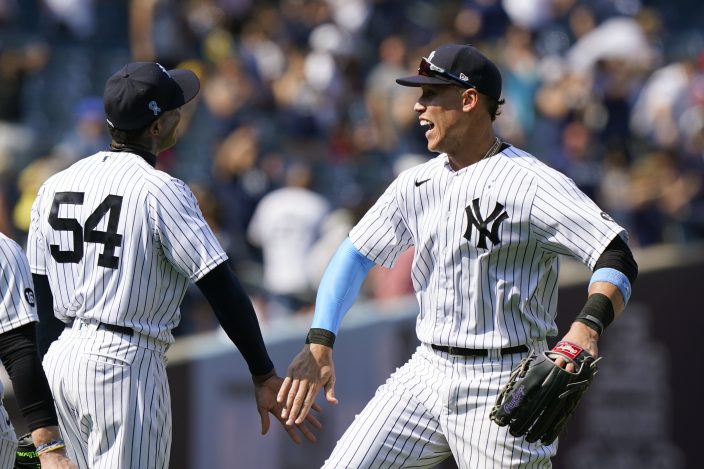 Hyun Jin Ryu (6-4) gave up one run and three hits in seven innings, retiring 17 of his last 18 batters, and Tyler Chatwood handled the ninth for his first save since 2019.

Trey Mancini homered twice for Baltimore, which has dropped 10 of its last 11 and is an

Kyle Schwarber homered three times and tied a major league record with five in a two-game span, and Washington took three of four.

Schwarber set a Nationals/Montreal Expos record by homering nine times in a 10-game span, increasing his total to 18 this season with his first career three homer-game.

Fan favorite Gerardo Parra doubled in his return to the Nationals, his “Baby Shark” walkup music preceding his pinch-hit appearance.

Josh Naylor foiled Pittsburgh’s strategy with an RBI single in the seventh off Chasen Shreve, who had relieved starter JT Brubaker (4-6),

James Karinchak struck out Colin Moran looking, stranding Kevin Newman at second in the ninth for his eighth save. Cleveland avoided a three-game sweep by the Pirates,

Jacob Stallings tied it 1-all with a two-out single off Phil Maton (2-0) in the sixth.

Adam Wainwright (5-5) struck out 11 and pitched a three-hitter for his 26th complete game in the opener of a day-night doubleheader.

Nolan Arenado hit a two-run homer off Bryse Wilson (2-3) in the first and Paul Goldschmidt added a three-run shot off Josh Tomlin in the fifth of the seven-inning game.

The Braves, who play another doubleheader Monday at the New York Mets, have dropped seven of 10.