A look at what's happening around the majors on Monday: 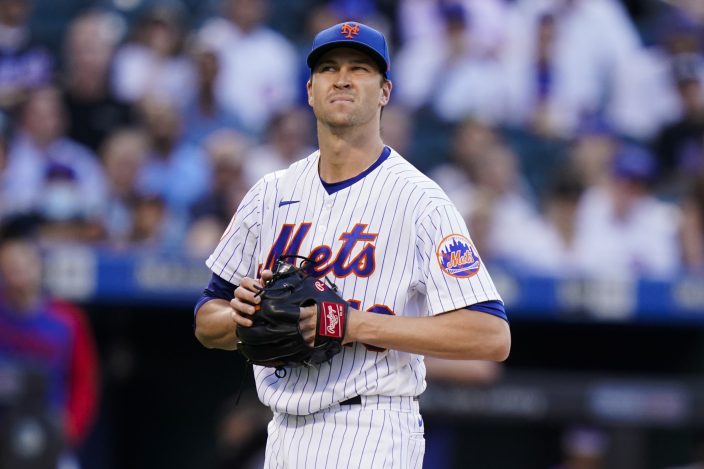 Yankees ace Gerrit Cole isn’t sure what to expect.

“I think I’m in the same boat as everyone else, just waiting for this to play out,” he said.

Pitchers will be ejected and suspended for 10 games if caught using foreign substances to doctor baseballs. Such grip aids — ranging from a tacky mix of rosin and sunscreen to heavy duty concoctions designed for use in strongman competitions — have long been illegal, but the ban has rarely been enforced.

Umps will check all starters multiple times and all relievers either at the end of his first inning or when removed, whichever occurs first. Caps, gloves and fingertips will be checked.

“It definitely will be probably a little awkward,” Cubs manager David Ross said. “But we’ll get through it, adjust.”

ALL EYES ON JAKE

Jacob deGrom is still listed as a probable starter in a doubleheader against Atlanta and no doubt Mets management, players and fans will be closely watching every pitch the New York ace throws after recent health scares.

The two-time NL Cy Young Award is having a historically dominant season, with an 0.54 ERA and 111 strikeouts in 67 innings, going 6-2 in 11 starts.

But deGrom exited his last start after three perfect innings because of a sore right shoulder, which he might have aggravated taking a swing. In his previous outing, he was pulled after six innings with flexor tendinitis in his pitching arm.

Medical tests haven’t revealed anything significant and deGrom says he feels fine to face the Braves at Citi Field. Plenty of outsiders, naturally, have been pleading for the Mets to give deGrom an extended break.

DeGrom, who turned 33 on Saturday, has been a two-way star for the NL East leaders. He’s batting .423 with six RBIs -- he’s allowed only four earned runs this year.

The Diamondbacks have lost a team-record 17 in a row and are nearing the majors’ worst skid of the wild-card era.

Despite RBI hits by Christian Walker and Ketel Marte during a late rally, Arizona lost to the Dodgers 9-8 on Sunday. The Diamondbacks have dropped 30 of 32 and 40 of 45, and have the worst record in the majors at 20-53.

Kansas City lost 19 straight in 2005, the longest drought since baseball began having wild-card playoff teams in 1995.

Merrill Kelly (2-7, 5.40 ERA) starts for Arizona to begin a three-game series at Chase Field against Milwaukee. The Diamondbacks then head to San Diego, hoping to end a major league-record 23-game road losing streak.

Tampa Bay infielder Wander Franco, considered the best prospect in the minors, is on deck to make his big league debut.

The Rays say they plan to promote the 20-year-old Franco from Triple-A Durham on Tuesday. Tampa Bay is off Monday and hosts the Red Sox on Tuesday night.

Franco is a .332 hitter with 145 RBIs in three minor league seasons.

The Rays had the best record in the majors this year until their current six-game losing streak.