Trae Young and the Hawks are taking their stunning turnaround to the Eastern Conference finals.

Young made a late 3-pointer and scored 21 points to help Atlanta win for the third time in the series in Philadelphia, a 103-96 victory over the top-seeded 76ers on Sunday night in Game 7.

The Hawks will open their first East finals since 2015 against the Bucks on Wednesday night in Milwaukee. 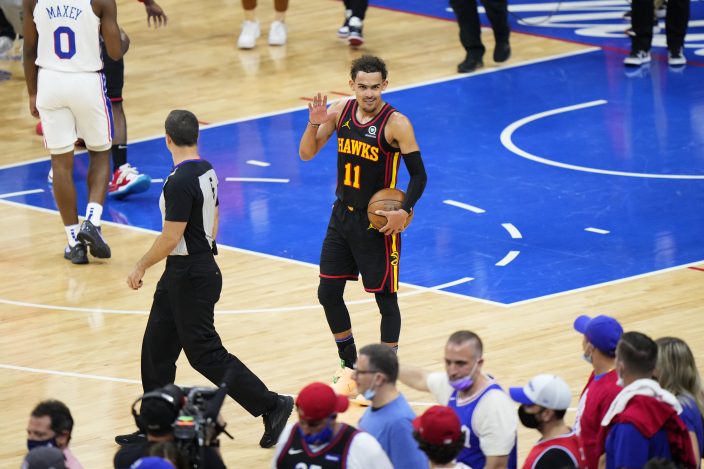 “This team is special, man,” Kevin Huerter said. "Everybody has counted us out all year. For us to make it this far and win in this building in Game 7, it’s huge for us.”

But the Hawks ignored their ignominious history and got one in Philly, where they already won in Game 1 and Game 5 and knocked out Joel Embiid, Ben Simmons and closed the book on the Process. 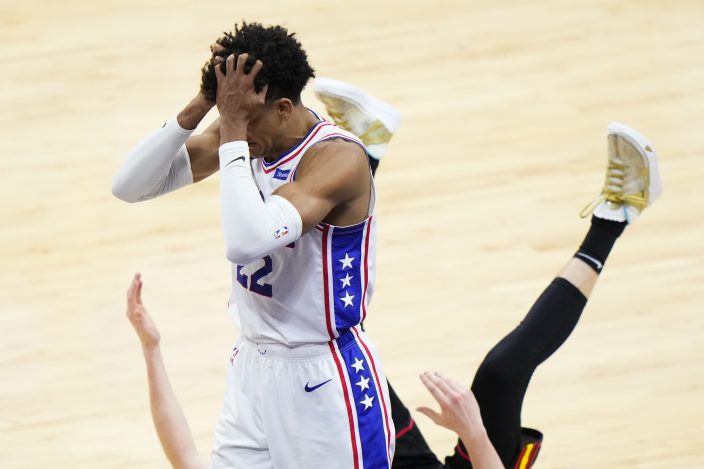 Not so deep down, not even the Hawks could have seen this coming, especially in March when they were 14-20, 11th in the Eastern Conference and fired coach Lloyd Pierce.

Under coach Nate McMillan, the Hawks turned into birds of prey and Young led a charge into the postseason for the first time since 2017 that kept rolling with a first-round win over New York.

Embiid, the NBA MVP runner-up, Simmons and a high-priced cast of stars were supposed to put the upstart Hawks in their place. It never happened. 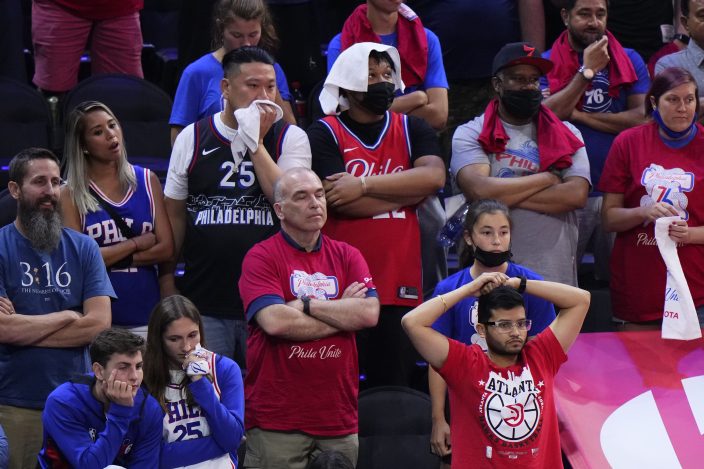 Huerter, who led the Hawks with 27 points, sealed the win with three free throws and the packed house of 18,624 fell as silent as it was when the season opened without any fans.

Sixers fans let the home team have it and booed them off the court and were reprimanded by the public address announcer for throwing trash on the court. 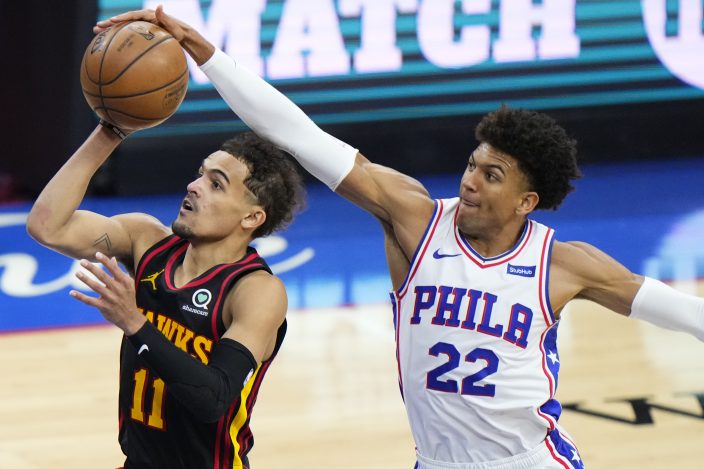 This marked only the second year since 1973 — when the NBA began seeding for the playoffs by conference — when neither No. 1 seed will make the conference finals. West No. 1 seed Utah was eliminated by the Clippers.

Philly was on edge — the public address announcer even noted “it’s a little quiet in here” — having seen two losses in this series already. Playing for the season, Rivers played four reserves over the final minutes of the third that produced little offense and little faith the Sixers could keep pace. Embiid returned but promplty had a pass picked off by Lou Williams for a fastbreak dunk and the Hawks closed the third with a 76-71 lead. The Sixers had 17 turnovers. 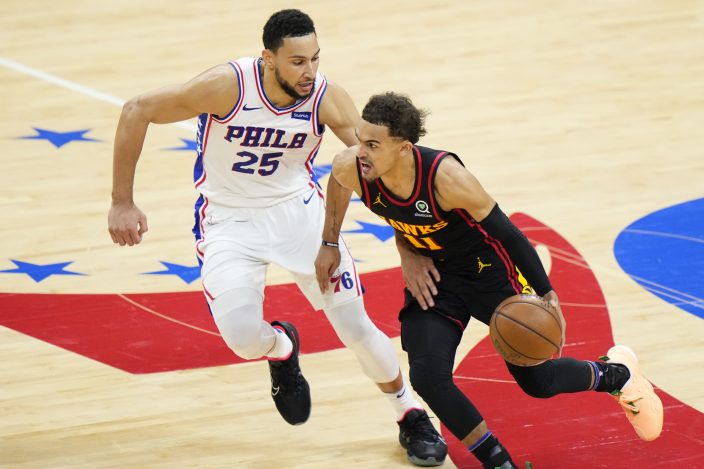 Atlanta Hawks' Trae Young, right, tries to get past Philadelphia 76ers' Ben Simmons during the second half of Game 7 in a second-round NBA basketball playoff series, Sunday, June 20, 2021, in Philadelphia. (AP PhotoMatt Slocum)

Rattled by Game 7 and a packed house on the road? Not these Hawks, who took a 26-point lead in a Game 1 victory in Philly and then rallied from 26 down on the same court to pull out Game 5.

No matter. Huerter and John Collins picked up the slack and Danilo Gallinari hit consecutive 3s -- one of an Embiid turnover -- to send the Hawks into halftime with a 48-46 lead. 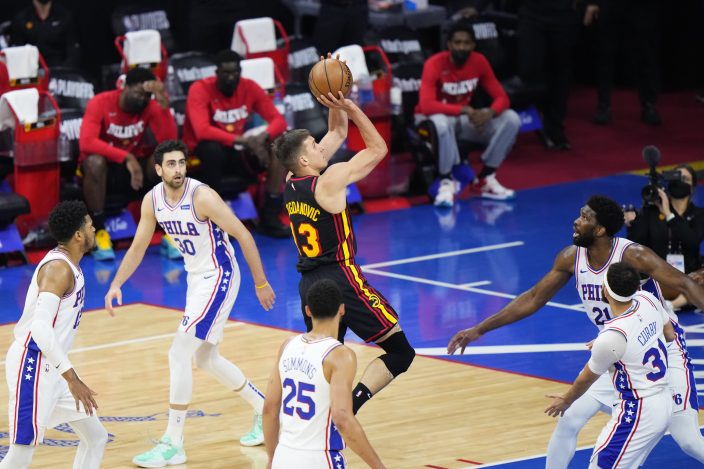 Atlanta Hawks' Bogdan Bogdanovic (13) goes up for a shot during the first half of Game 7 in a second-round NBA basketball playoff series against the Philadelphia 76ers, Sunday, June 20, 2021, in Philadelphia. (AP PhotoMatt Slocum)

The Sixers had 10 turnovers in the half and again, Embiid and Curry showed the only signs of life for the offense. Simmons could be playing his way out of Philly with a postseason to forget. The All-Star guard was whistled for his third foul with 25.9 seconds in the first half and took only two shots. The embattled guard had vowed all series he would return to an aggressive style but instead was invisible on offense.

He picked up his fourth foul moments into the third quarter.

Rivers said before the game there were two big keys to winning Game 7. 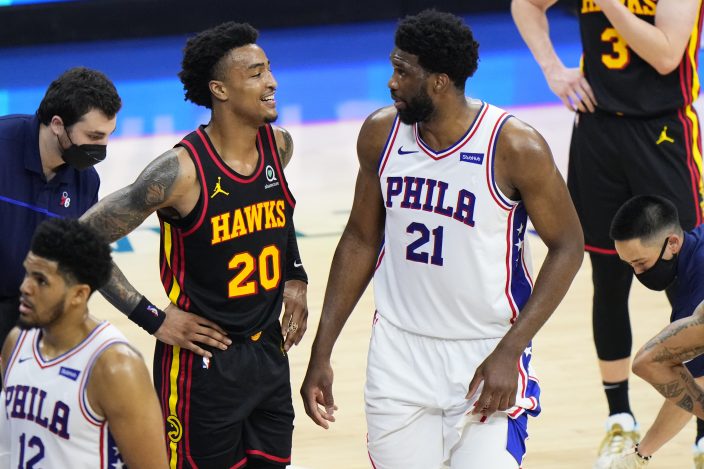 “Execution for sure, and trust at the end of the day,” he said. “Trusting what you’ve done all day and not getting away from it.”

The Sixers strayed for what got them this far and now they head into an early offseason with a summer full of questions.

76ers: Embiid was fined $35,000 by the NBA for escalating an on-court altercation in Game 6. The NBA said Embiid also failed to comply with an NBA Security interview following the on-court incident. .. Ryan Howard, Brian Westbrook and Bernie Parent rang the ceremonial bell.