Nicolas Roy converted his own rebound 1:18 into overtime and the Vegas Golden Knights rallied to a 2-1 win over the Montreal Canadien on Sunday nights, tying the Stanley Cup semifinal playoff series at 2-all.

Robin Lehner got the start in place of Marc-Andre Fleury and stopped 27 shots, and Brayden McNabb also scored for Vegas. The Golden Knights turned the tables in Game 4 by rallying from a one-goal deficit two days after blowing two one-goal leads in a 3-2 overtime loss.

Game 5 is Tuesday night at Vegas. 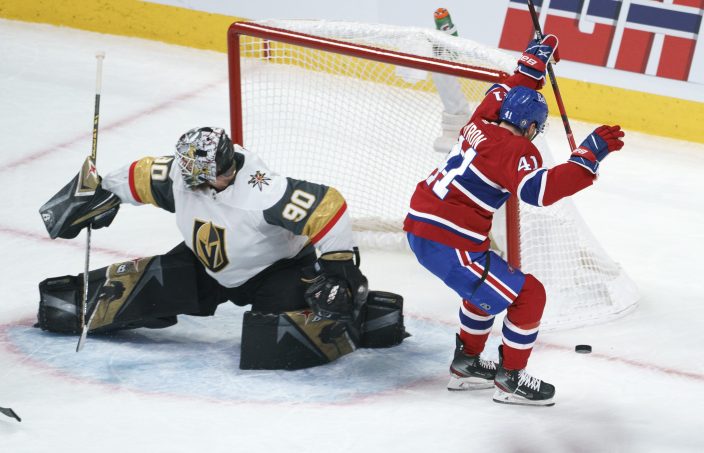 Paul Byron scored on a breakaway with 1:05 left in the second period, and Carey Price stopped 17 shots. Montreal had won its previous four overtime games this postseason, and five straight dating to a 3-2 win against Pittsburgh in a preliminary round series last summer.

Former Canadiens captain Max Pacioretty — the target of a booing Montreal crowd — played a key role in setting up the decisive score. Pacioretty got a shot off by spinning around in the left circle, only to be stopped by Price.

The rebound went directly to Roy in front. Price kicked out his left pad to stop Roy’s initial attempt, but was unable to control the rebound and made a lunging attempt as Roy lifted the shot over the goalie. 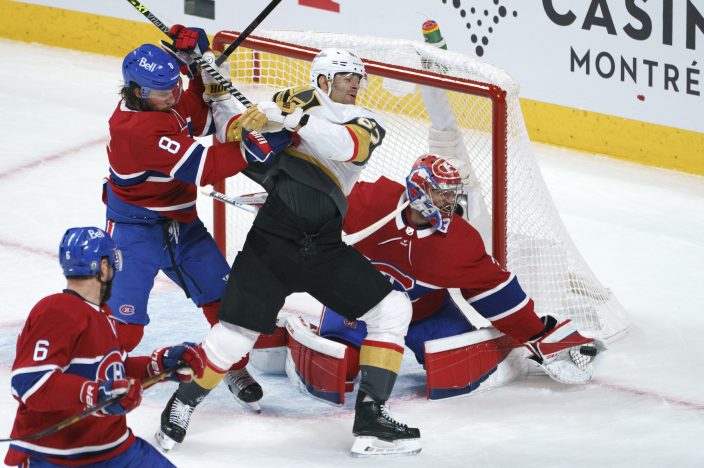 Vegas coach Peter DeBoer’s decision to start Lehner paid off. The goalie rebounded after allowing seven goals on 37 shots in a second-round series-opening 7-1 loss to Colorado on May 30.

He replaced Fleury, who is 9-6 this postseason and coming off a game in which he made a critical flub by misplaying the puck along the end boards and allowing Josh Anderson to score the tying goal with 1:55 left in Game 3 on Friday. Fleury referred to his mistake a “screwup” on Saturday, and said he was focused on looking forward.

McNabb tied the game by converting William Karlsson’s pass from behind the Montreal net with 9:23 left in regulation. Karlsson spun away from a defender in the left corner and broke behind the net to feed McNabb, who was pinching in from the right point. McNabb snapped a shot that just beat Price under the left arm. 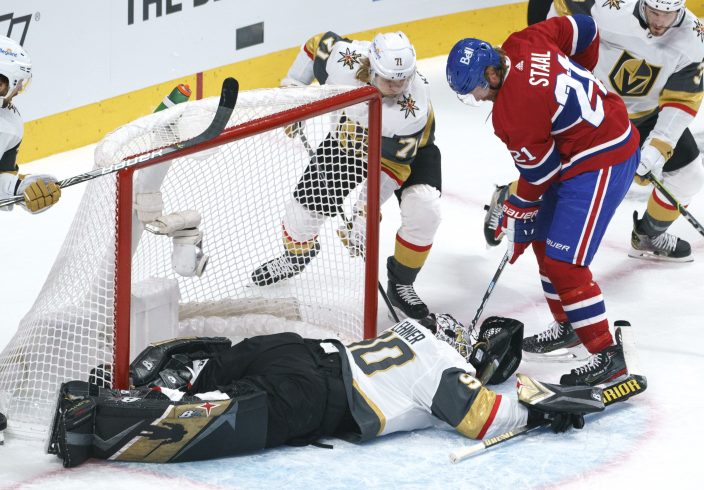 The goal came some three minutes after Lehner stood his ground to deny Cole Caufield driving the net on a breakaway. Lehner was particularly sharp in an opening period in which the Canadiens outshot Montreal 11-4 and 28-19 overall.

His best save came 12:30 in, when he kicked out his left leg to get a toe on stopping Joel Armia's redirection of Corey Perry’s pass on a 2-on-1 break.

The Canadiens’ smothering and opportunistic style frustrated Vegas through two periods, and paid off with Byron scoring on a breakaway with 1:05 left in the second period. He was set up by Nick Suzuki, who had just finished serving a hooking penalty. 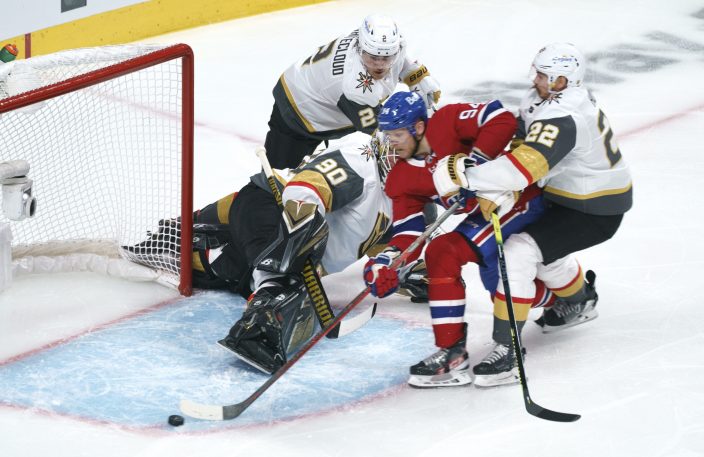 Montreal Canadiens' Corey Perry can't get the puck past a net left empty by Vegas Golden Knights goaltender Robin Lehner as he is held back by defenseman Nick Holden during the first period of Game 4 in an NHL Stanley Cup playoff hockey semifinal in Montreal, Sunday, June 20, 2021. (Paul ChiassonThe Canadian Press via AP)

In killing off Vegas’ lone opportunity, the Canadiens set a playoff record by not allowing a power-play goal in 11 consecutive games, breaking a mark held by three teams and most recently the New Jersey Devils in 2000. Montreal has killed off 26 consecutive power-play chances, and allowed just three goals 42 opportunities all postseason.

The Golden Knights entered the game with the postseason’s least productive power play, and have gone 0 of 13 in their past six, and converted just four of 39 opportunities.

The Golden Knights announced before the game that general manager Kelly McCrimmon was placed in self-isolation after testing positive for COVID-19. The team provided no other update, except to say McCrimmon is following NHL and local health protocols. 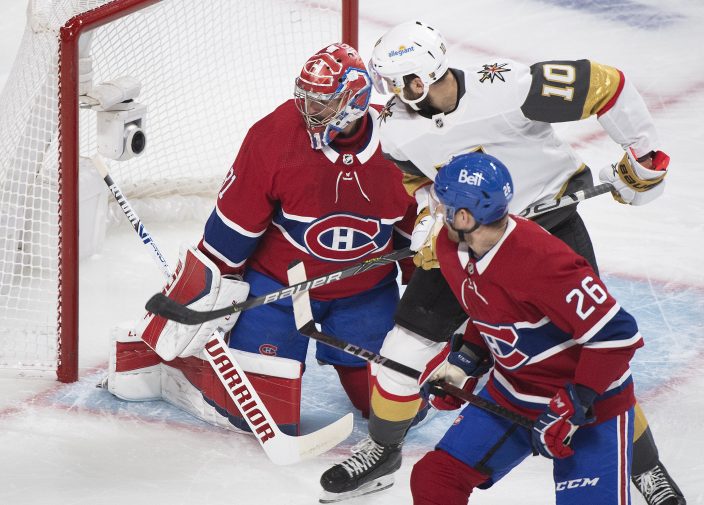 On Friday, TV cameras showed the 60-year-old McCrimmon not wearing a mask while watching Game 3 from a suite alongside team president George McPhee.

The Canadiens played their second game minus interim coach Dominique Ducharme, who was placed in self-isolation after testing positive before Game 3 on Friday. Ducharme said he remains symptom-free and hopes to return before the series ends. 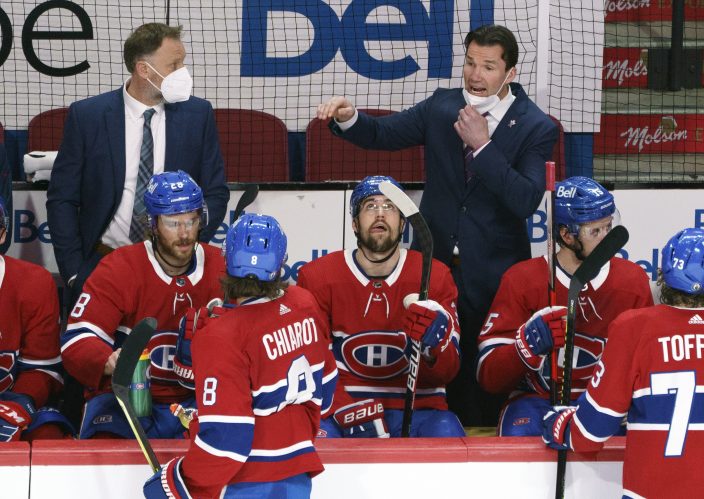 Ducharme has remained in daily touch with his players and staff by video call and texts. Growing up a Canadiens fan in Quebec, he joked having not watched a Montreal game on TV since before being hired as an assistant in 2018.

Said defenseman Ben Chiarot: “You can only imagine how he feels sitting at home watching us right now at this point of the season. We feel for him and we’re going to work to get the win for him.”

Josh Anderson became the Stanley Cup playoffs’ ninth player to score in overtime after scoring the tying goal in the final two minutes of regulation in Montreal’s 3-2 win in Game 3. Current Islanders forward Jean-Gabriel Pageau was the most recent player to do so while with Ottawa in a 6-5 double-overtime win over the Rangers in the second round of the 2017 playoffs.

Among the 3,500 fans in attendance were several former Canadiens greats, including Guy Carbonneau, Patrice Brisebois, Rejean Houle and the wife and daughter of late captain Jean Beliveau.

Golden Knights: Aside from changing goalies, forward Ryan Reaves was a healthy scratch with Patrick Brown returning to the lineup.