Until recently, the act of governing seemed to happen at the speed of presidential tweets. But now President Joe Biden is settling in for what appears will be a long, summer slog of legislating.

Congress is hunkered down, the House and Senate grinding through a monthslong stretch, lawmakers trying to draft Biden’s big infrastructure ideas into bills that could actually be signed into law. Perhaps not since the drafting of the Affordable Care Act more than a decade ago has Washington tried a legislative lift as heavy.

It’s going to take a while. 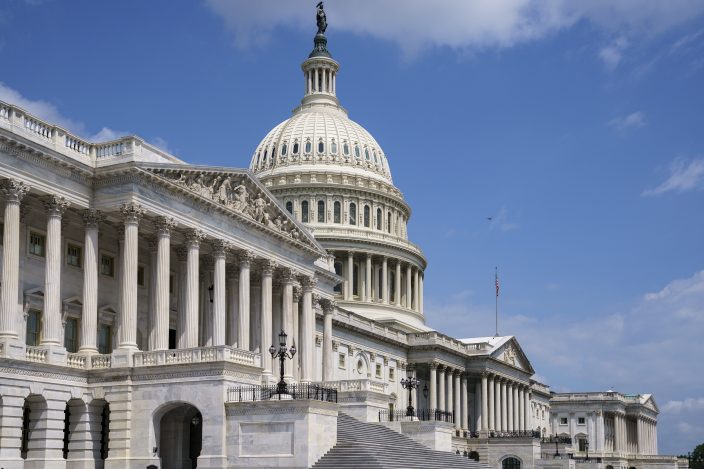 FILE - In this June 14, 2021, file photo the U.S. Capitol is seen in Washington as the House and Senate return to work. Congress is hunkered down, grinding through an eight-week stretch as the president’s Democratic allies in the House and Senate try to shape his big infrastructure ideas into bills that could actually be signed into law. Perhaps not since the drafting of Obamacare more than a decade ago has Washington tried a legislative lift as heavy as this. (AP PhotoJ. Scott Applewhite, File)

“Passing legislation is not a made-for-TV movie," said Phil Schiliro, a former legislative affairs director at the Obama White House and veteran of congressional battles, including over the health care law.

Biden appears comfortable in this space, embarked on an agenda in Congress that’s rooted in his top legislative priority — the $4 trillion “build back better” investments now being shaped as his American Jobs and American Families plans.

To land the bills on his desk, the president is relying on an old-school legislative process that can feel out of step with today's fast-moving political cycles and hopes for quick payoffs. Democrats are anxious it is taking too long and he is wasting precious time negotiating with Republicans, but Biden seems to like the laborious art of legislating. 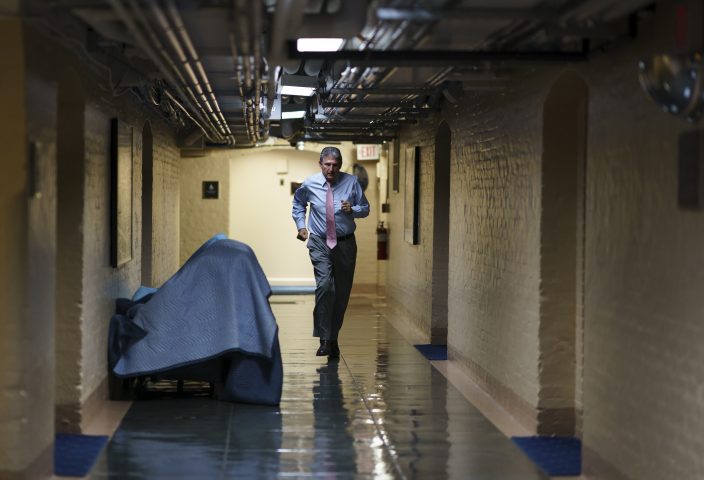 FILE - In this June 16, 2021, file photo Sen. Joe Manchin, D-W.Va., one of the key Senate infrastructure negotiators, rushes back to a basement room at the Capitol as he and other Democrats work behind closed doors, in Washington. Congress is hunkered down, grinding through an eight-week stretch as the president’s Democratic allies in the House and Senate try to shape his big infrastructure ideas into bills that could actually be signed into law. Perhaps not since the drafting of Obamacare more than a decade ago has Washington tried a legislative lift as heavy as this. (AP PhotoJ. Scott Applewhite, File)

On Monday, Biden is expected to launch another week of engagement with members of both parties, and the White House is likely at some point to hear from a bipartisan group of senators working on a scaled-back $1 trillion plan as an alternative.

At the same time, the administration is pushing ahead with the president’s own, more sweeping proposals being developed in the House and Senate budget committees, tallying as much as $6 trillion, under a process that could enable Democrats to pass it on their own. Initial votes are being eyed for late July.

“This is how negotiations work,” White House deputy press secretary Andrew Bates said during last week's twists and turns of the infrastructure negotiations.

“We continue to work closely with Democrats of all views — as well as Republicans — on the path forward. There are many possible avenues to getting this done, and we are optimistic about our chances," Bates said.

During his administration, President Donald Trump had the full sweep of Republican control of the House and Senate for the first two years of his tenure, but the limits of legislating quickly became clear.

Trump tended to govern by tweet, rather than the more traditional legislative process, bursting out with policy ideas and official administrative positions often at odds with his party in Congress.

The Trump-era results were mixed, and Republicans were unable to clinch their top legislative priority, repealing and replacing the Affordable Care Act. But they went on to secure a sizable achievement when Trump signed the GOP tax cuts into law at the end of 2017.

Sen. Rob Portman, R-Ohio, who is a leader of today's bipartisan negotiations, said Sunday on NBC's “Meet the Press” that Trump, too, proposed an infrastructure package. If Biden sticks with the bipartisan talks he could not only fulfill a campaign promise but “keep his pledge of doing things across the aisle and getting something done," Portman said.

“Everybody wants to do infrastructure," he said.

Even as Biden reaches for a bipartisan deal, skeptical Democrats are wary of a repeat of 2009, when Barack Obama was president and they spent months negotiating the details of the Affordable Care Act with Republicans. Eventually Democrats passed the package that became known as “Obamacare” on their own.

Lawmakers also have been energized by the speed at which Congress was able to approve COVID-19 relief — the massive CARES Act at the start of the pandemic in 2020 and more recently Biden's American Rescue Plan in February. They are eager for swift action on these next proposals.

Biden's strategy this time is a two-part approach. He is trying to secure a bipartisan deal on roads, bridges and broadband — the more traditional types of infrastructure — while also pursuing the broader Democratic priorities package.

The budget committees are preparing some $6 trillion in spending on what the White House calls the human infrastructure of Americans’ lives with child care centers, community colleges and elder care in Biden's plans, adding in Democrats' other long-running ideas. Among them, expanding Medicare for seniors with vision, hearing and dental services, and lowering the eligibility age to 60.

Regardless of whether Biden succeeds or fails in the on-again-off-again talks with Republicans, Democrats will press on with their own massive package, the president at least having showed he tried.

“There are two kinds of negotiation," said Democrat Barney Frank, the former congressman and committee chairman from Massachusetts who was central to many Obama-era legislative battles. “One that will be successful and give you a good bill,” he said, and the other that will be unsuccessful, but will at least “take away any stigma of being partisan.”

Congress is eyeing an end-of-summer deadline to launch the budget reconciliation process, which would allow passage of the bills on majority votes, notably in the now split 50-50 Senate where 60 votes are typically required to advance legislation.

After that, the House and Senate would prepare the actual packages for votes in fall.

As the process drags on, it's a reminder that it took more than a year in Congress to pass Affordable Care Act, which was signed into law in spring 2010.

“Tweets are so easy,” Schiliro said. “Legislating is different from that, so to develop good legislation takes time.”