Alex Palou was racing in Japan two years ago and dreaming of the possibility he one day might get the chance to compete in the Indianapolis 500.

Now the 24-year-old Spaniard finds himself leading the IndyCar points standings in just his second year on the circuit.

“I’ve been super lucky in my life to be able to be here,” Palou said Sunday after winning at Road America and overtaking Pato O’Ward for the points lead. 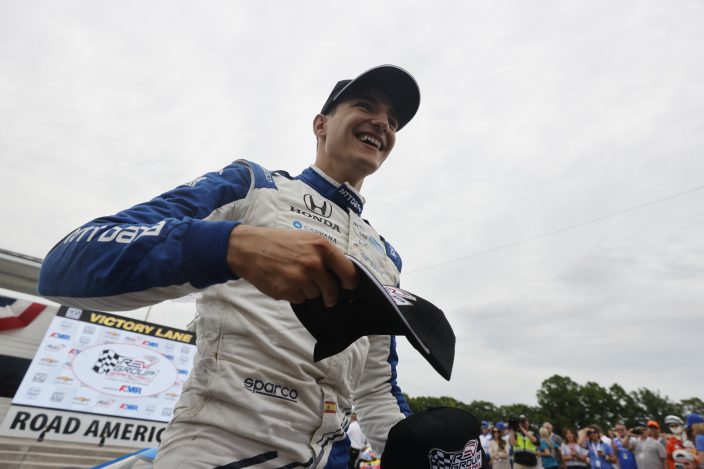 “That was my dream, like not 10 years ago, it was like two years ago that I was in Japan looking at all the races in IndyCar and asking myself if there was a chance I could be here. It’s not like it’s been work that’s been in the works for like 20 years. It’s been like super recent.”

After earning his first career IndyCar victory in the season opener at Barber Motorsports Park in Alabama, Palou won again Sunday by sailing past Josef Newgarden on a restart with two laps remaining at Road America. 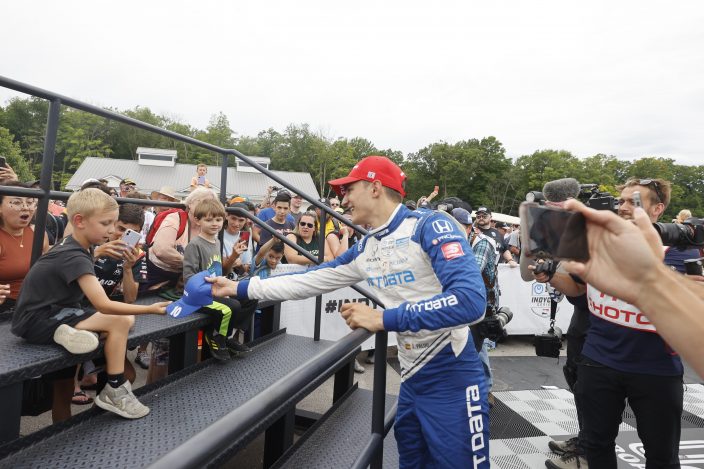 It made Palou the first Ganassi driver other than Dixon to win at least two races in the same season since Dario Franchitti in 2011.

Tony Kanaan, the 2013 Indy 500 winner and the 2004 points champion, said Palou is the best teammate Dixon has had since Franchitti retired at the end of the 2013 season. Kanaan spent four seasons in Palou’s car. 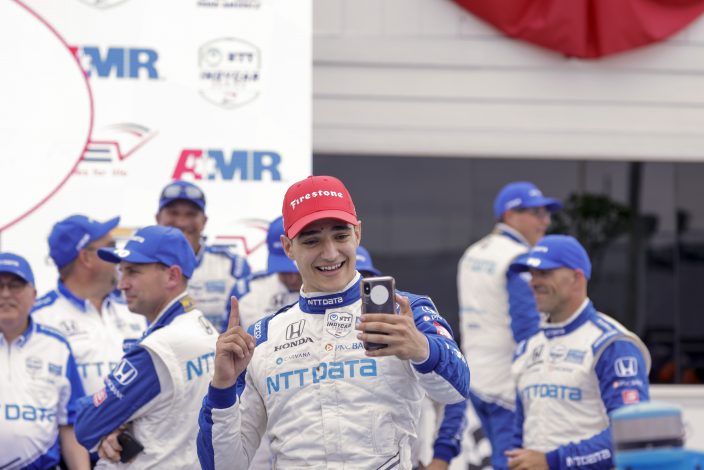 Alex Palou celebrates with his phone in the Winner's Circle after an IndyCar race at Road America in Elkhart Lake, Wisc., Sunday, June 20, 2021. (AP PhotoJeffrey Phelps)

Palou’s amazement at his rapid rise shouldn’t be interpreted as a lack of confidence in his abilities.

His belief in himself was evident in the days leading up to the 2019 Indy 500, when he tweeted out a picture from the Indianapolis Motor Speedway and included the message, “One day Alex. One day …”

Palou was driving on the Super Formula circuit in Japan that year. He earlier had competed in the All-Japan Formula 3 championship.

“The first dream was to be part of IndyCar,” Palou said. “You cannot win a championship without being a part of IndyCar. But then I don’t want to be around here doing laps. I want to be here competing and winning.”

That’s what he’s been doing since moving to Ganassi this year after a rookie season with Dale Coyne Racing.

Palou’s emergence started at Road America last year with a third-place finish that marked the best performance of his rookie season. He’s reached another level with Ganassi, where he replaced Felix Rosenqvist in the No. 10 Honda.

Palou’s victory Sunday at Road America opened the second half of the IndyCar season and gave him a 28-point lead over O’Ward in the points race. Even though he’s in the early stages of his career, Palou already understands the approach he will need to make a legitimate run at the points title.

“You win championships by winning races and then staying consistent,” Palou said. “If you have a car to finish second, you finish second. You don’t have to go and try and win that and end up in the fence.

“There’s going to be days where we have a car to finish fifth, and that’s the best we can do. But when we have a chance to win, we have to take that. That’s what I think that Scott has been doing for the past years, and he’s the best at it, as we can see.”

Dixon is third in the standings, 25 points behind O’Ward and 53 back of Palou.

Palou credits Dixon for answering all his questions and guiding him along this season. Palou was asked Sunday whether that might change later this season if the two teammates end up competing for the points title.

“I don’t know what he’s going to do,” Palou said. “I know what I would do if I was in his position, and that wouldn’t help me. But, yeah, I think he’s at the point like he won six championships, so he doesn’t have to show anything, and he wants the team to be up there. If I go well, he’s going to go well, as well, because that means we have a good car.

“I don’t know if going into the last race and we are matching points, maybe then he’s not going to talk to me, like that would be obvious. But, yeah, I hope that happens. That would be amazing for the team.”