With Michael Phelps five years into retirement, the stage is set in Tokyo for Caeleb Dressel. Katie Ledecky is ready to extend her dominance, competing in four individual events plus relays at the pandemic-delayed Olympics.

They lead a powerful U.S. swimming team that is expected to top the medals standings once again. No world records were set at the eight-day trials that ended Sunday, but the Americans figure to flash their speed with gold on the line. 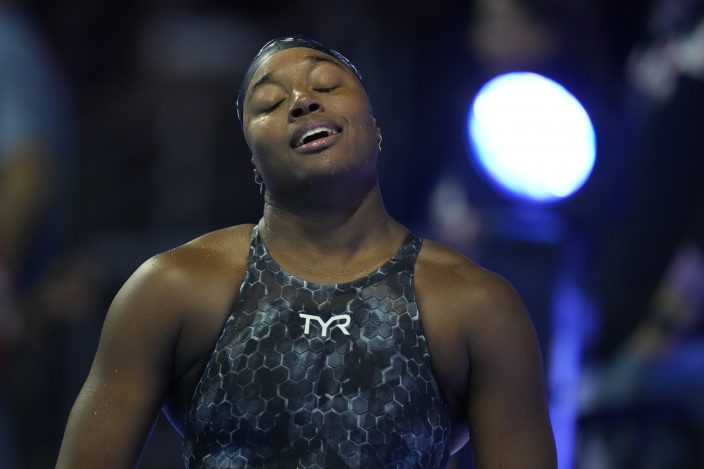 Dressel made the team in the 50 and 100 freestyles and the 100 butterfly. He could swim in at least three relays in Tokyo, including the new mixed 4x100 medley featuring men and women.

He closed his trials by tying his American record of 21.04 seconds in the 50 free, fastest in the world this year.

“There is plenty we can do to get better and move forward from this,” he said. “This was a really fun meet. I got better with each event. I'm ready to get back in the water with a plan.” 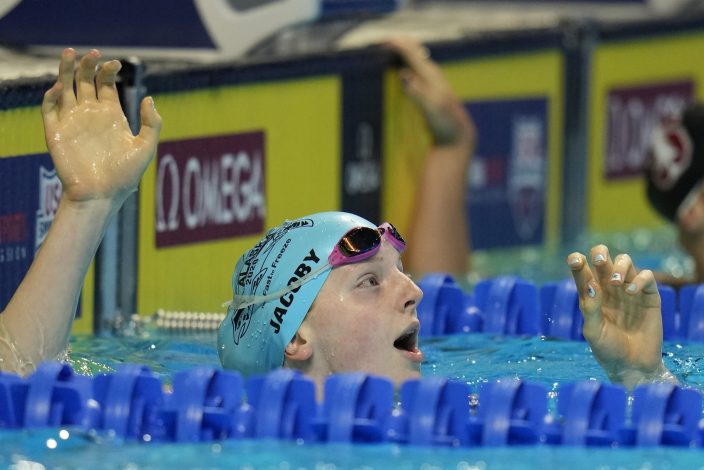 Lydia Jacoby reacts after winning her heat in the Women's 100 Breaststroke during wave 2 of the U.S. Olympic Swim Trials on Monday, June 14, 2021, in Omaha, Neb. (AP PhotoJeff Roberson)

Five years ago in Rio, Dressel won two gold medals as part of relays. Since then, he won 13 gold medals and two silvers at the world championships in 2017 and 2019.

Tabbed as the potential successor to Phelps, Dressel will be under intense pressure and scrutiny in Tokyo. But she won't be favored in the 200 or 400, where Ledecky faces a potential showdown with Ariarne Titmus of Australia. Ledecky surprised herself with times that were not as fast as she had expected in Omaha.

“I don't think we have to get too caught up in what times people are going here versus anywhere else in the world right now,” she said. 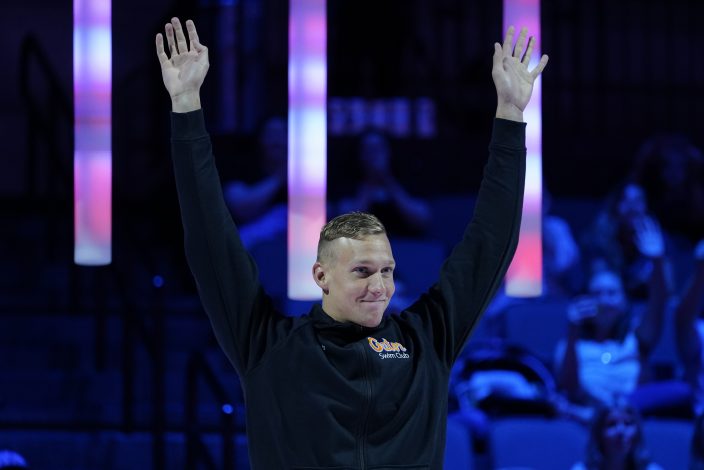 Caeleb Dressel reacts at the medal ceremony for the men's 50 freestyle during wave 2 of the U.S. Olympic Swim Trials on Sunday, June 20, 2021, in Omaha, Neb. (AP PhotoCharlie Neibergall)

Simone Manuel fought back after missing the team in the 100 freestyle, winning the 50 free on the last night of trials.

Days after revealing she had been diagnosed with overtraining syndrome in March, Manuel gathered enough speed to hold off Abbey Weitzeil by one-hundredth of a second, winning in 24.29. It was a popular victory, with fans on their feet cheering. Weitzeil was silently cheering as she raced alongside Manuel.

Manuel won't defend her historic gold in the 100 free from Rio, where she was the first Black woman to win an Olympic swimming medal. She'll be joined in Tokyo by Natalie Hinds, a Black swimmer who made her first Olympic team at 27.

Manuel's teammates are glad to have her experience and leadership.

BY WAY OF ALASKA

Lydia Jacoby is the first swimmer from Alaska to make a U.S. Olympic team.

The 17-year-old from Seward qualified in the 100 breaststroke. This fall she plans to return to return to high school for her senior year after being home-schooled during the pandemic. She has verbally committed to swim at Texas. When she's not in the pool, Jacoby plays double bass, guitar, piano and sings.

Jake Mitchell made the most of his do-over.

He went too slow in the 400 free to meet the Olympic qualifying standard, finishing second behind winner Kieran Smith in a time of 3 minutes, 48.17 seconds. Usually second is good enough to earn a spot on the Olympic team, but not this time.

Mitchell got a second chance, though.

He swam a time trial in the temporary 50-meter pool all by himself. He went over 2 seconds faster than his previous time, touching in 3:45.86 to punch his ticket to Tokyo. That was good enough to meet the qualifying standard of 3:46.78.

Mitchell, of Carmel, Indiana, recently wrapped up his first year at Michigan, where he was named Big Ten freshman of the year.

Phelps and his 23 Olympic gold medals are retired to Arizona. But the coach who guided him to all that success will be in Tokyo. Bob Bowman has two swimmers on the team: Hali Flickinger in the 200 butterfly and 400 individual medley, and 31-year-old Allison Schmitt in the 200 free and 4x100 free relay.

FAREWELL TO THE VETS

“They left behind some really big shoes to fill,” Dressel said. “It doesn't just fall on my shoulders. Everyone who is on the team, we're going to have to pick up the pace, because what they left behind is huge.”