Everyone who’s played it, from the late, great Ben Hogan to the guys you get paired with down at the local muni, has probably said it at one time or another: Golf is a game of misses. It also happens to be the shortest way to explain how Jon Rahm won the U.S. Open.

Take nothing away from the 26-year-old Spaniard. Whatever shots Rahm missed didn’t miss by much. His final-round 67 included only one bogey and tied the low score on the day.

Guys who’ve played the PGA Tour for longer than he’s been alive have never made two putts in a row as delicate as the almost-identical sidewinders he cashed in for birdies on the last two holes of a major. 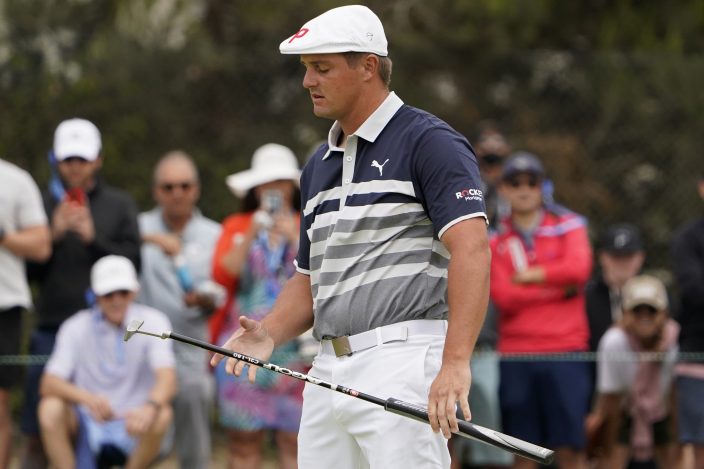 Bryson DeChambeau reacts after missing a putt on the 10th green during the final round of the U.S. Open Golf Championship, Sunday, June 20, 2021, at Torrey Pines Golf Course in San Diego. (AP PhotoJae C. Hong)

“I mean, I might have looked calm,” Rahm said afterward. “I was not calm. I wish people could see our heart rate when we’re playing in those moments because that was tense.

“But you practice to let your body basically take over, right?” he added. “That’s what I did.”

It’s more difficult than Rahm made it sound, to be sure. Yet he generates fearsome power from one of the shortest backswings on the PGA Tour, which also makes it a lot simpler to repeat. That’s why so many fellow pros tabbed Rahm as the game’s next superstar not long after he joined their ranks — fewer moving parts means less to screw up coming down the pressure-packed stretch of a tough tournament like the U.S. Open. 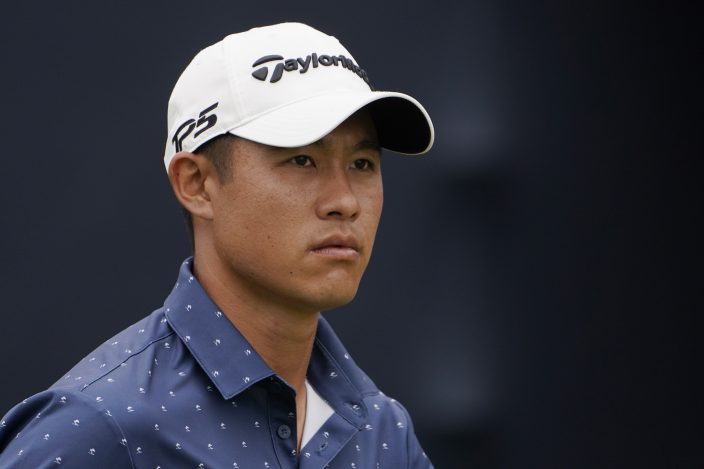 Collin Morikawa walks off the on the seventh tee during the final round of the U.S. Open Golf Championship, Sunday, June 20, 2021, at Torrey Pines Golf Course in San Diego. (AP PhotoJae C. Hong)

“I don’t think there’s a golf course where he can’t have success on,” said Rory McIlory, who shot 72 and finished in a tie for seventh. "He’s that good of a player. He was a major champion in waiting. It was just a matter of time.”

By mid-afternoon, there were 10 players within two shots of the lead – hard-boiled major champions and can’t-miss prospects – and then a game of musical chairs broke out. Suddenly, everybody started missing. 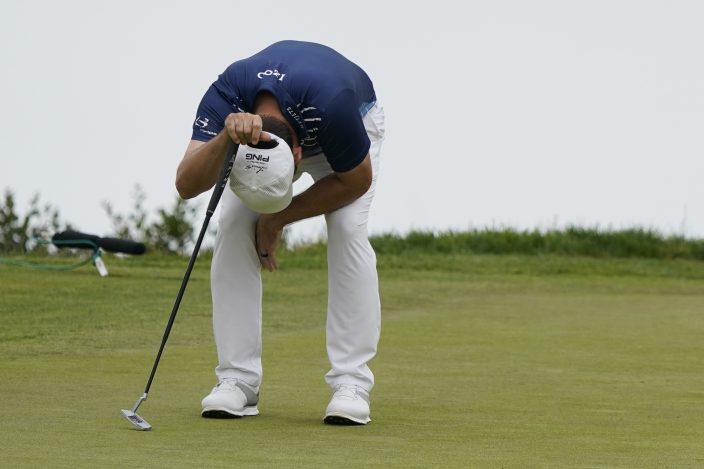 Louis Oosthuizen, of South Africa, reacts to his missed birdie putt on the sixth green during the final round of the U.S. Open Golf Championship, Sunday, June 20, 2021, at Torrey Pines Golf Course in San Diego. (AP PhotoMarcio Jose Sanchez)

McIlroy three-putted the 11th, then made double bogey from a bunker at No. 12. Morikawa made double at No. 13. Koepka, who shot 32 on the front nine, came home in 37. Oosthuizen was the last player to lose his seat, hooking his tee shot on 17 into a canyon. Yet none of them flamed out like DeChambeau.

He led briefly after a tap-in birdie at the par-3 8th, then played the back nine in 44. He went bogey-bogey-double bogey at Nos. 11, 12 and 13, and just for good measure, sent a drive into the same canyon as Oosthuizen at No. 17 and shanked a chip shot farther up the fairway for quadruple-bogey there.

“I didn’t get off the rails at all,” said DeChambeau, who probably should avoid any replays. “It’s golf. I’ve had plenty of times where I hit it way worse than today and I won. 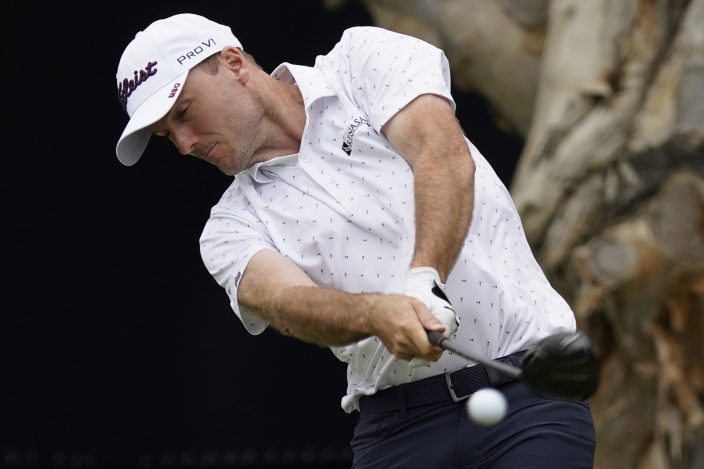 Russell Henley plays his shot from the seventh tee during the final round of the U.S. Open Golf Championship, Sunday, June 20, 2021, at Torrey Pines Golf Course in San Diego. (AP PhotoMarcio Jose Sanchez)

“It’s just one of those things,” he said finally, “where I didn’t have the right breaks happen at the right time.”

OK. And it’s probably just coincidence, too, that Rahm was the only player who didn’t drop a shot on the back nine.

“I’m not going to lie,” Rahm said. “I was trying not to look at the leaderboards, but the crowd was not cooperating. They were telling me exactly what was going on. So I decided to embrace it.

“You see all those great names, and to myself I thought whoever wins this one is going to be the one who won a U.S. Open with a star-packed leaderboard. I just -- after I thought that, I went about my business. That was about the 10th hole,” he recalled. “I knew I had to survive the next two holes and hopefully give myself a chance on the next five. I did.”

That he did it as a brand-new father on Father’s Day, as the first Spaniard ever to win the U.S. Open, and less than two weeks after he had to withdraw from the Memorial with a 6-shot lead after three rounds because of a positive COVID test, made his win seem almost pre-ordained.

“Just because it felt like such a fairy tale story that I knew it was going to have a happy ending.” Rahm said. “I could just tell, just going down the fairway after that first tee shot, that second shot, and that birdie, I knew there was something special in the air. I could just feel it.”

And there was no way he was going to miss that.