Australian Prime Minister Scott Morrison will soon announce changes to his Cabinet after a scandal-tarnished colleague was elevated to deputy prime minister on Monday.

As the Nationals new leader, Joyce becomes deputy prime minister and is entitled to a Cabinet post. He will be sworn in on Tuesday. 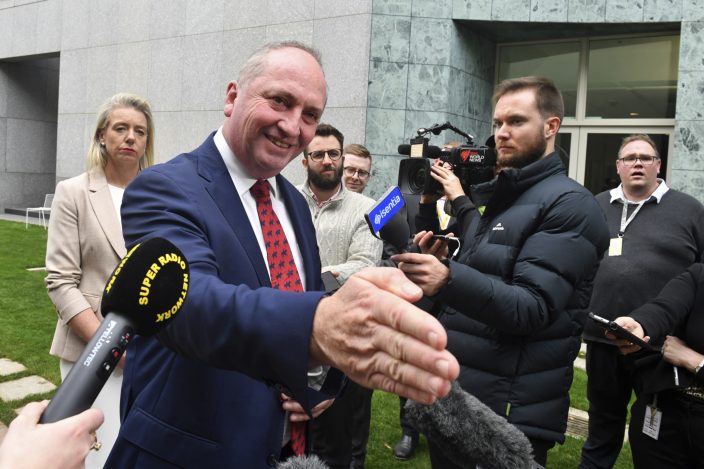 Joyce is expected to negotiate with Morrison to reward Joyce supporters with promotions.

“I acknowledge my faults. I resigned as I should and I did,” he told reporters at Parliament House.

“I’ve spent three years on the backbench and I hope I come back a better person,” Joyce said, referring to the seats in Parliament behind the ministers.

Critics of McCormack within the Nationals accused him of being too subservient to the dominant conservative Liberal Party.

Morrison will call Australia's next election between August and next May. Some government lawmakers fear that Joyce’s return to Cabinet will bolster criticism that the ruling conservative coalition is a toxic environment for women.

McCormack became party leader three years ago after Joyce quit over businesswoman Catherine Marriott’s allegation that he sexually harassed her. Joyce denied the allegation, and Marriott said the party told her it found insufficient evidence to substantiate her complaint.

Joyce described the allegation as the final straw for his leadership after revelations that he had left the mother of his four daughters and was about to have a child with a former staffer.

Then-Prime Minister Malcolm Turnbull accused his deputy of making a “shocking error of judgment" and banned his ministers from having sex with staff. Morrison, Turnbull’s successor, has maintained the ban.

Morrison last changed his ministers in March when two ministers implicated in sex scandals were demoted.

Australian leader warns of a resurgence in asylum seekers